The Ohio division of the American Petroleum Institute (API Ohio) recently issued a press release urging members of the “Ohio legislature to reject legislation that would subsidize nuclear power companies, and called on corporate supporters of the legislation to stop misleading Ohio consumers with false information on the economic and environmental consequences of shuttering nuclear power plants in the state.”

The Wall Street Journal (see Oil-Gas Lobby Opposes State Subsidies for Nuclear Power Producers) and Environmental Progress (see Big Oil is trying to kill clean energy in Ohio and Pennsylvania. Here’s who will pay the price.) have taken note of the API’s activities in Ohio.

This is one more example of what might be an important trend in the long running conversation about energy supply and consumption. It appears that at least part of the oil and gas industry has decided it’s time to openly battle nuclear energy so that it can capture additional energy market share.

Unsurprisingly, NCPC’s efforts didn’t work very well. It wasn’t easy to convince Americans and their elected officials to stop investing in the new thing – atomic energy – to protect King Coal, the railroads that carried the coal and the unions that occasionally held the entire country hostage during strikes. By 1970, perhaps partly as a result of acquisitions of coal companies by the more PR savvy oil and gas industry, investments in the NCPC fell off. The organization was disbanded in 1971.

Though it’s not easy to find meeting minutes or to point to a specific strategy document with clear talking points, it’s reasonable to assume that there were numerous thoughtful discussions in the 1960s among skilled propagandists about the best way to respond to the rapidly growing threat from nuclear energy.

The results of those discussions can be discerned by looking at that actions that are a matter of historical record.

Since the late 1960s and early 1970s, most of the voices associated with what I generally refer to as “fossil fuel interests” have been notably quiet about nuclear energy. If possible, they have avoided the subject entirely, neither voicing support or opposition in public. Instead of actively engaging in the almost-expected business behavior of criticizing and opposing market competitors, they have followed a strategy of allowing surrogates to be the public faces of the opposition to nuclear energy. 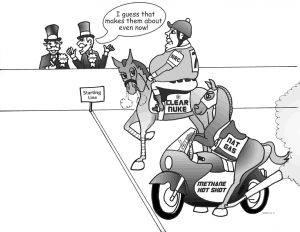 It also invested substantial resources in technological improvements that improved its ability to produce higher quality products in ever increasing quantity.

The nuclear industry, started by engineers, scientists and business developers used to working on government or monopoly utility projects, didn’t recognize the competitive landscape. It was poorly equipped to fend off the accumulating burdens, partially because it was used to the customers picking up any additional costs imposed by changing rules and requirements.

During several periods of time, the nuclear industry accepted so many burdens that nearly all of its capital was expended in reacting to criticism by adding complex systems that were often designed to be idle nearly 100% of the time. Browns Ferry, Three Mile Island, 911 and Fukushima were all used to justify efforts that interfered with numerous improvement initiatives that would have lowered costs and increased production capacity.

Now that groups like API Ohio, the Pennsylvania Independent Oil and Gas Association and Marcellus Shale Coalition have decided to openly engage in opposition to nuclear energy, perhaps the industry will take the steps necessary to mature and prosper.

I understand what Alex Epstein calls “The Moral Case for Fossil Fuels.” I am an unabashed and unashamed consumer who enjoys the good things that abundant availability of hydrocarbon power gives to society. Fossil fuels can be extracted, transported, refined, distributed and consumed in ways that harm the environment less than most non-nuclear alternative for producing an equal amount of power.

Since our current world population has so many people who have cannot access or afford the reliable energy that enables the kind of comfortable lifestyle taken for granted in the mid to upper echelons of developed countries, there is a lot more room for increased energy consumption than most current models predict.

If energy suppliers would invest more effort in growing the overall size of the pie they would have less reason to kneecap each other. Instead, they now fight over a slowly growing market that is full of customers that might be interested in buying more power to improve their lives and control their living conditions. Unfortunately, the energy industry has invested a big chunk of its communications resources convincing people to feel guilty about using its valuable and lifestyle enabling products.

Rod, you lost me at

What evidence do you have utilities inhabit a “competitive landscape”? Utilities are monopolies, and have been for the last century. But for seventy years they were regulated monopolies.

From 1935 to 2005, they were required by the federal government to charge rates which are “in the public interest”, usually on a cost-plus basis. They were always profitable, whether they generated electricity with coal, nuclear energy, or hamster wheels.

In 2005 George W. Bush and Republican allies in Congress de-regulated electricity generation by repealing FDR’s Public Utility Holding Company Act. Utilities were freed from SEC oversight, enabling them to revert to the labyrinthine holding-company structures they had used to fleece the public during the Roaring Twenties. More importantly, prohibitions on political contributions and lobbying were removed, granting them unfettered influence on local public utility commissions which were supposed to pick up where the SEC left off.

The nonsense we hear about nuclear not being “competitive” can be traced to 2005. Now, it’s only “less exploitable” – and in the Trumpian political landscape, that’s not good enough.