633 advanced energy storage projects encompassing 865 separate systems are currently in operation or under development worldwide, according to Navigant Research’s “Energy Storage Tracker 3Q13.” The industry added 38 new projects during the first half of 2013.

Even though global energy storage markets are growing fast, up from 562 projects at the end of 2012, they remain fragmented in both technologies in use and applications in each region. France’s Alstom leads all vendors with 19% of total market share, closely followed by Germany’s Voith with 16%, and America’s Gridflex with 13%

The rapid spread of advanced energy storage is creating distinct economic and environmental benefits in each major market, and in some regions may even help developing countries leapfrog fossil fuel based energy systems.

For instance, Navigant notes Asian countries are focused on developing advanced battery systems with the intent to export them to other nations, while Europe is directing investment in order to help integrate a larger share of renewable energy, and North America is characterized by innovation and technological diversity. 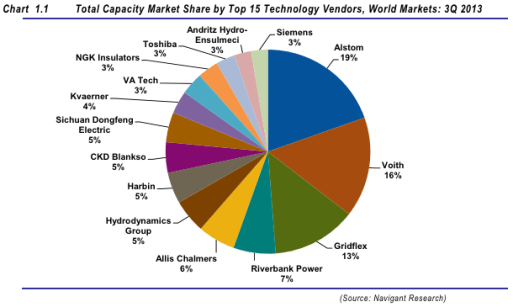 While different regional focuses are creating different benefits, all markets seem to be succeeding. “In terms of regional capacity, Asia Pacific continues to be the world leader in deployed capacity, with almost 1.2 GW representing 47% of global capacity,” said Anissa Dehamma of Navigant. “In terms of installed projects, however, North America leads with 115 deployments.”

A white paper from the Alliance for Rural Electrification (ARE) recently found that energy storage could combat energy poverty by serving as both a hub for off-grid energy systems based on distributed renewables, and as decentralized grid backup in growing communities without sufficient transmission or electrical access. ARE based this outlook on case studies from India, Bangladesh, Jordan, Peru, and Mozambique.

But moving beyond theoretical applications, the energy storage industry’s growth is starting to turn into utility-scale applications in the real world. The largest European energy storage project yet, a 6-megawatt battery designed to store wind and solar power with a 10 megawatt-hour (MWh) capacity, was recently announced in the United Kingdom.

Not to be outdone, Japan’s Hokkaido Electric Utility recently announced it was investing $200 million to build a 60 MWh battery project. Once online in 2015, the system will store energy from solar and wind farms to power communities across Hokkaido Island, which is isolated from the mainland’s grid system.

Notable smaller-scale projects that use innovative approaches also popping up across the world, such as the GM-ABB project featuring used Chevy Volt batteries or Toyota’s effort to convert recycled hybrid batteries into energy storage systems for its Japanese dealerships.

Batteries are alright for short-term storage to even out hourly fluctuations in wind or solar output. But they are hopelessly inadequate for seasonal electricity storage on a grid with a significant share of variable renewables.

In most countries, batteries and pumed hydro could only cover a fraction of the necessary storage volume. This leaves power-to-gas as the only option.  Sadly, the round-trip efficiency of power-to-gas is terrible.

In Germany, there are a few power-to-gas demonstration units feeding synthetic methane into the gas grid already. Syngas is produced using hydrogen from an electrolyser and CO2 from a biogas plant.

“This leaves power-to-gas as the only option.”

There is another fuel-synthesis system that is cheaper and more scalable than synthetic methane: ammonia (NH3).  Methane synthesis requires a carbon source (which will not be easy in a future zero-fossil energy system), but ammonia only requires nitrogen, which is 80% of the atmosphere.  Ammonia is and likely always will be the cheapest fuel that can be made from solar, wind, OTEC, or nuclear power.

Of course biomass is a possible source of carbon for fuel synthesis, but remember that in a non-fossil-energy future, biofuel must supply carbon to power all devices which require hydro-carbon fuel:  aircraft, motorcycles, lawn mowers, passenger boats and ship.  Powering cars, trucks, and trains (which comprise the majority of transportation fuel demand) with a non-carbon fuel will greatly ease pressure on the world’s wild habitats.

Additionally, ammonia is much easier to store in large quantities than methane (or H2), since ammonia is a non-pressurized liquid when chilled to -33C or a pressurized room-temp liquid at 150 psi (but methane and H2 are only liquid at cryogenic temperatures).

The new high temperature ceramic fuel cells that are marketed for use with methane also work with ammonia.  Additionally, a new class of PCC (proton-conducting ceramic) fuel cells is being developed which can not only be fueled with ammonia, but can be operated in reverse to produce ammonia from steam and nitrogen, in a robust solid-state system.