49 Percent Of New US Electricity Capacity Is From Solar Energy A couple of big solar records were set in Q1 2013 in the US. For one, 49% of all new US electricity generation capacity came form solar, the most ever for a first quarter. Secondly, 723 MW of solar power capacity were installed and put online, again a Q1 record for the US. Let’s run down a bunch more of the facts and highlights from the Solar Energy Industries Association’s (SEIA) and GTM Research’s latest US Solar Market Insight® quarterly report. 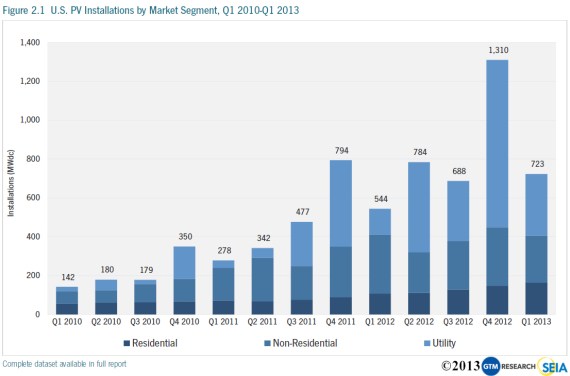 As you can see in the chart above, Q1 2013 was just the 4th best quarter to date for solar installation capacity. However, for various reasons, Q4 is generally the best quarter of the year and Q1 the worst, so that’s actually quite a good ranking.

Also, utility-scale projects really throw quarter-by-quarter comparisons out of wack. As SEIA writes: “As always, it is important to take the utility market out of the equation when seeking meaningful conclusions from the comparison of quarterly installation figures; the utility market is simply too volatile and dependent on individual project timelines. In that context, Q1 was quite strong in the residential market (53% year-over-year growth) and weak in the non-residential market (down 20% year-over-year). This reflects our general outlook for the year; we expect significantly stronger growth in the residential market than the non-residential market. Utility installations were down substantially from Q4 2012, but up more than 130% relative to Q1 2012. This market generally experiences a boom in the fourth quarter and we expect the same pattern to hold in 2013.”

Remember that this growth is projected to continue throughout the year, with solar projected to become the #2 source of new power capacity in the US in 2013 as a whole, only behind natural gas.

In total, at the end of Q1, US solar power installation capacity stood at 7,962 MW. 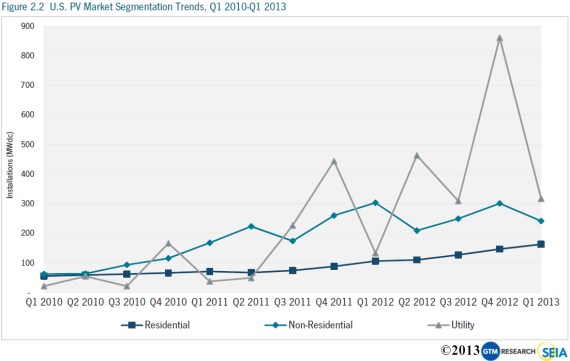 SEIA highlighted utility-scale solar’s role in 2012′s record-crushing year, but it also went on to note that the future is going to be about distributed (residential and commercial) solar. 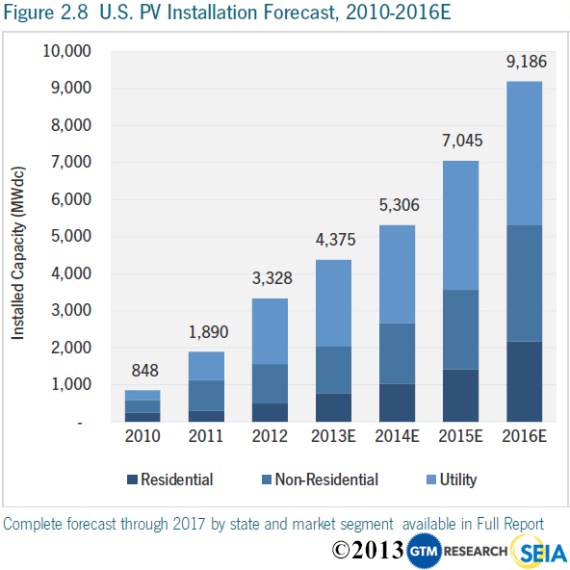 Here’s more from SEIA on the revolution: “We expect that the next four years will be marked by a new solar revolution in the U.S., this time driven by the distributed generation (DG) market. Whereas residential and commercial solar markets have historically been effectively capped by the availability of state- and utility-level incentives, solar has now become cost-effective in some markets with only the federal investment tax credit (ITC), accelerated depreciation and net metering. This report highlights this shift in California, where a meaningful number of installations have been completed without California Solar Initiative incentives, which have been that market’s main driver since 2007.”

The solar revolution has been one of the concepts that seems to get people most excited, and seems to most influence the sharing of solar stories on CleanTechnica and elsewhere. It is an exciting concept. And we are clearly living in an exciting time.

Regarding California, let’s also remember that nearly 100% of new electricity generation capacity in the state in the second half of 2013 is projected to come from solar power. That’s outstanding, amazing. The revolution really seems to be starting.

However, SEIA aptly notes that there are some huge obstacles that could slow the revolution, considerably even, and citizen as well as business and political support is needed in order to make sure they don’t (or do to as little a degree as possible). Again, from SEIA:

With the ITC currently in place through the end of 2016 and PV system prices continuing to fall each quarter, the DG market’s prospects have never been better. However, with this opportunity comes a new set of risks:

In the absence of these limiting factors, residential and commercial PV could grow exponentially through 2016.

One of my favorite things about this report is the pricing information that is provided. In Q1, the “blended” installed price of solar actually went up a bit (compared to Q4 2012). However, the price for each segment of the market went down. Confused? Again, the reason is simply that utility-scale solar (which is cheaper) accounted for a much smaller percentage of solar power installations. 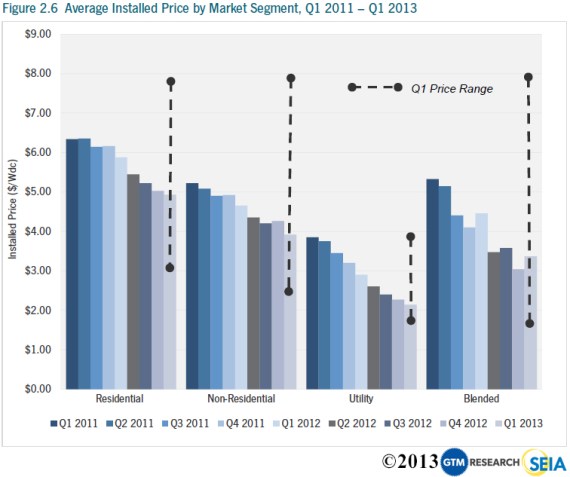 The blended price (or “national capacity-weighted average system price”) went up from $3.04 per watt to $3.37 per watt. However, as you can see above, everything else is down, and compared to Q1 2012, prices are way down. From SEIA:

Naturally, across the US, which is larger geographically than Europe, and very diverse in its solar policies and market saturation, prices varied considerably. “Common residential system prices ranged from less than $3.00/W to almost $8.00/W. Non-residential prices were as low as $2.50/W and as high as $8.00/W.” 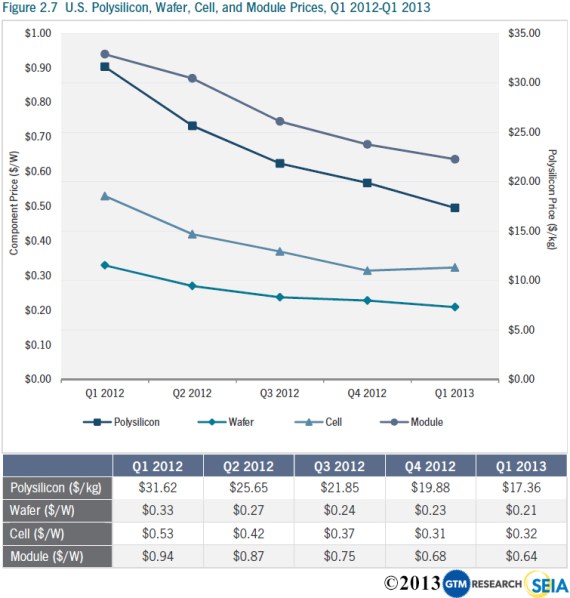 Regarding specific solar PV components, above is a graph on key price trends.

“Pricing for polysilicon and PV components remained soft in Q1 2013 due to the persistence of the global oversupply environment that the industry has faced since early 2011.  Blended polysilicon prices declined by 13% to $17/kg, while blended module average selling prices (ASPs) for Q1 2013 were down to $0.64/W, 6% below Q4 2012 levels of $0.68/W. Cells were the sole component to experience a pricing uptick in the first quarter, but as global component supply and demand begin to come back into balance, the steady downward pricing trend of the past few years could slow or stop in coming quarters.” 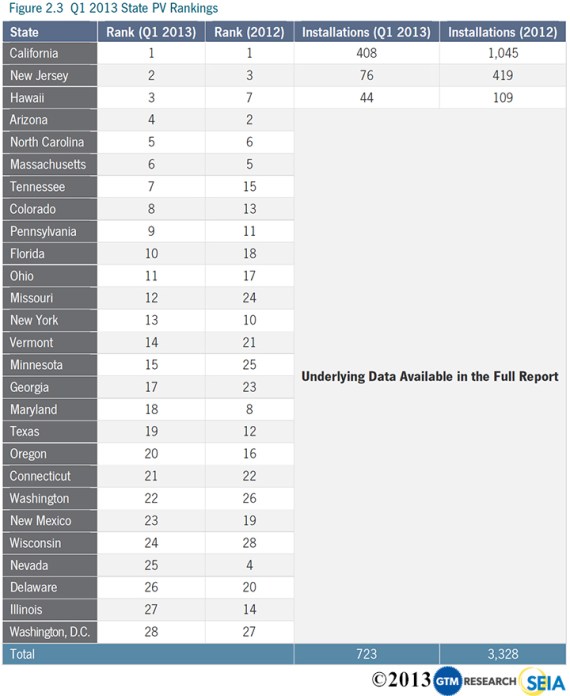 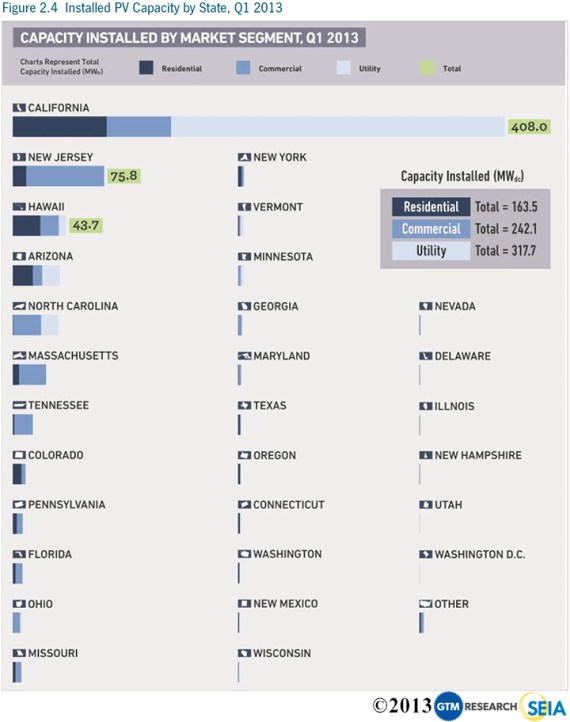 Here are some more facts from SEIA:

A lot more information is available in SEIA’s US Solar Market Insight® Executive Summary, and surely the report itself. Dig in if you want to learn even more.

49% Of New US Electricity Capacity Is From Solar, Q1 Record (Report) was originally published on: CleanTechnica. To read more from CleanTechnica, join over 30,000 others and subscribe to our free RSS feed, follow us on Facebook (also free!), follow us on Twitter, or just visit our homepage (yep, free).

Rooftop PV has long been the favorite of greens, but concentrating solar power has many advantages (potentially lower cost, flatter output during the day, better EROI, less toxic material use, better safety, possible compatibility with vegetation underneath, and the higher capacity factor means that it is more cost effective when used with long distance transmission or fuel synthesis).

It is nice to see that CSP is starting to gain traction.

Also, note that CPV is back, with Sunpower C7.

This is a great article but it could be better. Renewable energy, in particular solar and wind, are obviously the future. The electricity they produce can be tracked. Everytime a new article comes out, like this one, it needs to be categorized properly. Put into a tapestry something like the one below. Where we can see the total percentage a particular energy source contributed along with the growth it achieved in that time period. There are probably better ways to categorize. Something quick and simple, with references, that puts an end to silly debates. I’m thinking a table like this:

Maybe this could be a top level page on your site that is simply referenced from these articles. And the articles need to be compared with these tables so anything out of the ordinary can be addressed.

What’s brought me back to this article was this article at Forbes. (I dislike Forbes immensely and was thinking of posting there but realized I didn’t have enough facts.) http://www.forbes.com/sites/jeffmcmahon/2013/06/16/fracking-not-wind-kil...

It would be wonderful to reply to articles like that and say electricty usage over that time period remained steady at X. And though the article is right that natural gas destroyed nuclear’s future the combined percentage of energy generated by natural gas, nuclear, and coal declined by Y% while wind and solar’s total market share increased by Z%.

Any chance of putting together a table like that with references to where the actual numbers come from?