Pro-solar energy state-level energy policies are arguably as strong right now as they’ve ever been across America, just in time for consumers to take advantage of affordable technologies to generate their own clean electricity.

Vote Solar and the Interstate Renewable Energy Council (IREC) concluded the policy outlook for distributed generation from solar energy is bright as ever in Freeing the Grid 2013, the 7th annual report card ranking all 50 US states on net metering and interconnection policies.

The report helps policymakers, regulators, and renewable advocates understand the best approaches to these two wonky but critical influences on the growth of solar energy and small-scale renewables across the country. States are “graded” on an A to F scale depending on their policies – and America’s grades just keep getting better. 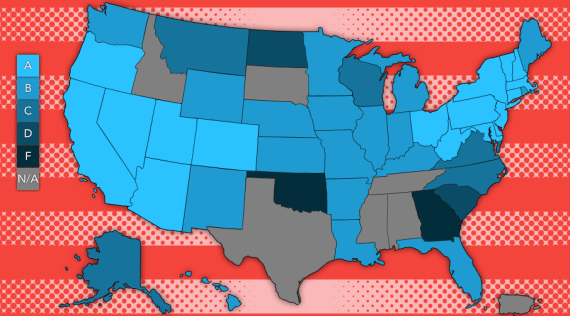 Thanks to plummeting prices, solar power installations are surging across the US, especially among middle class families. But with many state incentive programs set to expire in coming years, progressive net metering and interconnection policies need to be in place in order to sustain the solar boom.

“Renewable resources are now at the scale and cost necessary to allow them to be a real and growing part of our energy landscape,” said Adam Browning, Vote Solar executive director. ”Now that we’ve built this new energy economy, it’s critical we keep the way clear for Americans to keep going solar with strong net metering and interconnection policies.”

Net metering is the more controversial and thus better-known policy. At its most basic, net metering means homes or businesses who have installed their own solar systems are paid in full for the electricity they generate but don’t consume and put back onto the grid. Net metering threatens many existing utility business models and has led to high-visibility fights in states like Arizona, California, and Colorado.

By comparison, interconnection is the more boring of the two, often not even registering a blip on most people’s radar screens. However, it may be the more important policy for the future of solar energy. Interconnection procedures are the rules a solar system must follow in order to “plug” into the grid, meaning net metering may not even come into play until solar panels can interconnect.

But enough with the wonky background – let’s get to the good news. More than two-thirds of US states now receive an A or B grade on net metering, with zero states getting a worse grade in 2013 than in 2012. In order to get an A or B, customers must receive full retail value for electricity contributed to the grid, and the state must maintain several other pro-solar policies.

The results for interconnection are a bit less impressive – while half of US states received an A or B grade, the rest are in need of significant improvement. In order to get an A or B, states must maintain good interconnection rules that incorporate best practices, with few or no customers blocked from interconnecting their systems.

Many states should be commended for having good policies in place, but four in particular, aka the “head of the class” states, lead the nation. California, Massachusetts, Oregon, and Utah (surprisingly) received top grades in both net metering and interconnection policy. California, the epicenter of America’s clean tech market, and Massachusetts, home to one of the country’s fastest-growing green economies, aren’t a surprise, but Utah and Oregon seem primed for solar growth.

Freeing the Grid also recognized Washington as its “most improved” state, with a big jump from a D to a B in interconnection procedures by removing unnecessary requirements and procedures for smaller systems and expediting review of larger systems.

America is just now starting its transition to a clean economy. Renewables, and solar energy in particular, are becoming a real part of a distributed generation power system that moves toward grid freedom away from a traditional infrastructure of centralized fossil fuel generation and hundreds of miles of inefficient transmission lines. With nearly 20 best practices listed for states to emulate, the path forward is clear.

“Policy design on the frontiers of our fast-changing clean energy marketplace can be a challenge to get right,” said Jane Weissman, IREC president and CEO. “Freeing the Grid helps policymakers and other stakeholders make better sense of best practices and what needs to be done in their own state to clear the way for a 21st century approach to energy.”

4 States Lead US In Freeing The Grid For Distributed Solar Energy was originally published on: CleanTechnica. To read more from CleanTechnica, join over 30,000 other subscribers: RSS | Facebook | Twitter.