Draft law on the fast track

On 14 September 2020, the German Ministry for Economic Affairs (BMWi) started the official hearing and public feedback process on the draft law . The 164-page draft law can be found here.

However, the associations and the federal states only had time until Thursday, September 17 to submit their comments, as the Federal Cabinet was supposed to have dealt with the draft EEG on September 23.

Some parts of the draft have already been sharply criticized by the associations. Besides that a number of improvements to the EEG 2021 have been demanded (source: PV Magazine).

The following has been criticised in detail:

The fundamental changes in the EEG

In the new EEG, the goal is now to anchor that the entire electricity consumption in Germany before the year 2050 is to be greenhouse gas neutral. At the same time, the implementation of the climate protection program 2030 is to be partly achieved by the new EEG amendment.

In particular, the increase in the target quantities for renewable energies should be in line with the target of 65 per cent renewable electricity. By 2030, 8.4 GW of biomass, 20 GW of offshore wind, 71 GW of onshpre wind and 100 GW of photovoltaics should be installed in Germany. The maximum values for tenders for onshore wind and PV will be lowered. In addition, an expansion of the area along the edges of freeways for solar plants (source: Erneuerbare Energien) should lead to greater competition and thus lower tender prices.

In order to increase the acceptance for the expansion of renewable energies, financial participations for municipalities with new wind turbine sites and the framework conditions for tenant electricity concepts will be improved.

“Southern quotas” will be introduced in the tenders. The reason for that is to better manage the expansion of onshore wind on a regional basis and to enable better integration into the electricity system. Subsequently, they are intended to relieve the grid bottleneck in the middle of Germany.

According to the draft, the remuneration for new plants should now also be abolished from the first negative electricity price interval of 15 minutes. The six-hour rule in the current paragraph 51 will thus be tightened. Also for the post-financial support era from 2021 onwards, the Federal Government would like to examine in regular reports how the expansion volumes can be realised in a market-driven way.

By 2027 at the latest, the federal government should then present a proposal for a switch from financial support to market-driven expansion. At the same time, so-called “phased-out” plants whose remuneration period expires in 2021 can still provide electricity directly to the grid operator until the end of 2027 (source: Energiezukunft). 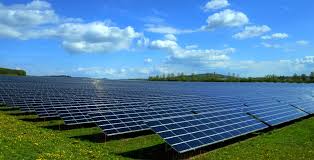 For PV facilities that will fall out of the financial remuneration of the EEG from 2021, plant operators should be able to make all electricity available to the grid operator. For this purpose, operators will receive the market value minus the marketing costs of 0.4 ct/kWh.

However, this regulation only applies to plants up to 100 kW and no own consumption of the electricity is allowed.

The EEG amendment introduces a new tender category. Roof systems that are larger than 500 kW must be put out to tender separately. Until 2025, the limit will be lowered to 100 kW. For these tenders, a maximum value of 9 ct/kWh is under discussion in 2021.

The electricity generated in these systems may also not be used for own consumption. A total of 5.3 GW of capacity is to be put out to through this new tender segment by 2028. The permissible size of a bid in the tenders for ground-mounted PV plants will be increased from 10 to 20 MW, while the tender volumes will be increased. The total volume to be tendered for PV from 2021 to 2028 is 18.8 GW. Figure 1 shows the volumes to be tendered and the expected addition outside the tenders from 2021 to 2028. 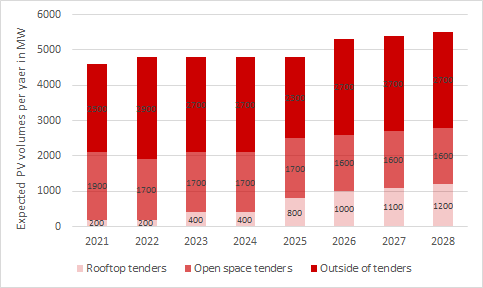 The maximum value for tenders for ground-mounted solar systems will be lowered to 5.9 ct/kWh and, from January 1, 2022, will be determined as the average of the previous three bidding dates plus a margin of 8 per cent.

Wind energy on land to pick up speed again 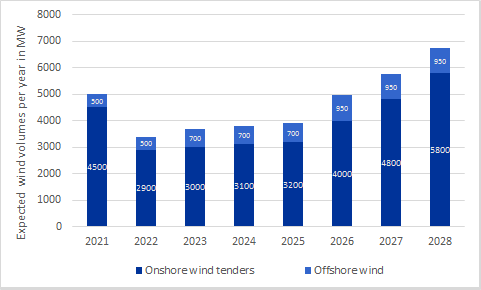 The maximum value in the tenders will be reduced to 6.2 ct/kWh in 2021 and then fall by 2 percent annually.

In order for municipalities to participate financially in wind energy plants, plant operators are to pay 0.2 ct/kWh to the local municipality. For an example plant of 3 MW and an annual full load hour number of 3500, the municipality in question would receive 21000 EUR per year.

What is missing in the amendment?

Many associations and companies criticize the still too low tender volumes to actually reach the 65 percent target in 2030. Greenpeace Energy considers 7 GW of wind and 7 GW of PV capacity to be necessary annually (source: Solarify).

The German Renewable Energy Federation estimates that 4.7 GW of onshore wind, 2 GW of offshore wind and 10 GW of PV capacity will be needed (source: Energiezukunft).

According to statements, the tenders for roof systems would slow down the expansion, as the volume of this new tender is much smaller than the expansion in this market segment has been in 2019 (source: PV Magazine). At the same time, the politicians should strengthen own consumption cases in order to increase the acceptance by citizens.

The current draft of the EEG amendment 2021 also completely fails to implement the EU Renewable Energies Directive, which provides for the abolition of levies and surcharges on own consumption from systems up to 30 kilowatts (source: PV Magazine).

It remains to be seen whether and which changes will still find their way into the legislative process and to what extent policy-making will accommodate the justified criticism.

Has there been any talk about bolstering high speed, high efficiency transmission as well? Given the difference in available renewable resources by region, I thought I've read that Germany decarbonization goals would greatly benefit from HVDC or similar technologies

there has been quite some talk about increasing the speed of the grid expansion. But it is difficult, as Germany is densely populated and permit and building takes many years.

But here is an interactive map of the current projects.
https://www.netzausbau.de/leitungsvorhaben/de.html?cms_map=4

Currently, it rather looks like those large north-south connections will be available only after 2022.

Really useful information, Simon-- thanks for sharing. Definitely see where high density would lead to more challenges, but I would think it also would speak to the high value of such completed projects since there are more areas of dense power needs than rural low-density spots