As 2014 Has Come to a Close, Nuclear Energy is at a Crossroads - Again!

The world needs nuclear power – so says the latest edition of the World Energy Outlook (WEO) issued in November:

“Nuclear power is one of the few options available at scale to reduce carbon-dioxide emissions while providing or displacing other forms of baseload generation. It has avoided the release of an estimated 56 gigatonnes of CO2 since 1971, or almost two years of total global emissions at current rates.”

Yet looking back at 2014, the industry has had its ups and downs. There were setbacks as France formalized its intention to reduce its reliance on nuclear going forward, Sweden pulled back after its most recent election, and in Finland the Olkiluoto 3 project was delayed once again. In the US, the most recent plant to be shutdown is the Vermont Yankee plant; shutdown after 42 years of operation as not being economic, yet its shutdown will definitely raise electricity costs for its consumers and impact the local economy as a result of its closure-related job losses.

There was good news in Japan as the first units were approved for restart since the 2011 Fukushima accident, although the actual restarts are taking longer than expected. The re-election of the Abe government also bodes well for Japan’s nuclear future. In the UK, there was a big win as Europe approved the project at Hinkley Point as not contravening state-aid rules; but once again progress is slower than most would like.

And then there are places where nuclear power is booming. China brought new units into operations and approved numerous new units with a larger-than-life target for its nuclear share in 2020 and beyond. The Chinese also approved its first Hualong One reactor, the evolution and combining of designs from both CGNPC and CNNC, as they plan for future exports. Korea approved new units and its first new site in decades. Russia continues to grow both domestically and continues to be very aggressive in the export market.

Given the importance of nuclear power, it is the first time since 2006 the WEO includes a special chapter on nuclear – in fact this time 3 full chapters performing a detailed in-depth analysis of the nuclear option. It clearly demonstrates the benefits of nuclear power in addition to being one of the only generation options at scale available to reduce carbon emissions; it also plays an important role as a reliable source of baseload electricity that enhances energy security. Clearly the benefits and the need for more nuclear is becoming clearer than ever. So why is there this continuing imbalance as we look around the world at various counties’ policies for nuclear power?

The WEO notes two significant issues holding back a large-scale nuclear renaissance. These are public concern and economics. Both are valid and need to be better addressed by the industry. We have written much over the past year or so on the importance of improving public attitudes and, in fact, in many countries we now see improvement. But we also acknowledge there is a long way to go to reduce public fear about nuclear power. For example, even though the main objective of Germany’s Energiewende is to reduce carbon emissions, their even stronger emotional response against nuclear is causing a short term increase in carbon emissions — i.e. their fear of nuclear appears to be stronger than their desire for a cleaner environment.

On the cost side, concerns about high capital costs and completing projects to cost and schedule are valid. The industry has more work to do on this issue as evidenced by some recent projects. At the same time we see that countries such as Korea and China, who are building series of plants in sequence and are achieving the benefits of replication and standardization resulting in lower costs and improved certainty, are completing projects to cost and schedule. Yes, it can be done. But even these countries are not immune to public concerns.

The real problem is that these concerns tend to overwhelm the discussion even amongst energy professionals. For example the summary in Chapter 12 of the WEO, “The Implications of Nuclear Power”, starts “Provided waste disposal and safety issues can be satisfactorily addressed, nuclear power’s limited exposure to disruptions in international fuel markets and its role as a reliable source of baseload electricity can enhance energy security….. “. Renewables are always addressed with hope and little concern for their very real issues while discussions about nuclear are most often focused on its challenges.

Yet even at Google, engineers have come to a conclusion that the challenges to achieving climate goals with renewables alone are very large. Two Google engineers assigned by the company to show how renewable energy can tackle climate change each came to a blunt conclusion:

The following figure sums it up very clearly. In the case that doom and gloom overwhelms good policy and decision making, we may end up with the Low Nuclear Scenario. But this scenario has real implications. According to the IEA:

“[T]aken at the global level, a substantial shift away from nuclear power, as depicted in the Low Nuclear Case, has adverse implications for energy security, and economic and climate trends, with more severe consequences for import-dependent countries that had been planning to rely relatively heavily on nuclear power.”

Of more importance, at the other end of the spectrum is the 450 Scenario which the IEA believes we need to achieve to truly have an impact on climate change. And in this case, even more nuclear power than the so called “High Nuclear Case” Is needed. 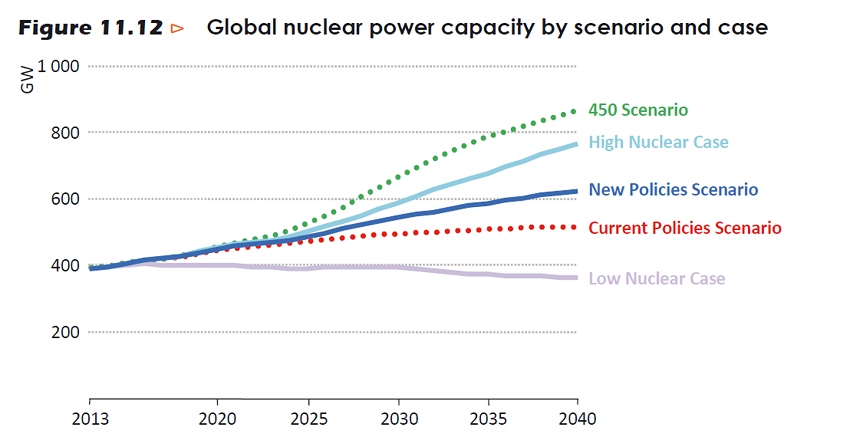 So there it is: the best strategy to economically and efficiently address climate change includes a substantial contribution from nuclear power.

This year’s WEO lays out the challenge very clearly, and once gain nuclear power is at a crossroads. The options range from a slow decline to a more than doubling of nuclear power in the next 25 years (see figure above).

Nuclear power must be an important part of any future low carbon energy system but there are beliefs that are very well entrenched in the minds of both the public and even many global energy professionals that must be addressed once and for all. It is our responsibility to take on these challenges for a brighter future. It’s time to go big and work together to build a strong base of global support for nuclear power. Beliefs are hard to change, but change them we must if we are to have a sustainable, abundant and economic energy future for us all.

And as 2014 comes to a close, I want to thank all of you for continuing to read our articles and contribute to the discussion. Wishing you all a very happy, healthy and prosperous 2015!