Virginia Electric and Power Company, a subsidiary of Dominion Virginia Power, won the Department of the Interior’s (DOI) auction to develop 112,800 acres about 23 miles from Virginia Beach with a final bid of $1.6 million.

Wednesday’s auction was the second successful DOI offshore wind lease sale held in a month, after a July 31stauction of 164,750 acres in New England, and could signal the start of a rush to develop new tracts of wind-rich areas off the Atlantic coast.

An Approaching Wave Of Offshore Wind

DOI has targeted expanding renewable energy production on federal lands to 20,000 megawatts (MW) by 2020, and the Virginia Wind Energy Area (WEA) could be a major contributor toward that goal. The WEA has the potential to generate 2,000MW of wind energy – enough to power 700,000 homes. 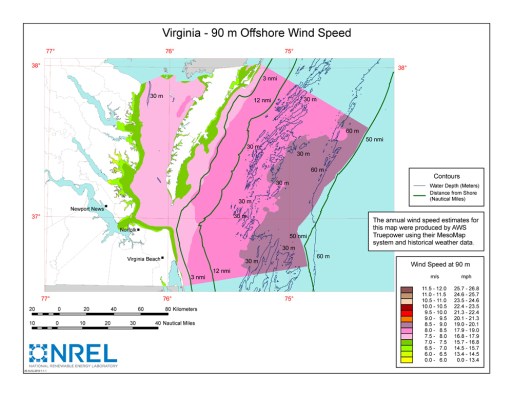 Through its “Smart from the Start” cooperative approach to stakeholder involvement, DOI worked with Virginia’s government and environmental groups to target waters that present the fewest possible development concerns and the best chance for expedited regulatory approval.

As a result, the Virginia WEA avoids environmentally sensitive habitat, military training areas, and commercial shipping routes. “Today’s sale is the result of a great deal of collaboration and planning with the Commonwealth of Virginia,” said DOI Secretary Sally Jewell.

Jewell had previously stated that if the New England and Virginia auctions went well additional competitive lease sales would be held, and new auctions are now expected for areas off the coasts of Maryland, New Jersey, and Massachusetts over the next year. Even though only two of the eight qualified bidders took part in the auction, the auction took six rounds of bidding between Dominion and Apex Virginia Offshore Wind, making it a “robust sale” according to Bureau of Ocean Energy Management (BOEM) Director Tommy Beaudreau.

But even though Dominion won the rights to develop the Virginia WEA, actual development could take years to start. The lease comes with a preliminary six-month term to develop and submit a site assessment plan detailing test activities Dominion will take to assess the wind resources and ocean conditions to BOEM for approval.

If approved, Dominion will then have up to four and a half years to submit a construction and operations plan for approval. Once the second plan is approved, the company will then have an operation term of 33 years over the leased area. Dominion will pay $338,000 in annual rent for the WEA until turbines are operational, and operating fees for all generation once electricity is produced at the site.

However, the auction results renewed concerns about Dominion’s actual intent to build turbines. Local environmentalists worried the utility would “drag its feet” to develop the lease when the auction was announced, and they reiterated those concerns today.

Costs seem to be the biggest threat to Dominion’s development. The company has already begun testing offshore wind turbines through a Department of Energy grant, indicting genuine interest if they can be operated efficiently. ”Right now, it is expensive to do,” said Jim Norvelle of Dominion in an interview with The Huffington Post. “That’s why we’re involved – we think it could be beneficial to customers if the price is right.”

Full Speed Ahead For Federal Renewables

Regardless of how fast, or even if Dominion develops its lease, the overall message is clear: Even though zero utility-scale turbines are currently spinning off US shores, DOI is moving as fast as it can to tap the renewable energy potential of our federal lands, and developers are plunking down serious cash for the right to help move America toward a clean-energy future.