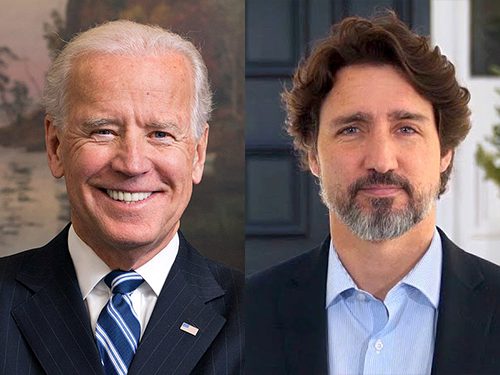 Accelerating climate ambition and building back better are two of the six components of a new U.S.-Canada partnership roadmap that Prime Minister Justin Trudeau and President Joe Biden released yesterday, during the first official summit between the two leaders and their senior cabinet officials.

The roadmap includes a commitment to convene a High-Level Climate Ministerial “to align our policies and our goals to increase ambition to tackle the climate crisis,” states a White House fact sheet released just ahead of the virtual summit. It adds that the two leaders “will commit to strengthened implementation of the Paris Agreement by working jointly and with others to increase the scale and speed of action toward the goal of net-zero emissions by 2050.”

The advance fact sheet struck a tone of normalcy that was strikingly absent during the Trump years, noting that trade between the two countries totals nearly US$2 billion per day, and “our people-to-people ties in education, small business, the arts, and culture are unparalleled.”

By all appearances, that tone carried through the late afternoon session.

“The president and I discussed the ambitious new partnership roadmap, based on shared values and priorities, that will guide our countries’ work together over the coming years,” Trudeau said after he emerged from the summit. “In the face of COVID-19, of climate change, of rising inequality, this is our moment to act. So we’re not wasting any time in getting down to work. Job one remains keeping people safe and ending this pandemic.”

Biden “stressed the importance of tackling the pandemic but also spoke about working with Canada to influence other countries to step up their game on global challenges such as climate change,” CBC writes.

“We also doubled down on our efforts to tackle climate change. It was really, really encouraging,” the U.S. president said. “Now that the United States is back in the Paris Agreement, we intend to demonstrate our leadership in order to spur other countries to raise their own ambitions,” and “Canada and United States are going to work in lockstep to display the seriousness of our commitment.”

For his part, “it took Justin Trudeau about one minute to tell Joe Biden at their first summit meeting that the new president was a big improvement over Donald Trump,” veteran national columnist Susan Delacourt writes for the Toronto Star.

“There’s a lot to rebuild,” the PM said, as he thanked Biden for stepping up on climate change. “U.S. leadership has been sorely missed over the past years.”

One measure of that change is that the joint communiqué from a bilateral meeting is now so much easier to work on, Trudeau added. “It’s nice when the Americans are not pulling out all references to climate change and instead, having them in.”

And indeed, the final communiqué issued jointly by the Prime Minister’s Office and the White House included detailed action items for each of the six elements of the roadmap. The 12-point section on accelerating climate ambition:

• Explicitly links the two countries’ 2050 net-zero commitment to the 1.5°C target in the Paris Agreement;

• Reiterates Biden’s promise to release his country’s new Nationally Determined Contribution (NDC) under the Paris deal in advance of the climate leaders’ summit he plans to convene on Earth Day April 22;

• Expresses Biden’s commitment to hold polluters “accountable for their actions”, and the two leaders’ mutual agreement “to work together to protect businesses, workers, and communities in both countries from unfair trade by countries failing to take strong climate action”;

• Commits both countries to reduce methane emissions from oil and gas production to “protect public health and the environment, as guided by the best science”;

• Pledges a “coordinated approach to accelerating progress towards sustainable, resilient, and clean energy infrastructure, including encouraging the development of cross-border clean electricity transmission”;

• Calls for “aligned and accelerated policy actions, including efforts to achieve a zero-emissions vehicle future”, reflecting the “integrated nature of the road transport, maritime, and aviation sectors” in the two countries;

• Commits the two leaders to “work with Canadian and American public and private financial institutions to advance the adoption of climate-related financial risk disclosure and align financial flows with climate goals, including the achievement of a prosperous net-zero emissions economy”;

• Recognizes the ecological importance of the Arctic National Wildlife Refuge, the calving grounds of the Porcupine caribou herd, and the importance of the herd “to the Gwich’in and Inuvialuit peoples’ culture and subsistence”;

The section of the communiqué on building back better stresses a “sustainable and inclusive economic recovery” and the “opportunity for green growth”, while pointing to the “disproportionate impacts” of the pandemic on women, youth, under-represented groups, and Indigenous peoples. It commits to support women’s “full and equal participation in the work force”, notes the impact of the pandemic on small businesses, launches a bilateral supply chain security plan, commits to a joint critical minerals action plan to support a “net-zero industrial transformation”, and stresses the reliability and security of North American energy infrastructure, all while “maintaining high standards of public health, safety, labour, and environmental protection”.

One item that didn’t make it into the communiqué or the roadmap was Biden’s Day One decision to cancel the Keystone XL pipeline, as he’d promised to do on the campaign trail. White House Press Secretary Jen Psaki said Trudeau had previously raised the matter with Biden, Global News reported ahead of the summit, “and he’s of course welcome to today.” But “the president has made clear that this is a commitment that he has made in the past, that it’s not in the interest of the United States, and that we want to try to address our climate crisis while also creating good paying, union jobs.”

After the meeting, Global writes, Trudeau said he and Biden are on “the same page when it comes to standing up for the middle class and people working hard to join it.” He told media they’d talked about “leveraging supply chains and support for businesses to create good, well-paying jobs and help people who have been hit hardest get back on their feet.”