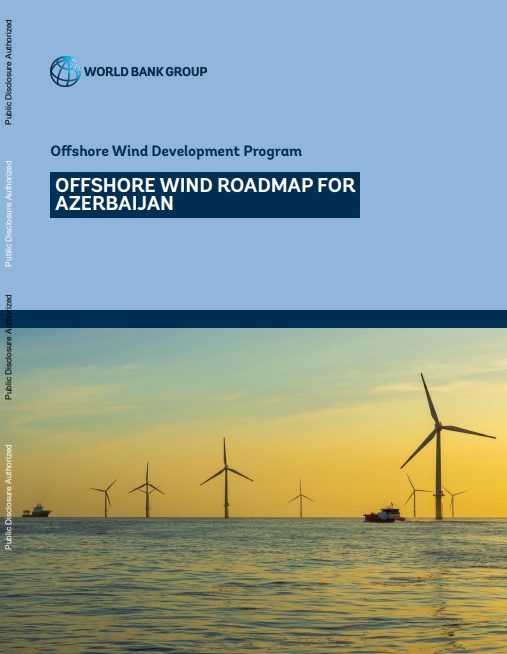 Exploitation of this OSW potential offers an opportunity for Azerbaijan on several fronts: ■ Decarbonization. Azerbaijan’s electricity system will need to evolve over the long-term to a decarbonized energy system covering electricity, transport, industry, and heating. Such a system will need to be founded on large-scale electricity from renewables such as OSW and, decreasingly over time, natural gas. Hydrogen may also play a role as an energy vector and storage for some aspects of transport and industrial heat.

■ Export potential. If developed at scale, offshore wind offers an opportunity for Azerbaijan to increase its exports of both electricity and natural gas (as more gas is made available for export due to reduced national consumption of gas for domestic electricity production). It may also offer a long-term opportunity for hydrogen export, assuming Azerbaijan can generate green hydrogen at costs that are competitive in a global market.

■ Industrial transition. Offshore wind development is an opportunity for Azerbaijan to transition a significant part of its existing oil and gas workforce over to clean energy. This transition would not only involve direct construction of the wind farms themselves but also development of associated infrastructure (e.g., ports and vessels) and manufacturing (e.g., towers and foundations). Diversifying this workforce will help ensure that skilled, long-term jobs are retained. XII Offshore Wind Roadmap for Azerbaijan

■ Large scale competitively priced power. While the first OSW projects in Azerbaijan will likely have a higher levelized cost of energy (LCOE) than current generation, this cost gap may be driven down over time through ambitious targets. Based on experience in other countries, it is estimated that Azerbaijan will be able to narrow this gap to a point where OSW achieves cost parity, provided the right strategy and market competition.

AZERBAIJAN’S OFFSHORE WIND POTENTIAL The World Bank has previously assessed Azerbaijan’s OSW technical resource at 35 GW in shallow waters (for fixed foundations) and 122 GW in deep waters (for floating foundations),i excluding environmental and social considerations. Analysis for this roadmap has built on the previous resource assessment and uses high-level assessments of biodiversity, social, and technical constraints to eliminate less desirable areas and focus on the most favorable offshore wind zones (see Figure ES.1). This has reduced the amount of resource potential from the original estimate; however, the potential development zones still provide a resource potential that is many times larger than the country’s energy demand. For example, Figure ES.1 shows that Azerbaijan could develop all of the OSW capacity proposed in this roadmap (in seven blocks of 1 GW each) using fixed foundation projects in shallow waters between 10 and 40 meters relatively close to shore. The analysis in this roadmap suggests that the lowest LCOEs will be in areas north of the Absheron peninsula.