French expat based in Indonesia since 2006. Involved with a family-run wood business with 20+ years experience, currently looking for partners/clients for the balsa wood it produces in Indonesia.

Wind turbine makers are finding it increasingly difficult to get parts they need to build their machines, snarling progress on a global shift toward renewables at precisely the time scientists say it needs to speed up.

Manufacturers including Vestas Wind Systems A/S and Siemens Gamesa Renewable Energy SA are wrestling with their own factory shutdowns and disruptions to suppliers after lockdowns related to the coronavirus spread worldwide. Delays at major ports, airports and border crossings have snagged deliveries of raw materials including steel and components from turbine blades to ball bearings. That will hamper completion of wind farms this year and next.

It’s also a blow to efforts to slash greenhouse gas emissions close to zero by the middle of the century, a deadline that the International Renewable Energy Agency says requires a rapid deployment of wind and solar technology.

“These delays are important,” said Phil Taylor, professor of energy systems at Newcastle University in northern England. “We need to make great strides in decarbonization as early as possible to keep the total emissions during the transition period as low as possible.”

In order to hit ambitious targets like the European Union’s aim to have net-zero emissions by 2050, wind power must generate some 6,000 gigawatts of electricity -- over 10 times the current level, according to the International Renewable Energy Agency, which is based in Abu Dhabi. It’s that or pray for breakthroughs in so-far impossible-to-scale carbon-capture technology in cloudy places where solar is not an option.

Building wind turbines -- power generation units that range in size from small backyard models to giants as big as New York’s Chrysler building -- rests on a complex network of raw material and component suppliers. Rotor blades, bearings, gearboxes, controls and generators are made up of around 8,000 parts that go into a typical utility-scale wind turbine, according to the U.S. department of energy. Supply chains can often stretch across several continents and include rare earth elements shipped from Asia and high-tech components from Europe.

Lockdowns designed to slow coronavirus as it spreads through the world’s leading industrial powers are rippling through those intricate supply chains, with disruption worsening as the virus hops from country to country, forcing governments to act.

“Every part of the supply chain has been affected,” said John Hensley, vice president of research at the Washington-based American Wind Energy Association. “Supply cuts in Spain, India and China have affected component availability in the U.S. We’re also seeing slower construction and development activity.”

He estimates that delivery delays caused by the virus shutdowns have put up to 25 gigawatts of U.S. wind farm projects at risk. “Major delays could cause economic damage,” Hensley said on a conference call Thursday.

Among a wave of shutdowns: TPI Composites Inc., a U.S. maker of turbine blades, last week said it slashed by 50% production at its plant in Izmir, Turkey. It’s operating with just a skeleton staff in India, and both countries introduced restrictions on the movement of people. Navantia, a Spanish manufacturer of offshore wind components like protective jackets for nacelles and floating bases, said its factories will remain closed until the emergency lifts.

Those disruptions and others like them are hitting the biggest manufacturers. Siemens Gamesa said it’s had to close factories in Spain and India, adding production in the U.S. was disrupted due to a lack of parts. Vestas said its factories in India and Brazil were closed due to parts shortages. That’s starting to hamper maintenance and operation of wind farms, Vattenfall AB wind energy chief Gunnar Groebler told the industry journal Recharge news.

General Electric Co. had some hiccups with its supply chain in China early on and has worked to contain them, said Jérôme Pécresse, CEO of the renewable energy unit.

“We are monitoring closely the Covid-19 situation,” Pécresse said on a March 4 conference call. “We continue the positive recovery of our supply chain in China.”

In China, lockdowns are exacerbating a shortage of ball bearings that help machine-parts move and balsa wood used in turbine blades, according to Leo Wang, analyst at BloombergNEF. Ecuador, exporter of 90% of the world’s balsa wood, on March 15 issued a ban on ships and airplanes landing in its territory as authorities grapple with one of South America’s deadliest Coronavirus outbreaks.

Plunges in the Australian dollar due to the outbreak are raising costs of imported parts, consultancy Rystad Energy said, casting doubt on whether projects will finish this year. The Australian dollar is viewed as a proxy for risk sentiment and China’s economic outlook, both of which are dampened by the crisis.

How Covid-19 is impacting wind and solar 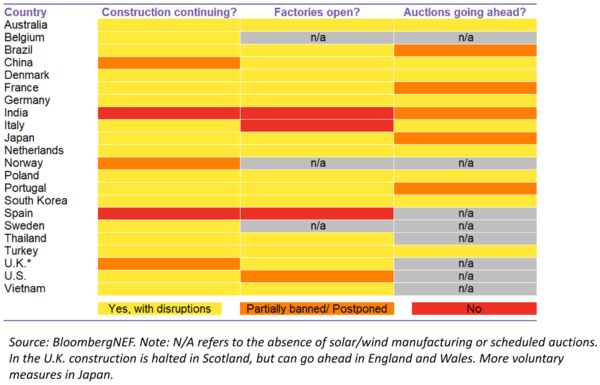 Most wind and solar projects will experience delays even with construction going ahead and factories remaining open in most countries, according to BloombergNEF. While most governments have not mandated the shutdown of construction or factories, other issues present challenges. Labor shortages due to travel restrictions, slowdowns in permit issuance, financing difficulties and other supply chain shortages are stalling projects. In addition, auctions have been postponed in many countries, and the commissioning deadlines of winners from the previous rounds are being extended. On the operations side, restrictions on travel make it hard to get teams on site.

In Japan, developers have had difficulties holding meetings to explain their projects to local residents, which may delay the process of getting local approvals, according to the Japan Wind Power Association.

Firms are fighting to keep production moving. Belgian dredging firm DEME -- which clears debris from the sea bed to make way for turbine bases -- will pre-quarantine staff on a hotel boat for two weeks before deploying them to projects, a move designed to avoid costly shutdowns if the virus spreads among workers. Others are re-organizing supply lines and production floors to increase social distancing, but warn the measures entail of delays.

Wind industry executives hope they can make up some of the shortfall next year when restrictions lift and are calling for governments to lighten tax and regulatory burdens to help the process. The Scottish government has extended planning permission for wind projects by six months to help developers cope with delays.

But the moves won’t be enough to slow wind construction in 2020. BloombergNEF, which had anticipated installations would grow 24% this year, now expect a more moderate 9% expansion.

“It will not be possible to make up the lost ground in wind energy installations in 2021,” a spokesman for Wind Europe said.

I guess silver lining is it's good to see the demand is still so strong-- but do you think this will do any sort of long-term damage to the uptick in wind energy, or will it end up more as a blip on the radar?

This hiccup is too bad, but it's just that: a hiccup. Like Matt points out, demand is obviously there and a short slow down won't change people's minds about wind. Also, with regards to net carbon release, I assume the COVID shutdowns have cut emissions enough to make up for slower wind production, right?