Rebecca is a power market analyst producing market intelligence for participants in the Mid-Continent ISO. She has experience working with utilities, municipalities, and non-profits to integrate...

As total U.S. installed wind capacity approaches 100 gigawatts (GW), more than 40 percent remains concentrated in midwestern states. Significant levels of wind generation impact operations in both the Mid-continent Independent System Operator (MISO) and the Southwest Power Pool (SPP), the two competitive electricity markets that make up the region. In April 2019, SPP even set the record for wind penetration, with 66.5 percent of power in the region supplied by wind. As installed wind capacity continues to climb, both markets expect to see more wind generation come online in the next few years. As a result, asset owners in the midwestern electricity markets must maintain awareness of the impact new wind builds can have on both the marginal energy cost of power at their generators and the congestion on surrounding transmission lines.

Congestion, defined as a situation in which power flow is limited across a power line due to insufficient transmission capacity, grew more frequent with the rise in wind capacity. Congestion over a particular line results in a constraint, in which generators on the source side receive lower costs in order to incentivize them to produce less power, while generators downstream of a constraint are priced up to encourage increased production. In 2018, 32 of the 50 most impactful transmission constraints in MISO and SPP were driven by regional wind strength. Many of these constraints were driven by power from wind farms in the sparsely-populated western portions of the region flowing east to more densely-populated load centers. These flow patterns often result in congestion that affects the price of generators in multiple energy markets across the Eastern Interconnect, requiring owners of wind farms and thermal units alike to remain aware of trends in neighboring markets. 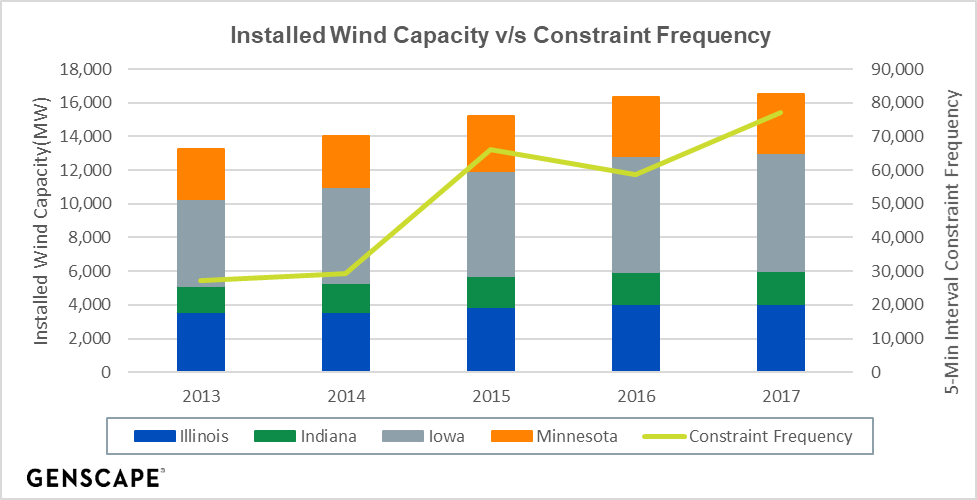 Many power producers are positioned on the source side of common constraints on windy days as wind power threatens to overload surrounding transmission lines, lowering the cost of each megawatt of energy sold by that generator. The figure below illustrates the increasingly negative marginal congestion costs at a coal unit in Iowa located nearby several wind farms. As growing wind capacity drives stronger, more frequent congestion, the price for power at this unit becomes increasingly unfavorable. 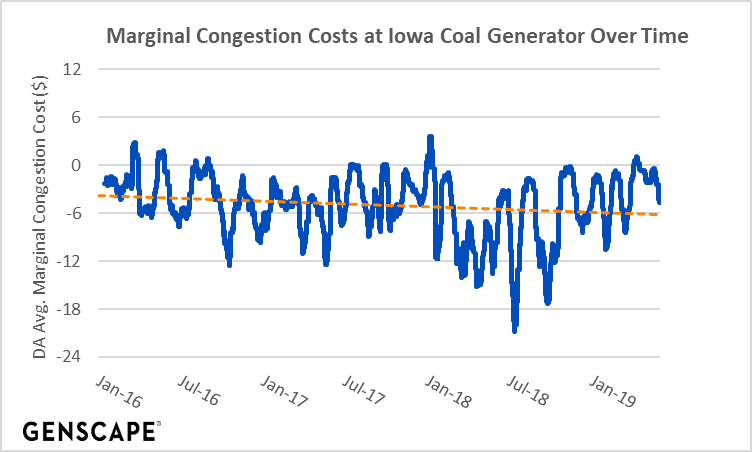 Transmission upgrades in the first half of 2019 mitigated some of the more extreme congestion impacts from growing wind production in the Midwest. In MISO specifically, new or upgraded transmission lines significantly reduced risk for 13 of last year’s most impactful constraints. This year, both markets saw reductions in congestion intensity as the transmission system adapted to the changing generation landscape. While infrastructure upgrades improve the efficiency of both markets in their current state, wind capacity continues to grow by several gigawatts per year in the region, promising new congestion risks for units in MISO and SPP. This pattern of transmission upgrades chasing wind builds is an ongoing saga in both markets.

By mid-2020, MISO expects to install another 3.7GW of wind generation. Illinois in particular, will see more than 1GW of new wind generation in the next year. Newly-constructed wind farms, like Broadlands and Green River are expected to push power east toward Indiana, aggravating congestion on the 345kV system between the two states.

Just like its eastern neighbor, SPP is adding wind farms at a record pace. A new wind farm of nearly 200 MW, Prairie Queen, is expected to initiate commercial operation after this year in eastern Kansas. This new injection of power in eastern Kansas will likely aggravate west-east power flow between the SPP and MISO, including one of SPP's most common constraints, Neosho - Riverton. Power market analysts on Genscape’s SPP desk expect the new wind farm to significantly increase the frequency and magnitude of congestion along this pathway, agitating an already highly congested area.

With wind capacity continuing to climb in the Midwest, energy market participants are increasingly exposed to energy price fluctuation from dynamic power flow patterns that result from a changing generation landscape. As renewable penetration continues to grow, there is ample opportunity to benefit from or hedge against wind-driven congestion in both MISO and SPP through understanding of the power flow and economic impacts of new wind developments in the Midwest.

Rebecca, who could have imagined unpredictable weather might impact reliability, and make "free" energy from the sun and wind even more expensive?!

Bob, America is a big country, there is almost always wind blowing or sun shining somewhere in America, let alone the other Renewable energy Sources. - The Nuclear experiment is basically over, - just too expensive, so it is incumbent on us to make the new technologies work better, rather than harp on what has gone, imho.

Thanks Geoff, when my lights go out later this summer because the sun is setting and gas can't get to my local gas plant quickly enough, I'll remember there is almost always wind blowing or sun shining somewhere in America, and take comfort from that.

And when Vogtle Units 3 & 4 go live in 2021, and are generating more clean electricity than all solar panels and wind turbines east of the Mississippi combined, day or night, windy or calm - I'll try to believe the nuclear experiment is basically over.

I'm all for keeping the existing nuclear fleet open and researching new developments in nuclear (SMRs and others), but I don't know that Vogtle is great to use as a shining example given the cost overruns and consistent schedule delays-- because of the money already sunk into it I'm certainly hoping they'll be online by 2021, but I'm not betting the house on them hitting any deadlines the way the project's gone