Wind energy development: Overview about the most successful companies in Germany in 2018

Analyst of companies who are spezialised in renewables (special wind energy) Research, analysis and evaluation of wind energy in France, USA, Germany and Sweden (more to come) 2014: Preparation...

In 2018, a total of almost 2,800 MW of onshore wind was connected to the grid in Germany. These installations were distributed among over 130 researched planning companies. It should be noted that there was a total of just under 10% unassignable megawatts due to the data, so there are certainly more than the 130 companies that have brought in 2018 wind turbines on the grid.

These companies are divided into the following areas:

In terms of leading companies, Enercon is the leader of German installed win with over 50% of installations coming from then. This total is an increase of 12% over the previous year, even though 2018 installations were only half of the 2017 record of 5,300 MW onshore was. Subsequently, the world market leader Vestas came second with 27%, which was able to expand its share slightly. Nordex achieved third place with 8%, but lost almost 6% to the previous year. This landed them just ahead of Senvion, which brought only 20 megawatts less to the German areas and also lost 3%. Siemens Gamesa achieved with 4.5% above the previous year's result, ahead of ENO with its market share expanding from 1.4% in 2017. With that, ENO came just ahead of GE, who was the big loser of the year and lost 7% market share. Amperax, a small manufacturer from Germany, reached 6 megawatts and EWT, a Dutch manufacturer, set up a plant for 750 kilowatts.

The thirty most successful planners are shown in the following diagram: 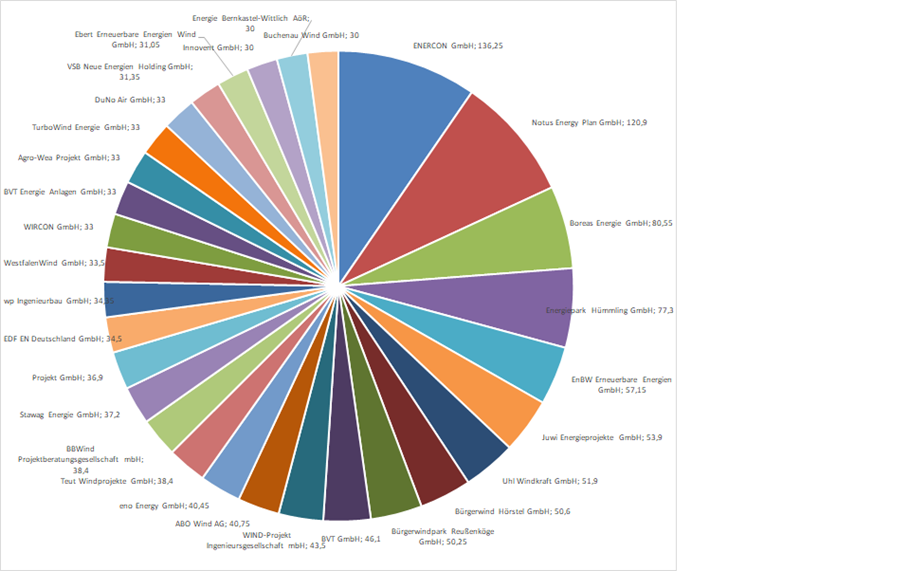 It is striking that the manufacturer Enercon has landed with its project planning activities in the first place and most likely has projected even more, since there are no reliable official data sources except for the publicly available official journals and newspaper reports. Though it’s a striking result for 2018, the three of the largest companies from the field of project planning, WPD, Enertrag and UKA, have built very little in this year.