VIDEO STORY – Take a tour of Raymond Cardinal’s solar-powered cabin out in the wilds of the Peace-Athabasca Delta.

Solar is revolutionizing cabin life for Indigenous residents in the remote wilderness of northern Alberta.

This week, we meet up with Raymond Cardinal of the Athabasca Chipewyan First Nation (ACFN) at his cabin in the wilds of the Peace-Athabasca Delta near Fort Chipewyan, Alberta.

Fort Chipewyan is a fly-in Indigenous community of 1,000 people. After flying into the Fort Chipewyan, Ross Campbell—another Fort Chip resident—takes us on a choppy, hour-and-a-half ride across Lake Athabasca through a complex system of creeks, ponds, and wetlands to Big Point, one of the few pieces of high ground in this world-class inland delta.

Just as we land at a make-shift dock, Cardinal arrives, also by boat. He’s brought with him a wood stove for his cabin, which he’d had repaired in town. We loaded the stove into Cardinal’s mini Suzuki truck (more like a truck-shaped quad with fat off-road tires) and he takes us a few kilometers down-trail to his cabin. 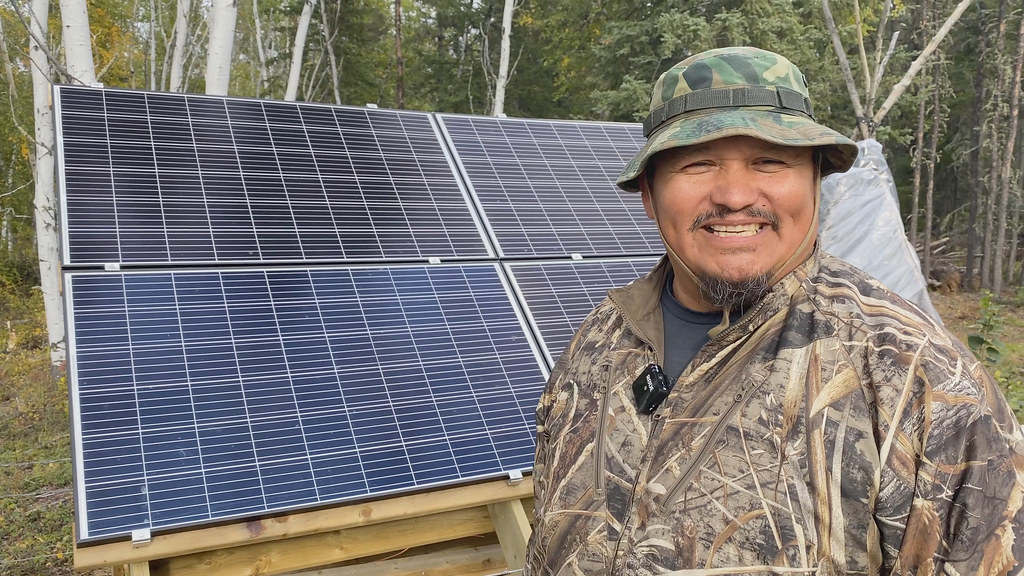 Cardinal’s cabin is located on the ancestral grounds of his family, on the high ground overlooking the Peace-Athabasca Delta. He welcomes us to the Athabasca Chipewyan traditional territories and gives us a tour of what he affectionately calls his “homestead.”

The setting is beautiful: a meadow flanked by a striking stand of white-barked Aspen and an expansive view of the Peace-Athabasca Delta.

The bugs are only mildly annoying.

Cardinal takes us on a tour of his cabin, warehouse, and outdoor shower. (You can watch the tour yourself in the video at the top of this article.)

After the tour, Cardinal gestures to the edge of the meadow, where the landscape spills out to the horizon.

“If you look around, we have the boreal forest. It’s a home to the Dene people, and we’ve been in these territories for thousands of years,” says Cardinal. 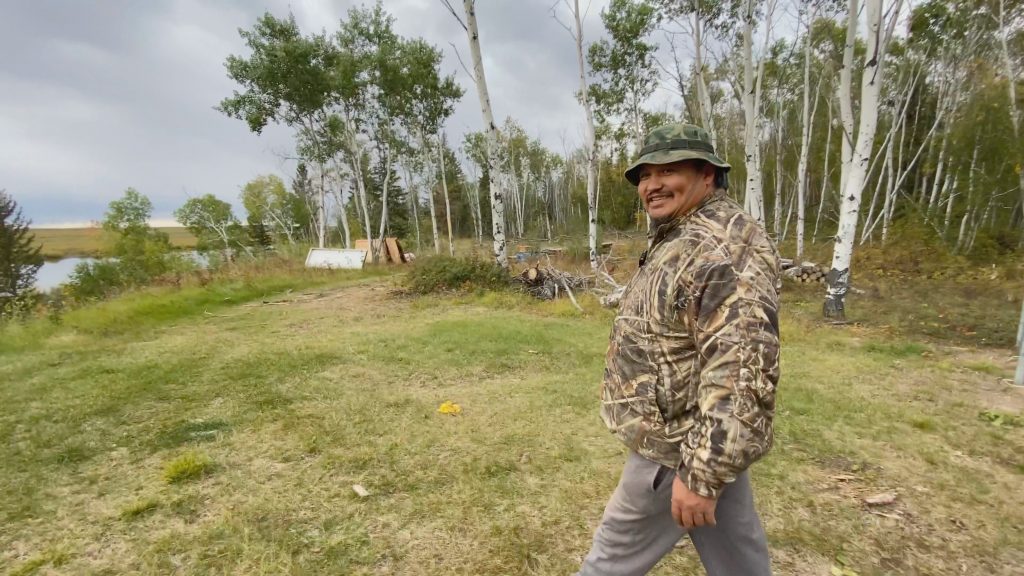 Raymond Cardinal at his solar-powered cabin at Big Point out on the Peace-Athabasca Delta. Photo David Dodge, GreenEnergyFutures.ca

One thing I notice about Cardinal is his subtle, wry sense of humour. “This is my scenery, actually,” he says with a slight smile. “This is a creek that we use, not sure the name of the creek, but if you have a look … south … that’s all our traditional territories,” says Cardinal. Then he points west and explains Fort Chipewyan is on the horizon and Lake

Athabasca is to the north.

“I built here because my grandmother had her homestead here before she moved to Fort Chipewyan back in early 1900s.”

Cardinal plans to keep his family connected to this place. He has a 17-year-old son whom he is teaching to carry on the traditions of hunting and picking traditional medicines. “One day,” says Cardinal, “he will take over and it’ll be his spot.”

But Cardinal’s cabin just got something his grandmother never had: solar-powered electricity.

It all started with Three Nations Energy, a company owned equally by the ACFN, the Mikisew Cree First Nation, and the Fort Chipewyan Metis Association, that just launched a 2.2-megawatt solar project to offset 25 per cent of the diesel-generated electricity in Fort Chipewyan.

This got people thinking about exchanging their diesel generators for solar at their remote cabins, too.

A former councillor with the ACFN, Cardinal says his Nation worked with Rob Macintosh and Clayton Stafford from Greenplanet Energy Analytics on a solar pilot project: custom designing solar systems for the community’s remote cabins.

In all about 20 members of the ACFN, Mikisew Crew and Metis Association of Fort Chipewyan are getting off-grid solar systems.

Randal Perras of Greenplanet Energy Analytics—joined us on our trip to Cardinal’s cabin to give us a quick tour of the solar system.

Perras, who installed the system, explains that this specially designed system consists of a wooden rack that has two tilt angles—one for winter, the other summer. Four 300-watt solar modules are mounted in an insulated box on the rack.

Perras says these batteries store enough energy to run the lights and fridge for two or three days.

The big news for Cardinal, though, is that he gets to save gas and eliminate the constant drone of a generator that can really kill the mood in the wilderness.

“Hauling gas is a is the biggest challenge because we have to transport it here.”  To get gas to Cardinals cabin it is hauled into the north over a winter road which is only open to big tankers for about one month per year. Then it must be transported across Lake Athabasca to his remote cabin.

Cardinal says he pays about $1.60 per liter of gas. To power his cabin in the past he would run one of the generators and burn through about 20 liters in 24 hours; that’s about $30 per day back in his pocket thanks to his new solar units.

He’s keeping the generators around as backup and for running tools. Sure saving money is great and reducing emissions is good, but the thing Raymond and other cabin owners like the most is the silence of solar.

“And my wife loves that.”

So is solar pretty cool? “It’s awesome. I love it.”

David Dodge is the producer and Kay Rollans is the editor of of GreenEnergyFutures.ca. This blog, video and CKUA Radio podcast originally appeared there.

It's so impactful when you can see the people these types of projects can directly benefit and their excitement about it. Thanks so much for sharing this important side of the clean energy sector, David!

I agree we pride ourselves in "being there" where people are intersecting with clean technology solutions and this was a special opportunity to not only see solar doing what it does so well, but also to gain an insightful glimpse into the lives of the people. Raymond Cardinal is with the Athabasca Chipewyan First Nation from the fly-in community of Fort Chipewyan in Canada's north. The tour we included in our video was done in one take! Thanks again.

Off GRID Solar pv has been very cost effective for years. It didn't tell how big his system is or what type and capacity his batteries are. Also what do they run off it? Lights? Water pump? Cooking, heat?

Your report is invigorating. I wondered if there was any impact on the area from the Athabasca tar sands and runoff pollution?  That's obviously a big argument for  renewable energy in such a beautiful environment.

The oilsands operations are south of Fort Chipewyan, but the Athabasca River flow north here so whatever is in the river is coming to Fort Chip and heads north from there. Interestingly the community of 1,000 mostly indigenous people is off the main electricity grid. The local grid is operating by ATCO and consists of diesel generators. However recently a community-owned solar project (owned by Three Nations Energy) was developed to offset 25% of the diesel generated electricity. The solar project is 2.2 megawatts and has battery storage as well. The cabins are mostly more than one hour from Fort Chipewyan, across the lake and into the Delta. So solar in the delta is an amazing, almost cliche use of solar. Most First Nations used generators at these remote cabins. To get gas to the cabin it must be shipped over a winter road (that is only open to big tanker trucks for about 1 month per year) and then shipped by boat across the lake to the cabins. So solar is a great solution, plus there's nothing like a gas generator noise to spoil the wilderness!