The renewable energy market has come leaps and bounced over the last two decades. However, it now seems to have reached a point where it graduates from an emerging industry to a disruptive force in the energy sector.

Countries that had previously left the Paris Agreement like the US have rejoined since President Biden, while others have formulated policies to cut renewable energy deployment costs and promote innovation.

Therefore, as the push for a net-zero economy continues to gain popularity across the world, the private sector will begin to show more interest, with some of the leading energy production companies embracing renewables to boost future growth.

Data by the International Renewable Energy Agency (IRENA) already shows that the shift began 20 years ago with renewables increasing capacity share in new electricity generation projects. In contrast, non-renewables have continued to lose the battle in new project capacities. 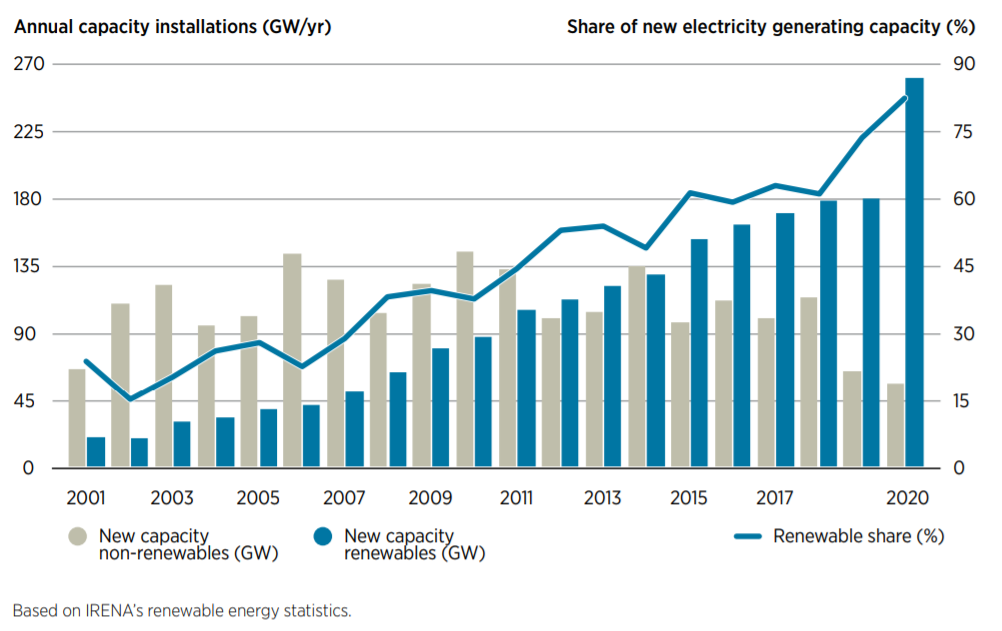 Therefore, will all these catalysts set to boost the growth of the renewable energy industry, it could be time to assess various investment options.

Not everyone has the capital to invest along the green energy supply chain. However, the industry growth over the last 20 years has helped to create some of the largest green energy companies, prompting public listing.

The clean energy industry’s growth has not gone unnoticed by investment funds. So, those who look for a more passive way of investment can invest in the green energy market through green investment funds like Green Century Fund in the forms of electronically traded funds (ETFs) and mutual funds.

The push for net-zero emissions is playing a key role in the fight against climate change. And for this reason, investing in green energy companies is viewed as something ethical. Therefore, green energy stocks will become more popular as the new phenomenon spreads.

As such, the likes of Cardano and Chia, are beginning to gain more popularity due to lower mining power consumption, deeming them green cryptocurrencies.

The wind of change is sweeping across several industry verticals with even auto manufacturers leaning towards electric vehicles. General Motors plans to 100% produce vehicles that do not use internal combustion engines by 2030, while American counterpart Ford Motor Company has the same plans for its European market.

In summary, green energy investing is gaining popularity as more people become conscious of the dangers of global warming. In the future, green energy investing could become an ideology that resonates with investors from all walks of life such that if your portfolio does not have a single renewable energy investment, then you could be deemed a non-believer in the consequences of climate change.

The bottom line is that, though farfetched, every investor with a rich portfolio of stocks may be mandated to have a few green investments to remain in good standing with the rest of the market. Now is the perfect time to begin looking at green energy investments.