Why $130 Trillion may not be wrong

The U.N. Climate Change Conference of Participants kicked off on Nov 1, 2021 and will go on through Nov 12, 2021. While there have been a number of material announcements regarding commitments to a net-zero future, here we take a look at the commitment from Glasgow Financial Alliance for Net Zero (GFANZ) chaired by Mark Carney, UN Special Envoy on Climate Action and Finance. This alliance brings together some of the world’s largest financial institutions that manage more than $130 trillion in assets. On Nov 3rd – christened the Climate Finance Day – they made several commitments:

The Chancellor of the Exchequer, Rishi Sunak, announced steps to make Britain the world’s first net zero financial center, and outlined the following steps as requirements for corporations in U.K.:

I know what many of you are wondering: Wall Street in New York and the City in London are concentrated on making money. Are they getting sidetracked with all this “do-good” feeling?

The answer is: absolutely not. Not for a second would I accuse the financial industry of altruism. Here is one graph that tells you the story. It is a five-year comparison of the different S&P indexes compared to S&P 500 overall index.

Nov 4th was named the “Transition to Clean Energy” day. The main theme of the discussion was loud and clear: coal is out. Despite the absence of some of the elephants in the industry at the discussion table, the predominant users of coal are searching for alternatives. For instance, Australia, one of the largest exporters of coal, has not made any commitments to reducing it, its customers are making commitments to wean themselves off! 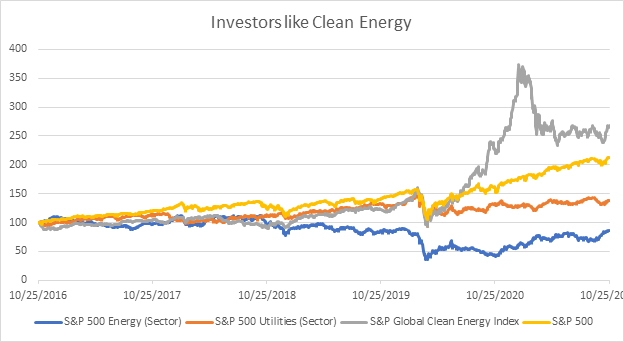 No, the financiers are not being nice guys – they can read the numbers, probably better than we can!