Where should batteries be put to manage wind and solar power?

Will Gorman is a Graduate Student Researcher in the Electricity Markets and Policy Department at Lawrence Berkeley National Laboratory. His research focuses on the economics of distributed energy...

Batteries are becoming an increasingly common part of new power generation projects, especially for solar and wind farms. Solar projects use batteries to shift generation from the day to the evening, to capture higher power prices as the sun goes down. Wind projects can use batteries to smooth power output and avoid congestion. In many cases the batteries are located with and integrated into the renewable power project, as a hybrid power plant. Wind and solar plants are located to take advantage of strong winds and sunshine, with plentiful land and good grid connections.

Batteries can be put practically anywhere, like in high-value locations where they can provide additional values to the local grid, such as voltage support, congestion relief, and resilience. With the right controls, they can also provide system-wide benefits, such as capacity and load following. New research from Lawrence Berkeley National Laboratory (Berkeley Lab) looks at the question of where batteries should be located to provide the highest value. Do hybrid renewable + battery power plants provide more value than independently sited installations?

Using wholesale power market prices from 2012–2019 across the seven main U.S. independent system operators (ISOs), the new study compares the market value of hybrid projects to the value of the same generators and batteries deployed separately. The study finds that adding four-hour duration batteries sized to 50% of the capacity of a wind or solar project raises the value by $3–$22/MWh depending on the year and region, with an average value of $10/MWh. The highest boost occurs in California ($15/MWh), where the value of adding storage to solar rises in tandem with increased solar penetration.

But an even higher value comes from siting the same batteries separately, in a nearby high-value location. This strategy results in higher value than co-located projects in nearly all markets and years, ranging from $2–$50/MWh, with an average value boost of $12.50/MWh. The highest values are found in constrained regions, like New York’s Long Island, while lower values occur in Texas in certain years of the study period. Through a variety of strategies, the value penalty of co-located projects can be reduced, such as by recharging batteries from the grid during low-price hours, or sizing the interconnection capacity so both the generator and the battery can deliver power to the grid at the same time. 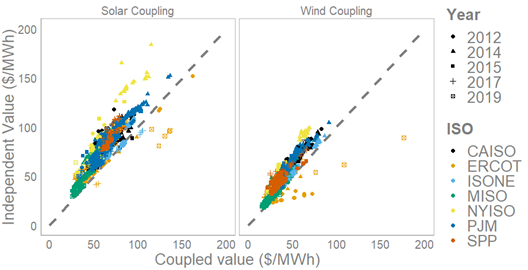 Figure:  Comparison of values for combined and separate projects

Separating generation from storage usually delivers higher value, but it may also deliver higher costs, as a project developer will need multiple sites and grid interconnections, and may lose construction cost savings. While the study does not go in depth on the cost difference between combined and separated resources, a rough estimate found about $15/MWh in cost savings from using a single location. 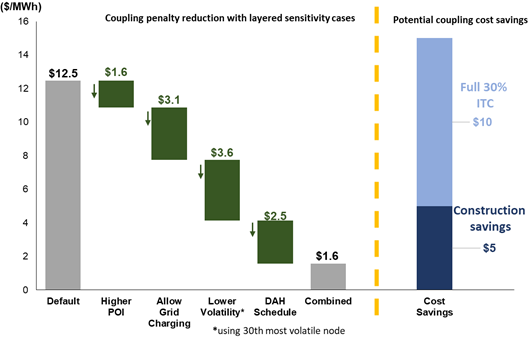 Figure: The penalty for co-locating generation and storage can be reduced by a variety of strategies, while co-location offers some cost savings and incentives

A big part of the savings is that the federal tax credit for renewable energy production can also be applied to batteries, provided the batteries are directly charged by the renewable generator. The tax credit, worth as much as $10/MWh, can tip the scale toward co-location, making coupled projects more attractive to the developer than separate locations.

Developers are increasingly adding storage to generation projects, especially solar. At the end of 2020, 34% of solar and 6% of wind capacity were being developed in the US with co-located batteries. In the West, 70%–90% of proposed solar is paired with storage, including almost all grid-scale solar projects in California. Almost two-thirds of all grid-connected batteries in California are part of hybrid solar + storage systems, rather than in potentially higher-value locations. In other regions, the share is typically less than 40%. 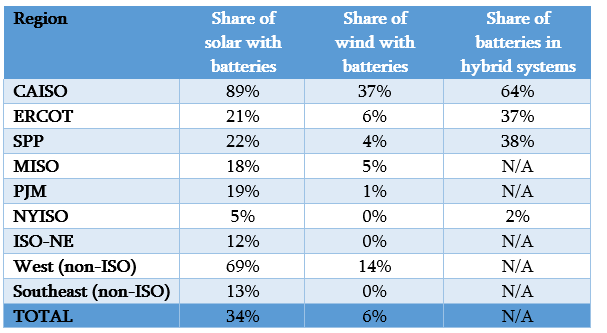 Figure: Share of proposed solar and wind projects with batteries, and share of batteries co-located with wind and solar generation, as of 2020

As developers and policymakers continue to search for the best way to deploy renewables and storage, this consideration of cost and value will be important. However, the relative benefits and costs can vary by market, by time, and by other factors. Depending on conditions, both separate and hybrid projects can pencil out from a system optimization perspective.

Thanks for sharing this Will-- I think the location aspect of different energy assets gets overlooked when people discuss their preferred solutions, as localized/regional impacts are so critical and there's a reason we're not using a one-size-fits-all approach. You and your team seem to be advancing the collective knowledge necessary to really figure out the jigsaw puzzle which is the optimal future grid!

"Solar projects use batteries to shift generation from the day to the evening, to capture higher power prices as the sun goes down."

A common misperception, Will. Batteries are located at solar farms for appearance only - they charge from a grid mix. Owners capture electricity whenever it's most profitable - often gas-fired generation in the middle of night. They sell it when it's most profitable, too - often during the day to help balance and smooth erratic output from the solar farm directly adjacent to them.

The solar farm creates the problem, the batteries create the solution. Quite the scam, isn't it?

Will, Great subject. It's clear the high value locations are the best use if the battery storage. In FACT we are so lucky to finally have storage like this. For years thus was only a dream. The potential is just being realized. It seems like Tesla has shown how their Mega Battery storage can make a big difference.

What other battery storage companies have you seen making a big difference?

GASCADE and Fluxys have applied to the European Commission for ‘Project of Common Interest’ (PCI) status for the AquaDuctus project.

Matt commented on ...
Are we at GO for the Green Grid?
Energy Central Jobs
Featured Jobs
More Jobs