Part I: A recent history of wind power in America

America is at a crossroads when it comes to harvesting energy. For many people, especially those in the coal industry, the writing has been on the wall for years. What especially strikes me is the level of irony surrounding coal jobs drying up and being usurped by wind power, especially in Texas. When you think of Texan stereotypes, you might envision a gun-toting oil baron lobbing his cowboy hat into the arid Chihuahuan Desert air as his spurs click together with oil-loving joy, but this age-old stereotype is rapidly being turned on its head.

I recently watched a news report where a now-former coal employee recalled being mocked by several of his colleagues a few years ago for making the gutsy switch to wind power before it had the hype it has now. The scorners had every right to feel justified—they were in a seemingly stable industry that had been around for hundreds of years; there was no visible sign of decline.

In this news report, though, the forward-thinking wind farmer in question had been vindicated with the decline of coal power in his region, and now some of the very same former colleagues who’d literally called him a tree-hugging hippie were now begging him for a job. This is not an isolated situation, especially in Texas. Texas now has more wind farms than the next three states combined, and this trend shows no sign of slowing; in fact, Texas also has more wind farms under construction than any other state currently has installed, according to a 2016 report by the American Wind Energy Association.

But it’s not just the Lone Star State that’s harnessed wind power—Oklahoma, California, and Kansas have also put in impressive investments into wind energy. California actually has the largest wind farm in the United States, boasting an impressive capacity of 1,548 MW. By the way, that’s enough to give an hour's worth of driving at maximum speed to 30,960 Tesla Model 3s.

To appreciate the dent that wind power is making, this chart puts matters in perspective: 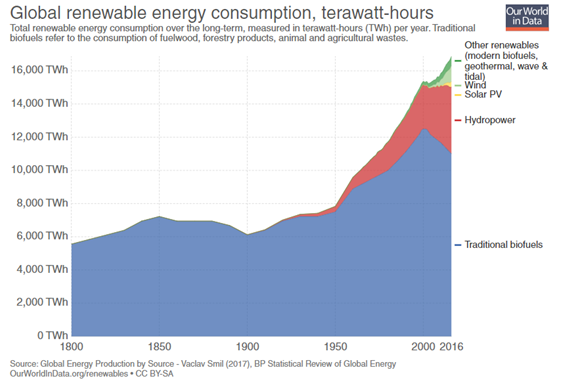 That lighter shade of green represents wind. As you can see, wind power didn’t even score a single pixel until the turn of the 21st century. But its growth is staggering; trajectory-wise, it’s even comparable to the oil boom of the late 20th century, which was largely driven by the significant increase in automobiles. It’s easy to see now why the fledgling coal industry has been propped up by the taxpayers; economic viability alone is no longer a sustainable proposition. Coal, like oil, is a depletable resource that is becoming scarcer and accelerating the harm to our planet.

Part II: The future of wind power in America

Before I talk about some great initiatives that are furthering the development of wind power in America, I’d like to touch upon electric vehicles; specifically, I’d like to address a major criticism that pertains to how they are powered.

As great as electric vehicles are, there’s a major downside if the energy that is harnessed to run them is sourced from fossil fuels. But even if this argument is used by oil apologists, there’s a major flaw in this logic that needs to be tackled. The simplest counter to this argument, I believe, is centered around the future-proofed nature of electric vehicles. A petrol- or gas-based car will be one forever (assuming it isn’t converted, but this only plays into my argument anyway, so let’s leave that point). This means it never has a chance to harness clean energy. By building a logistically sound infrastructural framework for electric vehicles, we can be ready for such a time when most energy in America is sourced renewably. Meanwhile, the feasibility of petrol- and gas-powered personal vehicles is destined to decline over time. People argue about when this shift will reach critical mass; however, regardless of the timeframe, it will eventually happen.

To minimize the use of fossil fuels, renewable sources will be in high demand. And, as we all know, when something is in high demand, the economic need for scaling will cause a run-on effect that will make investments into less-scalable ventures look less appealing.

One of the roadblocks to wind and solar reaching their full potentials is the matter of energy storage. YouTube channel Real Engineering recently released an excellent video on this subject called “California's Renewable Energy Problem”. I highly recommend watching the video for informational purposes, but the crux of the video pertains to the cost-effectiveness analysis of batteries to store energy from solar and wind sources. To further improve the viability of these sources, we need to ensure that the battery technology keeps pace with that of solar panels and wind farms. Unfortunately, a lot of power harnessed during peak periods gets lost due to our current inability to store all of it during high-load periods. In 2018, less than 2% of potential solar generation was curtailed; according to Mark Rothleder, who is the Vice President of Market Quality and Renewable Integration at CAISO, this number might reach 3%–4% this year.

Wind power continues to make technological leaps, with a 351-foot (107-meter) wind turbine blade being molded for a prototype just a couple of months ago. Battery technology, unfortunately, has not advanced at the rapid rate that, say, computers have; we see a similar problem with modern smartphones. Batteries are needed to store energy for long periods, and there are some financial complications that come with our current battery technology. The problem is that battery arrays are expensive—like, really expensive. So much so that they can turn cost-effective farms into far costlier sources than fossil fuels. The energy can be rerouted throughout the grid, but this is dependent on the energy generation of nearby power plants. The larger a solar or wind farm is scaled up, the more need there is for batteries. Given that wind and solar can be seasonal, you can see the dilemma facing the operators of these plants. The sweet spot of a farm's size largely depends on the cost and capacity of batteries. In a promising study published in the journal Batteries and Supercaps earlier this year, researchers from The Ohio State University built a more efficient and more reliable potassium-oxygen battery. This could potentially be a massive step towards fixing the issue of energy storage for these large farms.

Finally, Mark Jacobson’s Stanford simulations from 2014 showed that offshore wind farms can significantly mitigate the strength of hurricanes—enough to reduce peak wind speeds by up to 92 mph (148 km/h) and decrease storm surge by up to 79 percent. While this is news from five years ago, it’s something to bear in mind for the future. For example, Hurricane Katrina caused $180 billion in damage, including an additional $250 billion in economic impact. It doesn’t take an economist to deduce that $430 billion could buy a lot of offshore wind farms—not to mention potentially saving hundreds of lives in the process.

I spoke to Mark via email about assertions leveled at the study that building a signficant amount of offshore wind turbines would be cost-prohibitive. Rather than spin his words, I felt it most fair to cite his response verbatim. Here was his measured and insightful follow-up to questions of cost:

The latest cost of offshore wind based on EDFs agreement with France is less than 5 cents/kWh (that compares with 9.4–14.3 cents/kWh from our 2014 paper) (Table 2)

Those costs are amortized costs over the life of the turbine (say 20–25 years for offshore). So if they are paid their costs, they will recoup it over that period. Since they are taking a profit, their costs will be paid off sooner, but I don't know their profit margin.

From a social cost perspective (where health and climate cost savings are accounted for), the payback time is around 2–3 years.

Offshore wind is much less variable than onshore, and it is peak coincident, which minimized the need for storage, although storage will still be part of overall solution.

Here is an overall solution:

Personally, I can’t wait to see these problems solved as soon as possible. For our planet’s sake, they need to be.