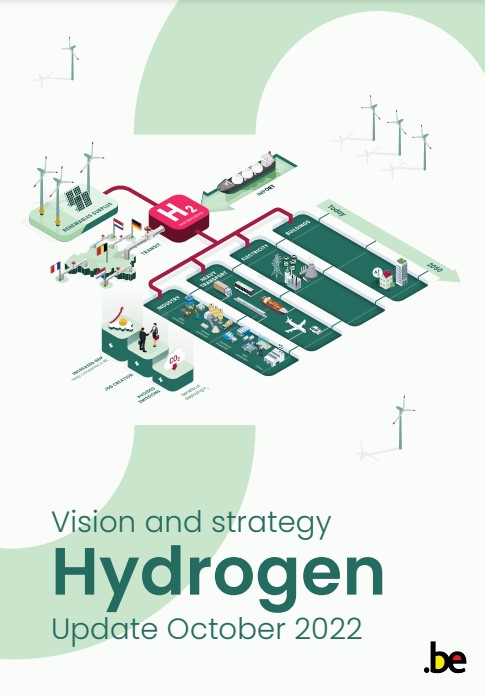 Climate change is accelerating and urges us to take the necessary measures to preserve our planet. In order to reduce greenhouse gasses by 55% in 2030 and to become the first climate neutral continent by 2050, Europe needs to transition its energy system from fossil fuels to renewable energy.

Much of the energy transition will focus on energy efficiency and electrification. Electrification is the most effective way to harness and consume renewable electricity and should remain the priority where technically feasible and economically realistic.

The power sector will follow with its flexibility needs and for coping with longer periods with few wind and sun. The building sector could partially rely on H2-molecules and/or H2-derivatives on the longer run. The total domestic demand for both H2-molecules and H2-derivatives will raise to 125 – 200 TWh/year in Belgium by 2050 (bunkering fuels included).

Only renewable energy will get a place in the final energy mix before 2050, and as soon as possible. A phased approach is however best suited to ensure both the lowest possible carbon emissions and a level-playing field for hydrogen in the current economic context. Fossil production with lowered GHG emissions (such as SMR and ATR installations coupled with CCS as well as pyrolysis plants) can play a transitional role to kickstart the market but should limit their exposure to the natural gas price and manage their risk of stranded asset if renewables become faster competitive than expected. The European Union has great ambitions for hydrogen (Hydrogen Strategy, RepowerEU) and assumes that about half of the H2-demand will be locally produced in Europe by 2030 (about 330 TWh to be produced in Europe).

In spite of these ambitions, electrolysis capacity will remain limited in Belgium because of the limited local renewable energy potential. Belgium is fully committed to accelerate the deployment of renewable energy sources in order to rapidly secure sustainable and affordable electricity production (ie offshore wind capacity will almost triple by 2030) but this electricity should in priority be used to decarbonise the electricity supply and to further electrify our energy needs, for instance for road transport and building heating.

Developing a minimum electrolysis capacity is nevertheless of strategic importance, both to gain expertise in the exploitation of these units and to support the technological development of Belgian companies

OIL COMPANIES and THE WINDFALLS OF WAR
Green hydrogen and ammonia production in South Africa
News round-up, Friday, February 3, 2023
First movers vs big spenders | Who has the edge in New York?