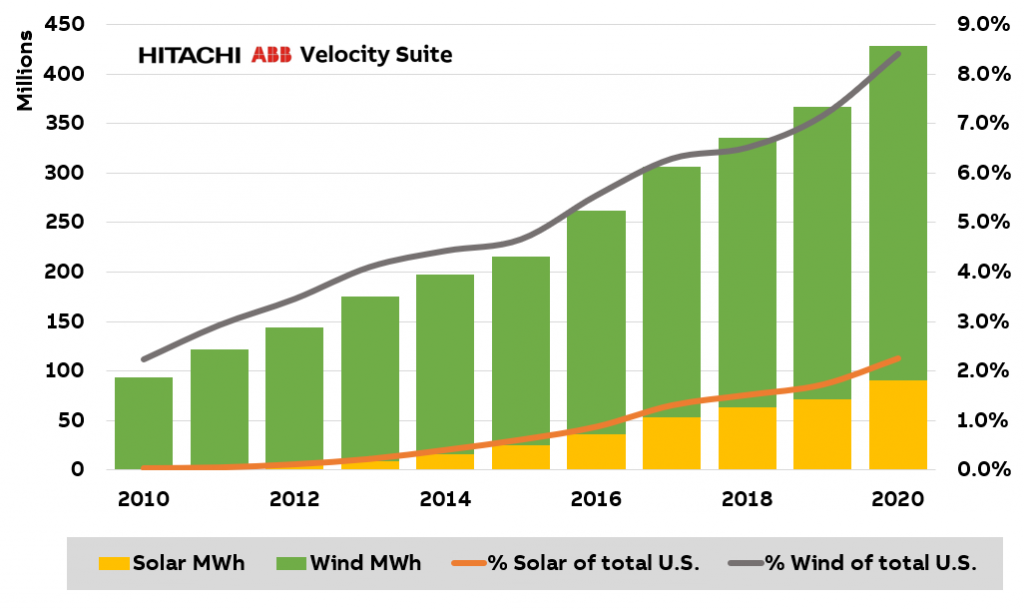 Wind added 15.4 GW, and solar added 10.9 GW of new capacity during the year, according to data compiled by the Hitachi ABB Power Grids’ Velocity Suite research team. Those figures represent record yearly capacity additions.  Wind capacity grew by a phenomenal 67.2% from 2019, while solar realized a 63.4% annual increase.  The record wind additions recorded in 2020 were 27.1% higher than in 2012, which was the highest previous annual buildout before this year.  Solar additions were 17.1% higher than in 2016, which was the year with the highest previous annual increase in solar plant commissioning before 2020. 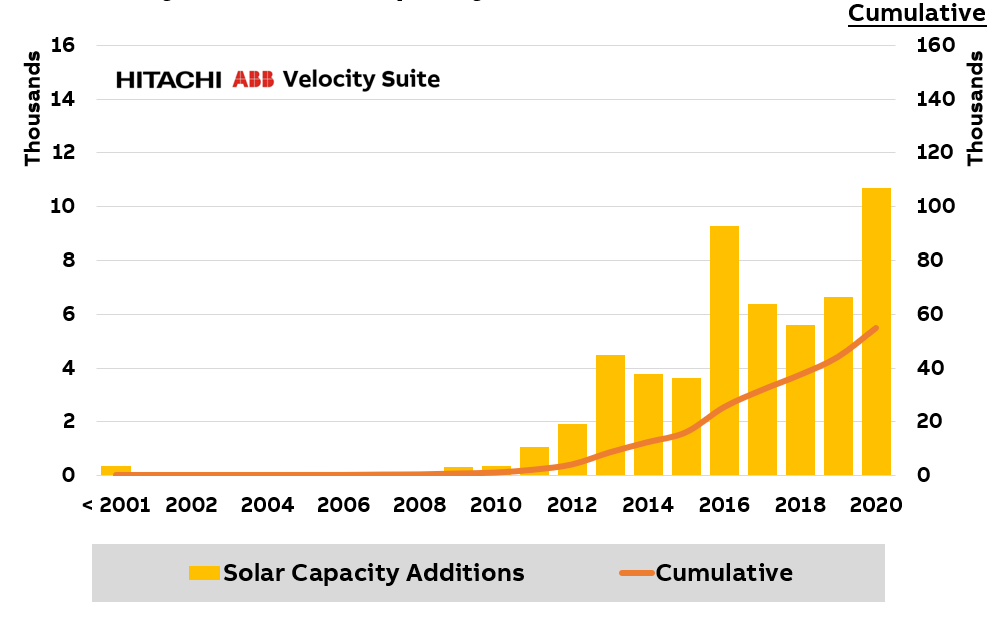 Attractive federal and state tax incentives and new investment by utilities and corporations to meet ever-growing clean-energy goals have driven the recent increases.  In December 2020, the U.S. Congress passed and enacted legislation that included extensions to the two most prominent renewable energy tax incentives – the federal Production Tax Credit (PTC) and the Investment Tax Credit (ITC).  The PTC, which supports wind among other renewable resources, was extended one year, while the Investment Tax Credit (ITC), which supports solar, among other renewables, and now energy storage projects, was extended by 2-years.  Projects starting construction in 2020 or 2021 qualify for PTC at 60% of the original rate on the electricity output for ten years or an 18% ITC on the project cost in the year the project is put in service. Production tax credits at 60% of the original full-rate are currently $15 per MWh.  The change was retroactive.  The ITC allows for a 26% tax credit for commercial solar investments through the end of 2022, drops to 22% by the end of 2023, and 10% by the end of 2024.  Projects must commence construction during the calendar year to qualify for tax credits in future years. After that, the window for the project to reach completion is four years, but there are currently ongoing discussions to extend the period.  Additionally, the newly enacted legislation provides a 30% ITC tax credit for offshore-wind projects if they have commenced-to-construct between January 1, 2017, and December 31, 2025.

The growth in renewables is not expected to slow anytime soon

Driven by these tax incentives and secured power purchase agreements, investors have moved rapidly to develop more renewable projects.  Our Velocity Suite research group has identified 18.7 GW of utility-scale solar projects currently under construction, testing, or undergoing site preparation – 73.3% (13.7 GW) are expected online in 2021.  For wind, those numbers include 14.5 GW, with 92.3% (13.3 GW) expected online this year.  Along with projects that have broken ground, there are numerous renewable energy projects that have applications pending or are currently permitted, including 12.8 GW of wind and 17.8 GW of solar that could be online over the next year or two.  Already, through March 17, 2021, more than 1.5 GW of wind and 1.3 GW of solar have come online and are currently generating electricity across the country.

The rapid solar growth is tied closely to a new boom in battery energy storage. According to the DOE’s Energy Information Administration (EIA), 4.3 GW of new storage projects are projected online in 2021, with most expected during the second half of the year.  This forecast buildout represents a four-fold growth in battery storage over 2020. The world’s largest solar-powered battery (409 MW) is currently under construction at Manatee Solar Energy Center in Florida.  The company has scheduled the huge battery to be online by late 2021.

Note: Final 2020 annual figures for individual projects are not fully available yet

Note: Final 2020 annual figures for individual projects are not fully available yet

With continued support from federal and state tax credits, driven by expanding renewable energy mandates, utilities, communities, and corporations will continue to invest heavily in wind, solar, energy storage, and much-needed grid infrastructure over the next several years.  Investment in clean electricity in America has never been brighter.

Additionally, the newly enacted legislation provides a 30% ITC tax credit for offshore-wind projects if they have commenced-to-construct between January 1, 2017, and December 31, 2025.

This shouldn't be undersold-- all the progress with wind has been great, but with the U.S. offshore wind market finally looking to come into focus there will be a nice pivot point upwards with even more wind generation that was previously untapped

The only people who should be surprised with these great results are the doubters. Also the old thinkers who promised Nuclear would be too cheap to meter. That promise has been met with Wind and Solar.

Today we should also mention and not be surprised that advanced Battery Storage is making low cost but intermittent Wind a solid 24/7  winner. It is also making Solar PV that comes when we need it most into even more valuable by storing the excess for use anytime it is needed.

These are true Renewable Energy Sources that will continue to grow.  When you put Wind and Solar in with Hydro and Geo-Thermal we can run the entire world and save money and the environment at the same time. It is no surprise to me.

Jim, nowhere in the world is "intermittent wind a solid 24/7 winner." Maybe you haven't heard, but for several days in February wind was a solid 24/7 loser in Texas - with catastrophic results.

And your "advanced battery storage"? On any kind of scale to power an electrical grid, it doesn't exist - and never will.