The latest issue of EIA's "Monthly Energy Review" report (with data through June 30, 2021) reveals that renewable sources accounted for 12.91% of the U.S. energy produced (and 12.71% of the energy consumed) for electricity, transportation, heating, and other uses. Renewable energy production during the first half of 2021 was 6.160 quadrillion Btu (quads) - 3.03% more than during the same period last year and 4.23% higher than in 2019.

Meanwhile the energy supplied by the mix of fossil fuels - 37.550 quads - also declined by 1.67% and 5.57% respectively but still accounted for 78.69% of total domestic production and 78.83% of U.S. energy consumption. Fossil fuel consumption during the first half of 2021 actually increased by 6.50% compared to the same period in 2020 (including a 28.73% increase in coal) and is the primary reason why carbon dioxide (CO2) emissions from energy use also rose by 7.72%.

"The continued dominance of U.S. energy production and use by fossil fuels and the corresponding rise in CO2 emissions is alarming," noted the SUN DAY Campaign's executive director Ken Bossong. "Fortunately, renewable energy sources are slowly expanding their share of the energy market ... but must accelerate far more rapidly if we are to avoid the worst consequences of climate change."

SOURCES: The U.S. Energy Information Administration released its latest "Monthly Energy Review" on September 27, 2021. The data cited in this release can be found at, or extrapolated from, the following tables:

Meanwhile the energy supplied by the mix of fossil fuels - 37.550 quads - also declined by 1.67% and 5.57% respectively but still accounted for 78.69% of total domestic production and 78.83% of U.S. energy consumption. Fossil fuel consumption during the first half of 2021 actually increased by 6.50% compared to the same period in 2020 (including a 28.73% increase in coal) and is the primary reason why carbon dioxide (CO2) emissions from energy use also rose by 7.72%.

Not only is overall FF use dropping, but within the fossil fuel piece of the pie there's a shift for it to be coming more from gas than coal, which further reduces emissions. We don't want to lock gas in for the long-term because it's still a carbon emitter, but in the near-term it is worth noting the reduction of emissions from that changing dynamic.

Ken - glad to see you back in the community - thanks for sharing!

Ken, nearly all production of electricity from renewable sources in the U.S. is unscalable - there are finite limits to how much energy we can extract from hydropower, geothermal, biomass - everything except for solar and wind.

The graph below will give you an idea of how inconsequential, how pitifully small their contribution to our electricity is. Given electrifying transportation, water heating, and space heating could easily double electricity consumption in the next two decades, there is no possible way solar and wind can keep up - we'll be forced to rely on natural gas to make up the difference. In 2021 or 2051, that's an unacceptable option.

Of course renewables have always been an unacceptable option, and it only becomes more evident they're a waste of precious time. 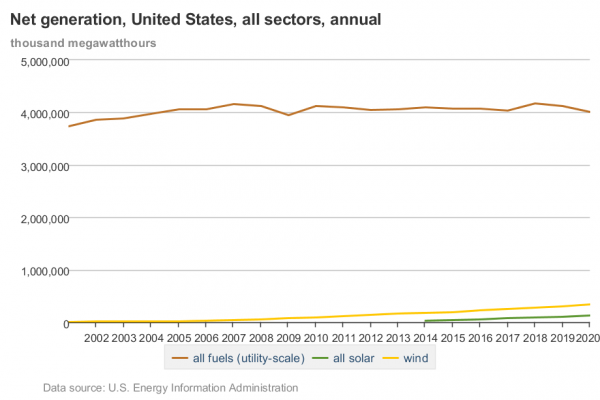 Ken, Thanks for the update. It is doing well and still growing fast. Projecting out 10 or 20 years and it is for sure the majority of all power. As more appliances and other devices get more efficient the loads may not grow as fast. Like LED lights that are 10 times more efficient I this Air Conditioning units will become much better with somealready hitting SEER 20 to 30. It looks good for the future I just hope it's not to late.