U.S. mega-solar projects on the move There are 10.4 gigawatts (GW) of utility-scale solar capacity currently under construction across the United States, according to project data compiled by ABB’s Velocity Suite research team.  Along with those projects underway, there are 11.9 GW of solar developments currently holding permits that are expected online over the next three years, with most, 7.4 GW, possible this year.  If all goes to plan, 2020 could mark the largest single-year build-out in solar power generation ever in the U.S. 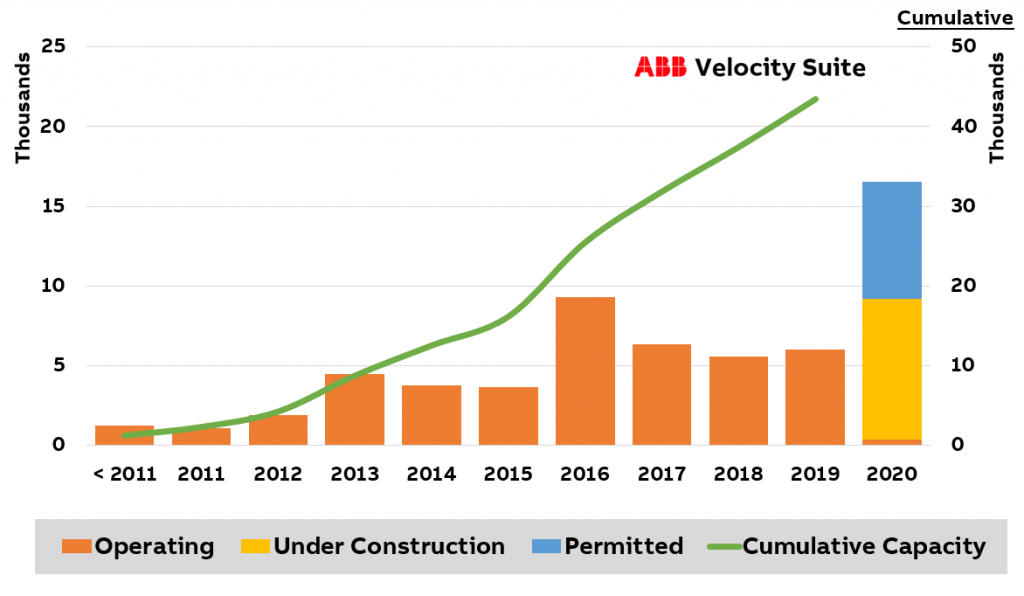 In just the past two weeks, two massive solar projects were announced.  On March 2, 2020, American developer CIM Group announced they would be advancing the development of their Westlands Solar Park (WSP), that when complete, will be one of the largest permitted solar projects in the World.  The roughly 20,000-acre WSP is in the San Joaquin Valley in western Fresno and Kings Counties in Southern California.  The project is designed to open in phases to meet public and private needs as they unfold over the next several years.  The first phase of WSP includes Aquamarine, a 250 MW solar photovoltaic (PV) project, that has obtained all permits following a full environmental impact review.  The project is expected online in late 2021.

On the other side of the country, in Florida, the Southern Alliance for Clean Energy (SACE) issued a statement on March 3, 2020, that the Florida Public Service Commission unanimously (5-0) approved the SolarTogether program proposed by Florida Power & Light (FPL) and SACE.  SolarTogether involves the construction of 1.5 GW of solar capacity and $1.8 billion of investment.  Once completed, SolarTogether will be the largest community solar program in the U.S.  The FPL project includes twenty 74.5 MW individual projects.  FPL customers will be able to begin signing up for the program on March 17, 2020.

Five out of the top 10 largest utility-scale solar development projects currently under construction across the country are in Texas.  The top 10 include:

Solar has grown rapidly as both a utility and distributed-energy resource in recent years.  During the month of July 2019, electricity production from utility-scale solar farms topped 8 million MWh for the first time.  Power from small-scale photovoltaics generated an additional 4 million MWh that month – combined for roughly 12 million MWh. 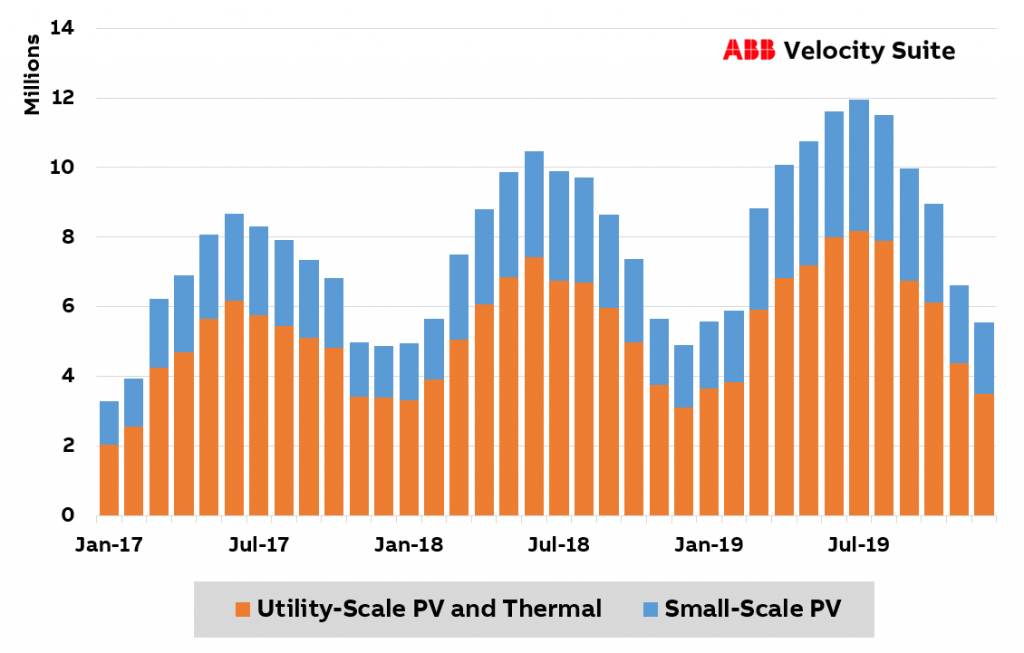 Through the full year 2019, for the first time ever, the combination of utility-scale and small-scale solar topped 100 million MWh, reaching 107.7 million MWh.  Small-scale solar PV (distributed energy) accounted for about one-third (35 million MWh) of the year’s power production from solar resources – up 18.6% (5.5) from 2018. 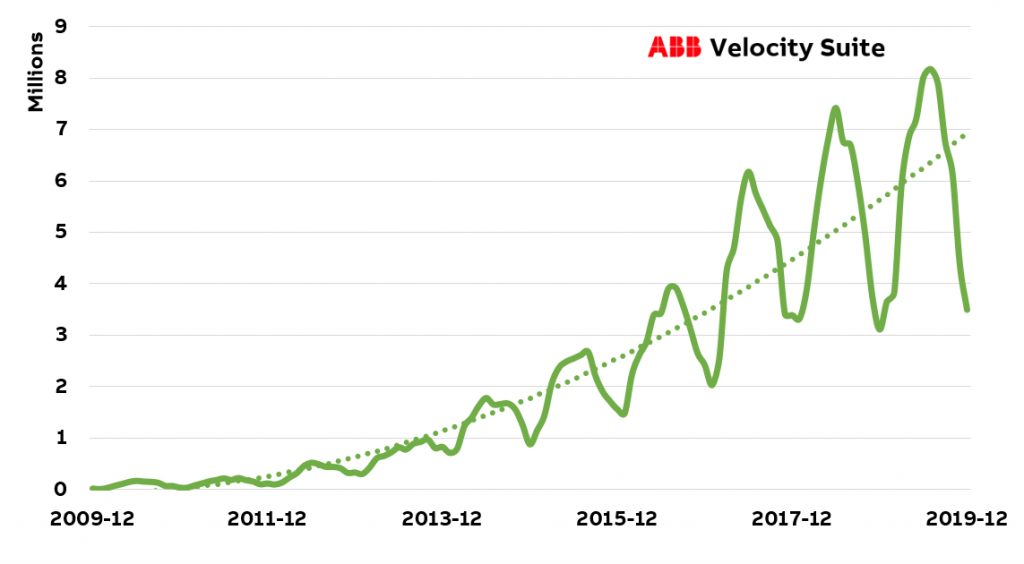 With more solar power on the grid comes greater swings between seasonal output.  Considering utility-scale solar power production in 2019, July production was about 57% higher than in December.  Solving the intermittency problem with energy storage, both short-term for daily curve-flattening, and long-term for seasonal variations is paramount for solar to reach its full grid potential.  Today nearly every solar development project is coupled with energy storage.  There are several innovative new technologies, including the development of large-scale green-hydrogen technology, that shows great promise for new ways to balance seasonal variations in solar power production.

The combination of customer preference, state and corporate mandates, declining costs, and the development of new innovative solar and storage technologies, will continue to drive growth in solar as the country continues the path toward a cleaner power future.

What is Texas doing right that other states can learn from? Is it a matter of regulations favorable to large-scale solar, a unique market demand for it, or something else?

Matt, I'll leave your question to experts in finance, policy, and technology . . . but with that said, Texas has perhaps the most renewable friendly geography of any state . . . abundant wind and abundant sun, and of course even abundant natural gas.  Everything is bigger in Texas.

What got me to wonder is because of course Texas is on the higher end for solar irradiance being such a southern state, but this isn't talking about greatest total solar installations (which its massive size would permit), but simply that the largest singular installations were going in there. Makes me wonder why similarly large installations aren't going up in Florida, Louisiana, New Mexico, etc.

Moreover, the Gemini project will have 380 MW of 4 hour battery storage and will cost around $38.44 per megawatt-hour.

It makes me very very happy to hear the news you have just shared.

I have been a bit curious on a critique which I have heard from many... They claim (!) that it is not easy to get rid of the PV-cells, once they are worn out.

Rather than a polarized Yes-No conversation, I would like to know, if you know about how one decomissions them. Several evil tongues claimed that they contain "Substantial amounts of chemical poisonous substances".

I know that in certain settings, Arsenic (?) is a compound. I understand from agin others, that this (Arsen) is being used as "pollutant" to create the semiconductor photo-electric effect.

From electronics I know that the pollutant is only a weight wise very small part - something below 1% (is this true?).

Yet - if we take for instance my own solar panel - a PV-panel where each panel delivers 160 Watt, and weighs some 11 kilogram, 1% would amount to 110 gram of the panel, is that true?.

Furthermore, I know that the silicon production part is going on at very high temperatures - some in the hundreds and some above a thousand degrees (Celsius).

What prevents us from melting them altogether again and reuse the material, in a process which can impossibly cost more than USD 500 per kiloWatt of panel.

If we now assume that the melting and refurbishment of such panels is possible via an energy consuming process - then we would be fools if we did not use some of the available panel power to run this refurbishmend / remelting process.

Let us assume that it would "only" be 10% or even 1% of the same - we are thereby releasing quite some Arsen into the environment, unless we find good and Cradle-to-Cradle like ways to curb this problem.

I am, myself, in the solar concentrator business. We have made great progress in concentrating solar power on solar cells. However, we would be very happy to hear how we handle PV-cells, cradle-to-cradle, if you have any ideas about that, or know who have actually made experiments with the decomissioning, or have established solar-refurbishment plants, etc. etc. ???

Thanks for a very well written, well documented article.

Do you happen to know a company in Sweden called Azelio? We have just got to know about them - they do heat storage. Another possible partner to consider is the Danish research lab RISØ - they started a monumental research project last year March 2019 - on heat storages... (Sponsored by international funding and governments).

We have - today - got to know about yet another likely relevant company - called TEGnology (spelled like that :-) ) - they make recovery of energy via TEG-elements. I could imagine a constellation between what you are talking about - the PV, and Azelio's/RISØ's storage and TEG-elements. We'd love, later (we are not ready yet ...) to join in and provide concentrated solar power :-) :-) ...

I do not at all know if their system can work - but i read about them in another article here on energycentral.com - and I would guess that these storages could be something for those guys, due to the commonly known problem that the sun is not always there :-)

David, thanks for your insightful comment. I am not an expert on the recycliing of solar panels but one thing is for certain, recycling both wind turbines, towers, and solar panels will become a huge business (opportunity) in the future.  I posted the following story back in November to highlight the evolving market for repowering and recycling wind farms.  We'll be keeping a close eye on these markets as they develop.  thx again for your comments.  https://energycentral.com/c/cp/wind-farm-repowering-and-decommissioning-...