Over the past decade the electric power industry has seen a dramatic drop in the usage of coal and its replacement by NG and renewables. Coal represented 1,847 TWh of generation in 2010 and dropped all the way to 966 TWh in 2019.  Because of this CO2 from the electric sector has also dropped dramatically from 2,270 MMT in 2010 to 1619 MMT in 2019. This is a remarkable average of about 70 MMT per year. 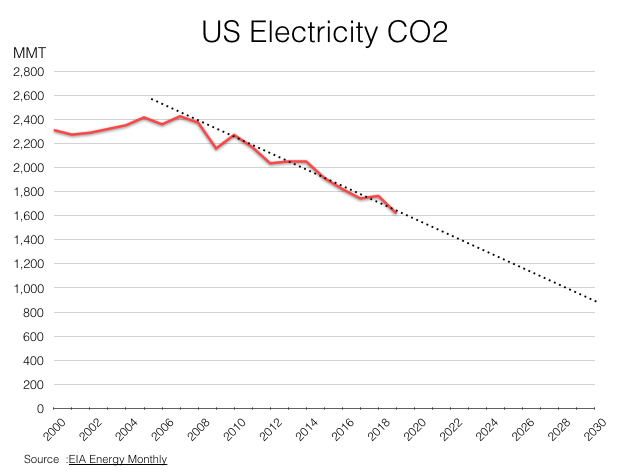 Why don't we hear more about this remarkable transition.? Do people think it is a short-term blip and we will go back to "normal" anyday now?  Maybe part of this skepticism come from the annual EIA reports which every year show a miraculous recovery "coming soon" for the coal industry and therefore a flattening of CO2 decline. 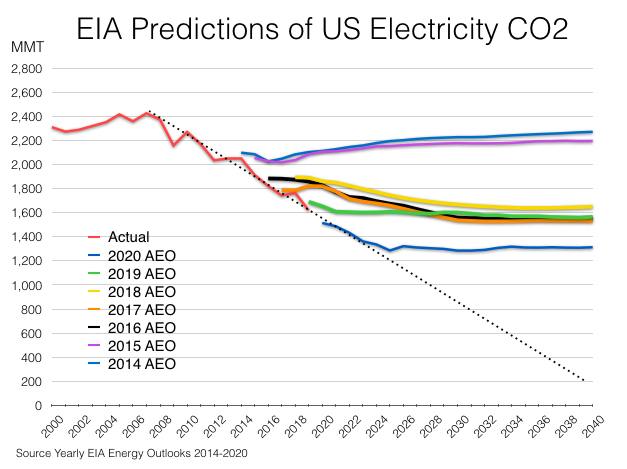 Some might say - you are just extrapolating a trend - we have been lucky over the past 9 years - that's not gonna continue. How do we squeeze 770MMT out of the US CO2 Electricity market over the next 11 years?  By continuing to replace coal. Plus replace slightly more of it with renewables than we did in last decade. 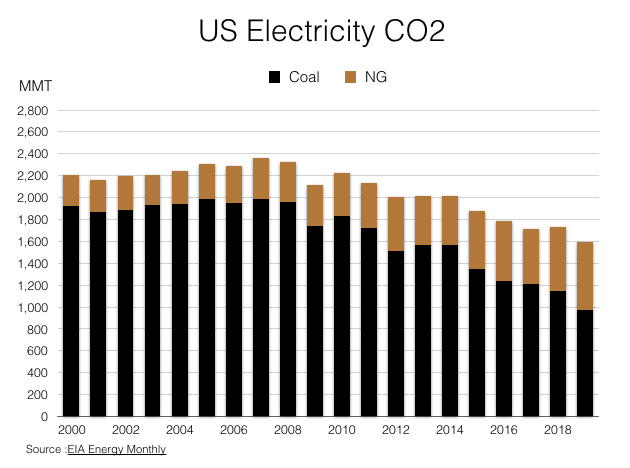 Coal generated 973 MMT of CO2 in 2019 vs 619 MMT vs NG.  So, we need to replace almost all of this coal by 2030 and not add a lot of new NG generation. In other words, replace most of the coal generation with renewables.   We do the same thing that has been done for the last decade. Keep shutting down coal plants and keep building renewable projects.  Nothing miraculous - just steady progress.

Although the Covid shutdown starting in March will make this an unusual year we do have normal Jan-Feb data.  Coal usage thru is down 33% Y-Y and CO2 emissions for January were down 30MMT Y-Y.  Way ahead of schedule!

Joe, the source of the data in your first two graphs, which appear to be identical, is attributed to "EIA Energy Monthly". Questions:

1. Two graphs because this website includes the image from summary in article. I am not showing data out to 2030. The red line is actual CO2 yearly emissions and the dotted line is a slope line.

2-3. Didn't include petroleum and biomass because they are not significant.  Petroleum at 16 MMT in 2019 will be in low single digits by 2030. Biomass was at 41MMT last year (down 10%). Here is new chart for you with them included. Doesn't change the story. 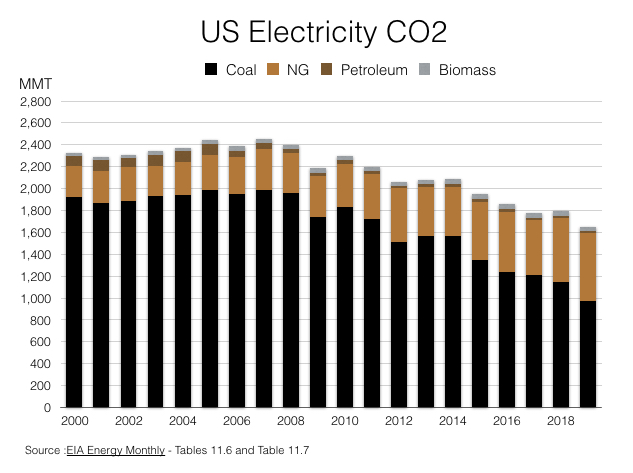 4.  No I don't.  However, this is a distraction from main issue which is decreasing fossil fuel CO2 emissions.

To recap the story:

Plus of course - all of the above will happen with zero help from nuclear. In fact nuclear generation in the US will probably decline over the next decade.

1. Why was the "slope line" on your EIA graph extended to 2030? Is that your invention?

2. Where, specifically, is gas being replaced by "renewables + storage" - batteries limited to storing 100% renewable energy?

3, Nuclear is certainly helping to lower carbon emissions, although you don't show it on your graph. But if zero-carbon nuclear is replaced by renewables + gas, carbon emissions can only increase. In that case, would renewables be of "less-than-zero" help?

1. Its my graph - not "EIA graph". The source of charted data is EIA - the line is mine.  Should have called this trendline vs slope line. As the title indicates, this article talks about the decline of CO2 in the next decade.

Going forward, any year between now and 2030 may end up being charted above or below the trendline. For example, in order for the year 2020 to be below the line, the US would need to lower CO2 emissions by at least 70MMT.  Do you think CO2 will drop by at least 70MMT in 2020?

Hint: we are already down about 45 MMT thru Feb. (pre-Covid shutdown)

EIA also just came out with the following article about last years emissions in which they said:

2. Right now - NG is being replaced by renewables and storage in CA and NV.  Since storage is just getting started most of the replacing is being down by solar.  Over the next few years many other regions will be near zero coal and NG will be replaced by renewables/storage going forward. For example, below are the fuel shares for FPL in Florida for 2019. FPL has just started to install a large amount of solar/storage. The solar share will jump to 10% over the next few years as it eats share from NG. 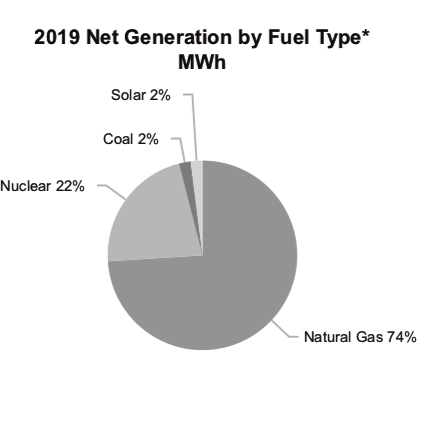 3. Nuclear went from 807 TWh in 2010 to 809TWh in 2019. In other words, it provided a miniscule amount of help in lowering emissions.  As you imply, more nuclear will probably be shutdown over the next decade. So the 20s will be another decade without help from nuclear in lowering CO2 in the US.  Maybe nuclear will actually increase generation in the 2030s?

By the way, for nuclear WW - not a single construction start so far in 2020.

On the shutdown side:

This is after 13 reactors shut down and only 4 construction starts in 2019. Pathetic.

Maybe. But if the projected decline in coal through 2030 is your own artwork, it's a bit disingenuous to suggest EIA should take the blame for such a simplistic linear projection. Isn't it?

"Right now - NG is being replaced
by renewables and storage in CA and NV."

Though banks of batteries are being erected next to solar farms to suggest they're only being used to store clean energy, such an installation does not exist anywhere in the world (and for good reason - it would be a horrendous waste of money).

Grid batteries store whatever mix is on the grid at the time - including electricity generated by burning gas, coal, fuel oil, biomass - whatever else can be burned to boil water. And due to resistance and bi-directional inversion losses, what comes out of a grid Li-ion battery is at least 15% dirtier than what went in.

So at best: "some gas-fired generation is being replaced by dirtier generation coming from a battery, mixed together with a little renewable energy".

Have you seen Michael Moore's new film "Planet of the Humans"? You might be surprised to find out what qualifies as "renewable" in 2020.

Maybe. But if the projected decline in coal through 2030 is your own artwork, it's a bit disingenuous to suggest EIA should take the blame for such a simplistic linear projection. Isn't it?

Not decline in coal - its decline in CO2. I actually show the EIA projections in a separate chart - with the title - EIA Predictions of US Electricity CO2.  Reading comphrehension - its a beautiful thing.

Are you saying the trend for 2010s was not linear?  What do you think the slope will be like in 2020s - increase downward, what I showed, flatten out, or move upward?  Whats your projection?

And due to resistance and bi-directional inversion losses, what comes out of a grid Li-ion battery is at least 15% dirtier than what went in.

"Though banks of batteries are being erected next to solar farms to suggest they're only being used to store clean energy, such an installation does not exist anywhere in the world..."

Drive a little and you'll  be able to visit these next year.

NextEra Energy Resources will build three of the SCE projects, which are also the largest of the seven selected by the utility. Those include a 230-megawatt/920-megawatt-hour project connected to NextEra’s 250-megawatt McCoy solar farm, and two projects of 115 megawatts/460 megawatt-hours apiece adjacent to NextEra’s two Blythe Solar Energy Center solar farms. All are located in Riverside County.

The final project is Terra-Gen Power’s 50-megawatt/200-megawatt-hour Sanborn project in the Mojave Desert. That project will be interconnected with a solar project now in development by Sanborn Solar, meant to provide 300 megawatts of solar generation and up to 3 gigawatt-hours of storage capacity.

Why would I watch a Michael Moore film?  He's a big buffoon, an eejit.  Just curious - are you also promoting drinking bleach?

I'll stick with what is actually happening in the real world as shown by data.

For example - from EIA.