For all the good that wind farming can bring, it is eradicated by a small amount of Methane, aka Natural Gas. 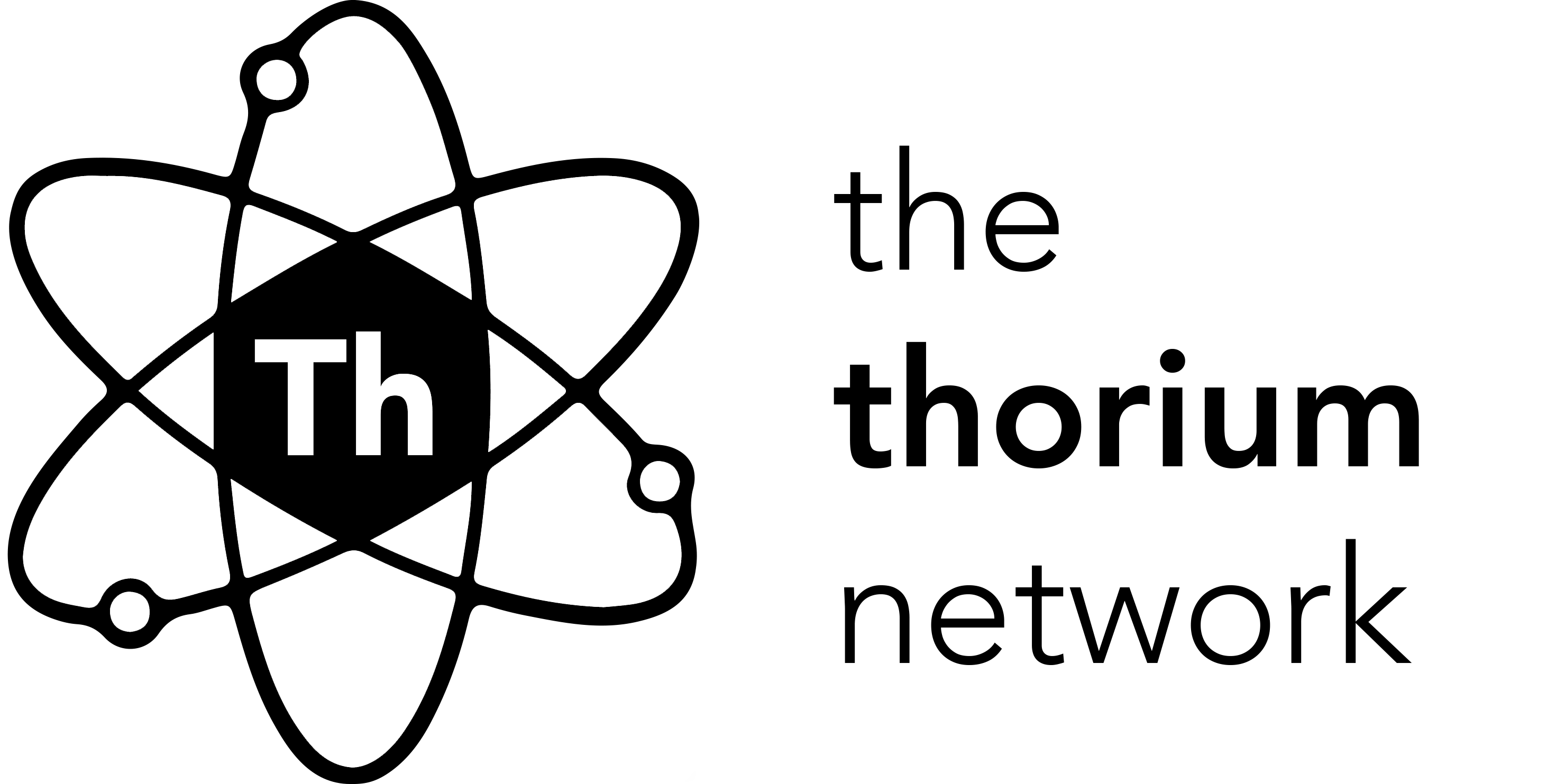 Unfortunately, switching from a variable resource to a baseload resource doesn't solve the problem of fossil methane generation. We still need a load following resource because nuclear can't cost effectively cut its capacity factor to serve changing loads. It may easier to to reduce load following requirements with renewables in two ways: develop a mix of wind and solar that best mimics the load profile or overbuild renewables so that they can curtailed during low load periods. The latter is likely cheaper than building nuclear plus storage which would be required to displace fossil methane generation.

Unless one uses load-following Molten Salt Fission powered by Thorium.

Even if load following were a fundamental problem for nuclear reactors (it's not), accommodating a resource that produces more power than is sometimes needed to meet demand is an altogether different problem than dealing with one that produces less. If nothing else, excess power can always be dissipated in a resistor bank, or used to charge a cheap thermal energy store.

In fact, pairing a nuclear power plant with a cheap thermal energy store and using the energy store to drive a steam peaking power unit has been proposed (by a senior MIT nuclear engineering professor IIRC) as a cost-effective way to reduce the nuclear power nameplate capacity needed to achieve a 100% zero-emissions energy economy.

There is no question that the total CO2 GHG emissions saved by burning gas instead of coal is nearly or even more than negated in the US by the increase in GHG methane emissions from exploration, production, treatment, transport, transfer and storage of natural gas.  It need not be so.  If the US EPA and the Texas Railroad Commission could and would take action, a great deal of the methane emissions could be avoided.  That, unfortunately, is a tall task, given the influence of the E&P industry to avoid even proper measurement of the emissions, let alone to reduce them.  The Permian Basin fracking "miracle" has been a big money loser for years, that is, until the current run-up in prices. They are not likely to spend money and time to monitor and reduce methane emissions without much better regulation.

However, substituting wind, solar and geothermal for gas and/or coal does result in reduced GHG emissions.  It is incorrect to imply or state that methane emissions are in any way an "unintended consequence" of wind power.  Please clarify your post.

On the other hand, how many load-following Molten Salt Fission powered by Thorium generators are currently in operation?   When and if Thorium generators become commercially available and viable, they may be an effective complement to wind, solar and geothermal power.

So, how much do they cost to build and operate? Do they have a demonstrable safety record?  For that matter, will one be up and running before a nuclear fusion reactor is?

The hand-wringing about methane emissions from natural gas is overblown. What next, cow farts? Oh wait, the “greens” are already hysterical overreacting on that.

In any case, the Thorium Alliance is not exactly a disinterested party.

f there is "no question" then why is there any debate?

One thinks that is the crux of the entire argument and Molten Salt Fission Energy powered by Thorium was proven in the 1960's as a viable and vastly superior energy production technology.

And that vast effort was engineered to stifle this technology so the world could go back 200 years and try and live off wind and solar.

(Something Germany has failed miserably at - whilst increasing their CO2 emissions - if anyone really cares about that anyway).

It takes about 24 months to build a 100 MW machine (Molten Salt Fission Energy), mostly factory build, and energy costs would be in the order of 1 to 3 cents per kWh.

There is no question that the total CO2 GHG emissions saved by burning gas instead of coal is nearly or even more than negated in the US by the increase in GHG methane emissions from exploration, production, treatment, transport, transfer and storage of natural gas. <..>

I suspect you've been reading Howarth and Jacobson. Their paper on the subject has been taken up and widely cited by one sector of the environmental movement. But it's deeply flawed, and should never have passed peer review. Global methane emissions are alarmingly high and rising, but "exploration, production, treatment, transport, transfer and storage of natural gas" have very little to do with the overall problem. I wrote about that in some detail here.

You're right, though, about what could (and should) be done to help reduce methane emissions.

No, but, thanks for the interesting Howarth and Jacobson article.  Whatever the GHG emissions are from "blue" hydrogen production, they are in addition to methane emissions from gas production and processing activities.

The data I quoted are from the EIA and discussed in Energy Central here.  The factor of "28" was used for the multiplier of the GHG effects of methane compared to CO2.

So, in just one year, methane emissions from venting and flaring negated more than a quarter of the claimed reduction of GHG emissions from CO2 since 2005 as a result of replacing coal with natural gas. At this rate of flaring and venting, the net emissions of GHG from just Texas and North Dakota gas will negate many times over the reductions quoted in this article. 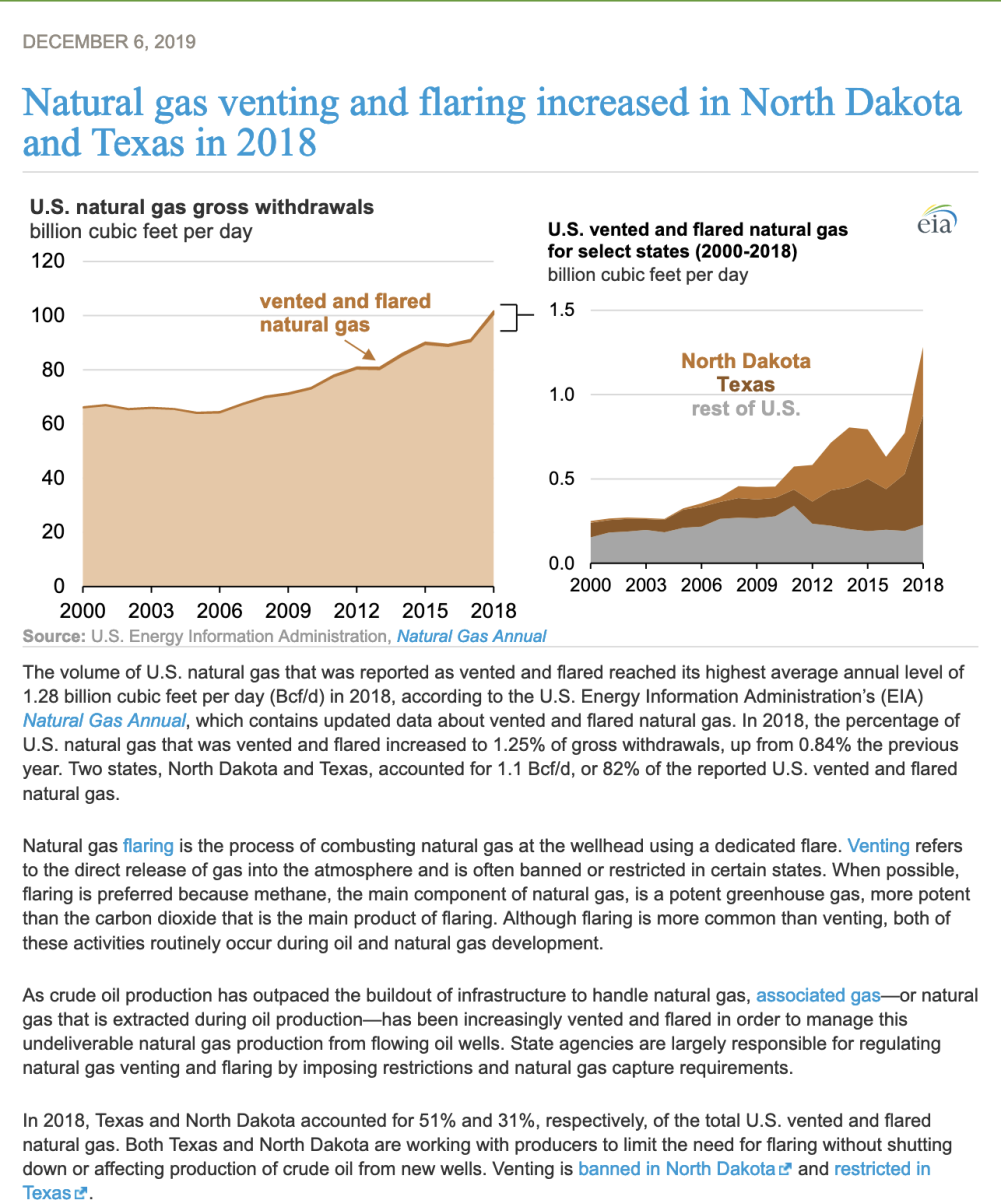 The argument becomes stronger when one takes into account the Texas Railroad Commission`s numerous "exceptions" to the rules about flaring and venting which are "off the books", as well as methane from wellhead leaks, liquification and revaporization (where applicable), transferring and pipeline operations.  One proprietary and conservative estimate of methane losses from "conventional" (not fracking) gas production, treatment, transport, transfer is 6-7% of production. After all, operators meter quite accurately (multi-phase metering) gas produced, gas burned in processing (removal of water and recovery of anti-freeze) and gas delivered. Where do you suppose the rest goes?

Further add emissions from abandoned wells.  There is great uncertainty in these estimates. One study suggests:

"We estimate the number of abandoned wells to be at least 4,000,000 wells for the U.S. and at least 370,000 for Canada. Methane emission factors range from 1.8 × 10–3 g/h to 48 g/h per well depending on the plugging status, well type, and region, with the overall average at 6.0 g/h. We find that annual methane emissions from abandoned wells are underestimated by 150% in Canada and by 20% in the U.S. Even with the inclusion of two to three times more measurement data than used in current inventory estimates, we find that abandoned wells remain the most uncertain methane source in the U.S. and become the most uncertain source in Canada."

That range of uncertainty is enormous (1.8 × 10–3 g/h to 48 g/h per well). So, nobody really knows whether it´s hundreds or hundreds of thousands of tons per year.