The heat came early this summer in Texas.  On Monday, July 13, 2020, during hour 17, the ERCOT (Electric Reliability Council of Texas) market peaked at 74.3 Gigawatts (GW), only 0.2 GW below the all-time ERCOT peak set last summer (2019) on August 12, but a full 3.3 GW above the all-time July peak also set last summer.  During July 2020, ERCOT issued only two Operating Condition Notices (OCNs), one for extreme hot weather with forecast temperatures above 103 degrees Fahrenheit (F), and one warning that tropical storm Hanna might make landfall.  During the month, there were only seven advisories for Physical Responsive Capability (PRCs) < 3,000 MW – an indicator of falling reserve margin.  In comparison, during August 2019, ERCOT issued six OCNs, nine advisory PRCs, one watch for supply dipping below 2,500 MW, and two energy emergency alert level 1’s (EEA1) for reserves dipping below 2,300 MW.  During the EEA1 events, market prices for electricity reached the market cap of $9,000/MWh on several occasions.

ERCOT is one of the largest organized markets in America -the market covers approximately 90% of the largest energy-producing state in the country.  There are more than 26 million customers across the region and more than 46,500 miles of high-voltage transmission. 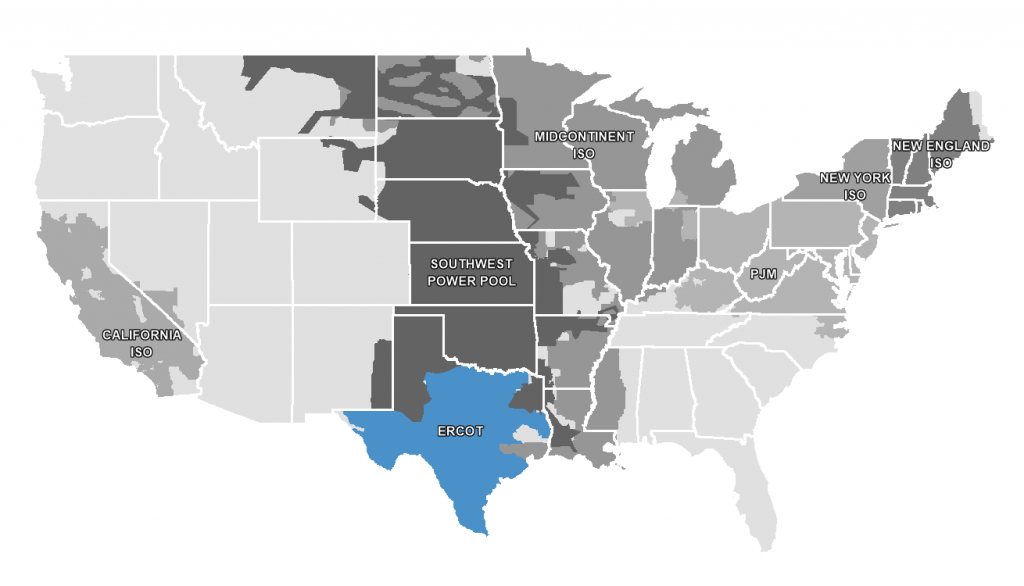 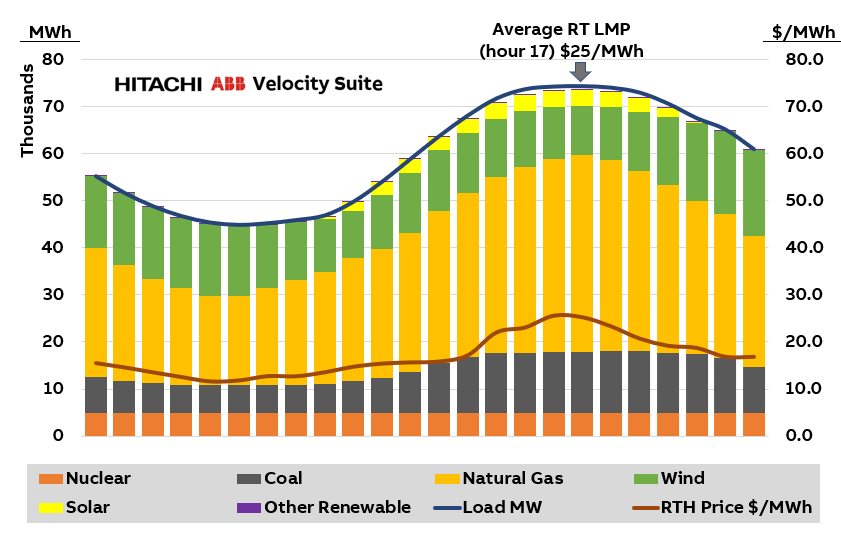 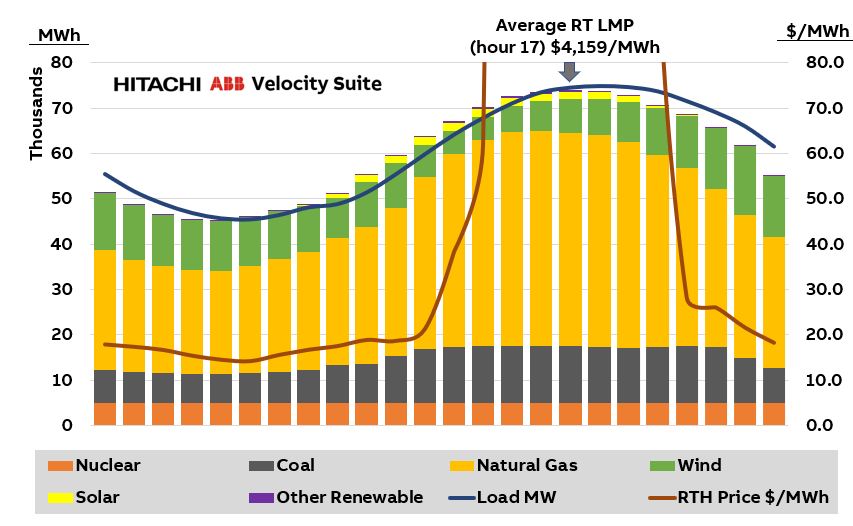 There was considerably more thermal power needed to meet the 2019 peak, and it came at a relatively high price.  During the 2019 peak hour, the average real-time (RT) locational marginal prices (LMPs) was $4,159/MWh, while prices during this summer’s peak hour averaged only $25.20/MWh.  The big difference could be attributed to several factors, including adequate surplus capacity at the time of the peak, fewer transmission constraints, and fewer unscheduled plant outages.  Additionally, the availability of more wind and solar power contributed to the low LMPs as the high temperatures across Texas came with windier and sunnier conditions.  Looking closer at this summer’s peak hour compared to last summer’s peak hour, it is apparent that wind and solar resources were more extensive and more consistent power contributors.

An analysis prepared by Hitachi ABB Power Grids’ Velocity Suite research team reveals 45 hours where the system load topped 72 GW so far this summer.  In contrast, there were only 31 hours topping 72 GW during the summer of 2019.  On only one occasion did the average RT LMP price top $1,000/MWh in 2020, while there were eight occasions during the summer of 2019 when average LMP prices in ERCOT topped $1,000/MWh.  The average LMP price during the 72+ GW hours this summer was only $145/MWh, while the average for all 72+ GW hours in 2019 was nearly eight times higher at $1,145/MWh.

Wind and solar on the rise in Texas

To put in perspective how rapidly both wind and solar power have grown in Texas, consider that wind and solar have increased from virtually zero capacity two decades ago to roughly 34 GW today.  Most of this growth (88.7%) has been from wind farm installations.  In 2020, about 1.4 GW of new wind and 1.1 GW of new solar has already been energized through August. 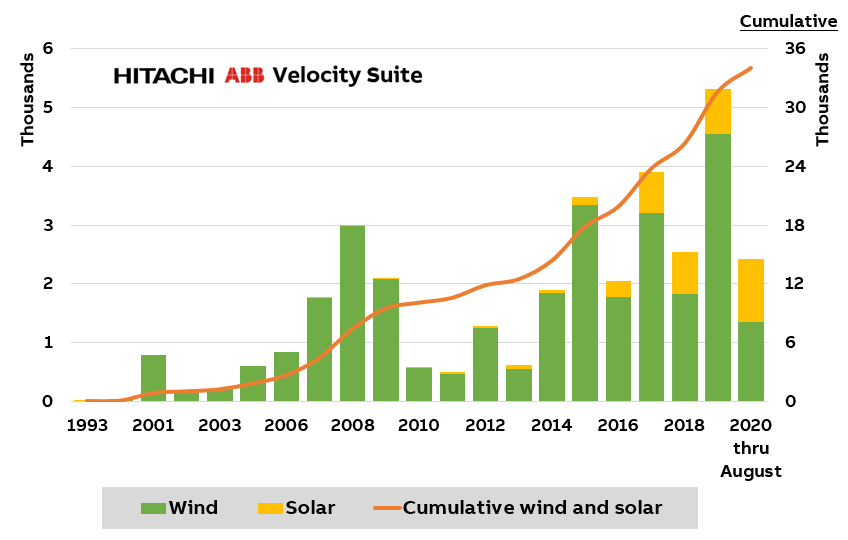 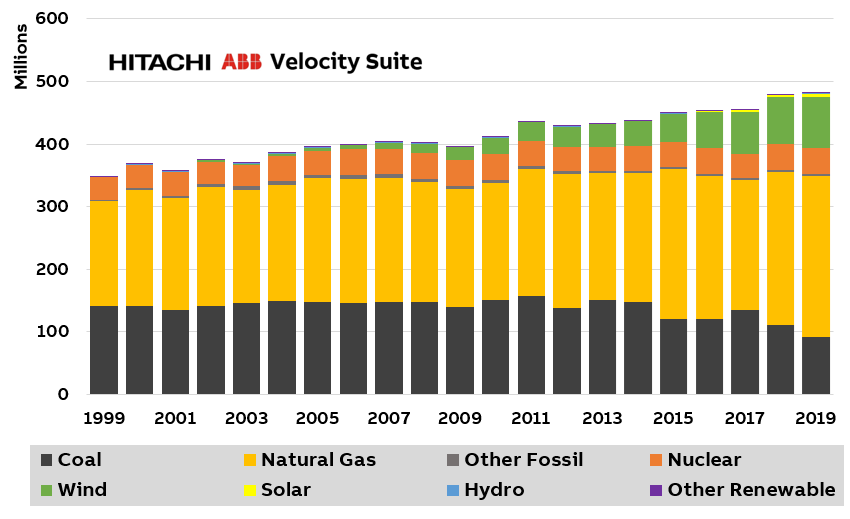 Customers benefit greatly by lower market power prices, but with ERCOT’s “energy-only” market, higher price signals are necessary to support future capacity development.  But even with that backdrop, the rapid and tremendous investment in solar, wind, and battery storage augmented by natural gas generation support an even ‘greener’ future for the Texas grid.

It is difficult to see how North America can build a robust lithium-ion supply chain without having domestic lithium-ion cell fabricators at the core of that chain that have the ability and inclination to purchase goods from other domestic suppliers.