Spanish renewable auctions 2021: Will they push back the PPA market?

Michael studied International Business Studies (B. Sc.) at the Friedrich-Alexander-University Erlangen-Nürnberg and the Universidad de Guadalajara (Mexico) as well as Integrated Natural Resource...

The results of the first auction in January 2021 revealed strike prices on a record-breaking scale for both wind and solar. Will this put pressure on the Spanish PPA market, especially solar PPA prices? Will future cannibalisation effects increase and bring long-term power prices down? In the following, we provide a quick overview of the answers.

The tender schedule foresees annual auctions of around 5 GW RE capacity. But volumes, pot sizes per technology and other preconditions for participation will be revised every year. On January 26th 2021, the first auction of 3 GW was carried out, with 1 GW pots each for solar PV and wind onshore, as well as one technology-neutral pot.

Finally, this resulted in 2 GW successful bids for solar PV (solar pot plus the entire technology-neutral pot). Consequently, the average price was 24.47 EUR/MWh (lowest: 14.98 EUR/MWh; highest 28.9 EUR/MWh), which operators are awarded for 12 years as of the time of commissioning.

The comparatively low auction price level raises the question, what effects this development may have on future power prices in general and on solar PPA prices in particular. Since the latter have been observed at levels of 34 EUR/MWh or higher for a pay-as-produced 10-year tenor.

Risk-return profiles of CfD vs. PPA projects: Why are these prices hardly comparable?

Due to the high visibility of the auction results in public media, technology-specific average bidding prices may be referred to as a price benchmark for PPAs with similar tenors. However, the bidding prices have to be put in the context of the tender design before comparing them to free-market PPA prices.

Hence, the Spanish government acts as an offtaker with extremely low default risk. This reduces the project’s capital costs much more than commercial offtake agreements do (PPAs). This, in turn, allows these CfD-projects to accept lower offtake prices.

Moreover, another design feature affects the risk-return-profile of projects under the CfD scheme. Unlike in many other European markets, awarded projects do not need to sell their entire production to the market under the CfD contract, but only a defined amount. Either residual electricity volumes can be sold to the market as well, in this case these volumes would also be remunerated with the CfD auction price. Or they can be sold to PPA offtakers at a potentially more attractive price. For this reason, the observed auction prices serve as a floor price for (parts of) the output to facilitate project financing. But flexibility is left to operators to exploit the upside potential of a favourable market development. If the CfD scheme covered the entire production, such flexibility would cease.

Hence, for these partial volumes, the Spanish CfD (symmetric) scheme comes closer to the German asymmetric CfD scheme (“EEG Marktprämienmodell”). If the Spanish CfD scheme covered the entire production, such flexibility would cease. Figure 1 provides an overview of this aspect by comparing the risk-return profile of projects participating in German, British and Spanish CfD auctions to PPA projects. 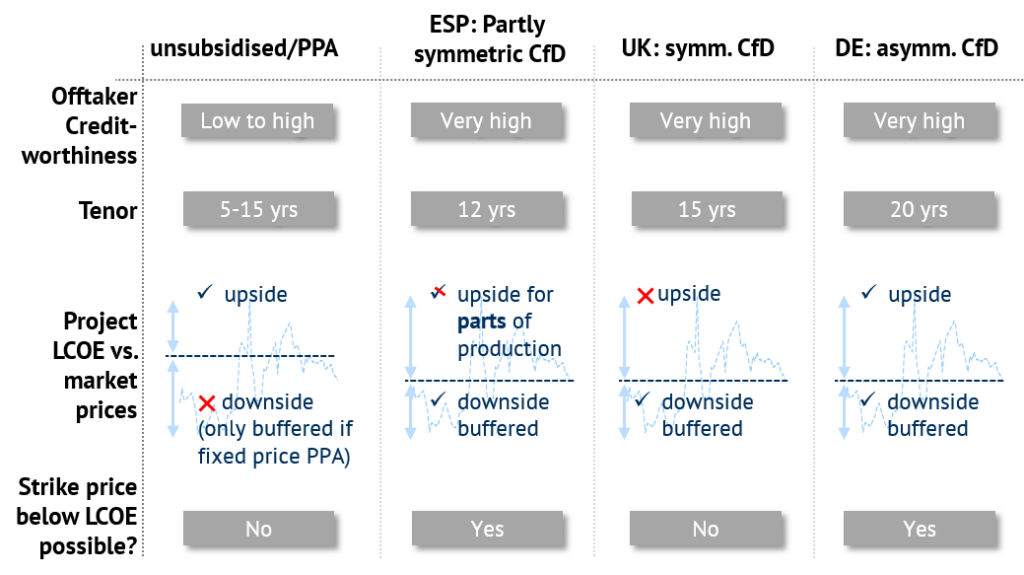 This question refers to a common phenomenon observed in many European power markets: The more solar or wind capacities are added to the market, price cannibalisation effects in times of high RE feed-in will become more pronounced. The same is valid if the structure of the remaining power generators and consumers remains the same.

Do market participants believe in a strong influence of the auction results on base prices? Assuming that most of the auction winners will have their power plants join the market about two or three years from now, price developments of Cal-2024 futures at the Spanish OMIP exchange may serve as an indicator for this.

Figure 1 clearly indicates: Cal-2024 prices remained widely unaffected during the governmental announcement of the auction plans in Dec 20 and the publication of the auction results in Jan 21, respectively. Other fundamental price effects appeared to be of much higher impact.

Examples for such effects are expectations about the future power demand or commodity prices, which may greatly be affected by macroeconomic developments. An overview of the most significant price risks on the Spanish power market will be soon published in this blog. 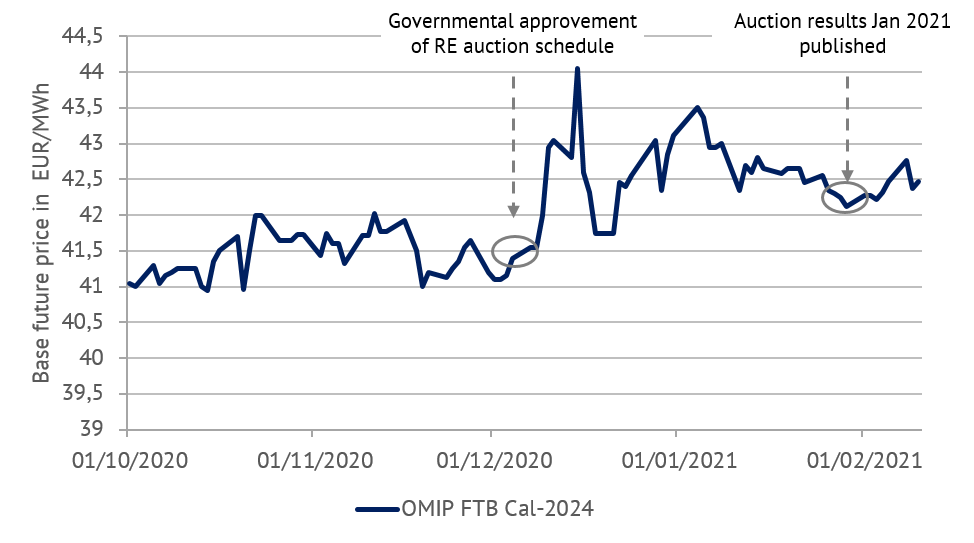 Figure 2: No significant reactions to the new RE auctions by the Spanish future market (OMIP) for Cal-2024 [Source: Own illustration based on Montel News]

What about capture ratios, particularly for solar energy?

Next to base power prices, solar and wind capture ratios (particularly solar) could particularly be affected by future price cannibalisation. Currently, there is no liquidly traded public price index available to check market opinions on capture ratios.

However, Energy Brainpool is currently preparing the expansion of its free-of-charge German PPA price monitor to the Spanish market. Until we get there: What is our view on the auctions’ influence on solar capture ratios the mid-term (to 2025) as well as long-term (to 2030 and beyond)? The answer is quite simple: Since future auction volumes are adapted annually, these auction volumes are expected to complement the less foreseeable, PPA-driven solar expansion in order to secure the achievement of long-term expansion goals laid out in PNIEC 2030 (e.g. 44 GW for solar PV and CSP combined).

As long as this mechanism applies, the Spanish RE auctions would not increase the planned capacity expansion in the long term. Outlooks on future cannibalisation effects resulting from RE expansion should hence already have been adapted at the time the final version of PNIEC 2030 was published by mid-2020.

This question refers to a common phenomenon observed in many European power markets: The more solar or wind capacities are added to the market, price cannibalisation effects in times of high RE feed-in will become more pronounced. The same is valid if the structure of the remaining power generators and consumers remains the same.

Why is this common with renewable capacities but not other forms of generation?

It is common with wind and solar due to their short-run marginal costs (SRMC) of producing electricity of around 0 EUR/MWh. So to say, they push cheaply into the market and crowd out more expensive generators such as coal or gas. In windy and sunny hours, the electricity demand can hence be met by a power plant park producing more cost-efficiently, comparatively expensive generators are not needed.

Thanks Michael . I never knew there was so much involved in the pricing of a PPA. I own a few that are 20 years agreements but these seem to be 10 or 12 years. The prices do change over time but I felt it was because the equipment has dropped in price over time. Thanks for all these FACTS.

I loved the original German Feed In Tariff. It gave real value to clean renewable energy to get that market going with very high returns. We need more value placed for no water use and no pollution.