As the solar industry grows, so does the demand for land. Historically, solar power plants were installed on flat land, even if the land was not originally flat. With the tremendous drop in module and balance-of-system costs, grading has become a key part of the project economics. Gone are the days a site can “just be graded”. Now, developers are focused on eliminating grading, especially as they expand into untraditional areas with more terrain challenges. Solar developers, contractors, and partners are tasked with finding solutions to tackle these less-than-ideal lands, oftentimes at higher associated costs.

When faced with non-flat terrain, solar developers need competitive solutions to meet capacity, production and cost goals. Conventional trackers require site grading to mimic flat-land environments due to the minimal allowable torque tube deflection along the length of the row. While this might seem like a reasonable solution, the cost of civil site work, environmental protections (SWPPP), and permitting often makes grading untenable.

At project sites where grading is not possible, tracker providers are finding ways to modify the equipment to fit to the land. A popular solution is using variable foundation heights to keep the structure aligned. However, this invites both increased structural costs by using longer foundations and installation challenges by forcing workers to install equipment at difficult heights. Another common solution is to reduce the overall length of tables to mitigate any table-to-table terrain challenges. 2P tracker systems were introduced to allow shorter tables, but the added costs of greater wind loading and difficult construction erode the value they could bring. Although these options allow for the land to remain mostly undisturbed; major design modifications, or construction challenges, are still required to accommodate the land. 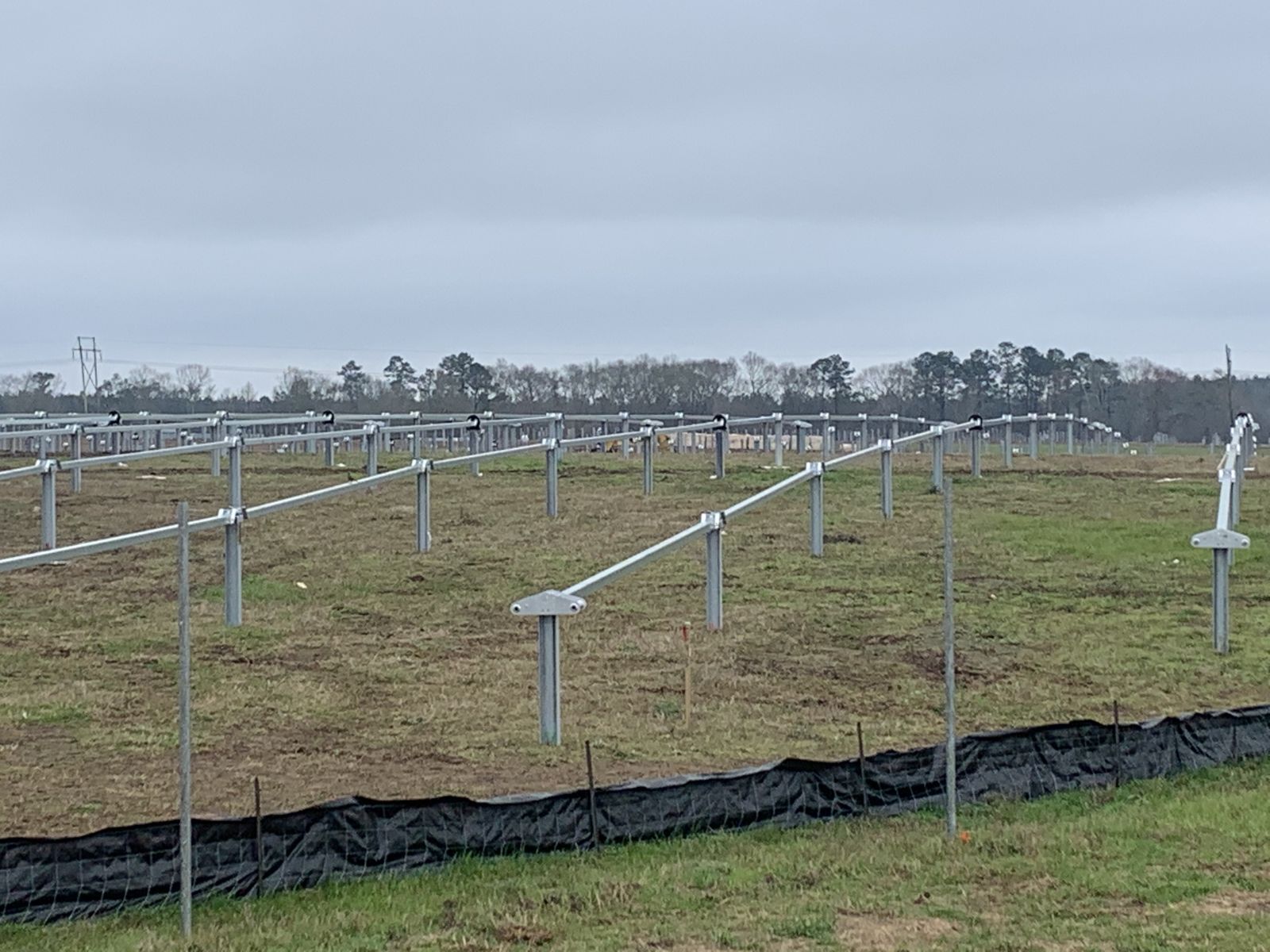 Alternatively, following the natural terrain eliminates many of the previously discussed challenges, but requires a full solution approach with a knowledgeable equipment supplier. Terrain following single axis solar trackers can eliminate, or greatly reduce, the need for grading, and can further increase power generation if designed efficiently. In typical tracking systems, the slope analysis is conducted in the later stages of the projects. When building on variable terrain, slopes drive design considerations, which requires slope analysis efforts to be brought forward in the design cycle. This up-front analysis allows designers to optimize site layouts from a 3D perspective. They can design around “sun-facing” slopes (i.e., on a south-facing slope in the northern hemisphere) to maximize power generation, and analyze the slope change at each foundation to designate appropriate bearings, or other terrain following technology. This is a critical step in making the system adaptable to the terrain and is necessary to accurately select and cost the equipment to build a project.

Designing for non-flat terrain tracker installation requires in-depth analysis of wind loads, advanced software for foundation placement, the ability to adapt to inaccurate topographical analysis, and the ability to react efficiently to flood concerns. Wind is a major design factor for solar structures, and requires terrain-specific analysis to understand how loads may increase or decrease on undulating terrain. Your solar structure supplier must analyze these loads correctly, or the structure may not be sized appropriately. Foundation placement on non-flat terrain requires post-processing of the 3D layout to ensure transition angles across foundations are accounted for correctly. Further, because 3D topographical studies are not 100% accurate, and because the terrain can change during the construction process, low-cost mitigation for unexpected topography must be available to reduce or eliminate the costs of foundation rework. Finally, it is common to encounter flood zones in non-flat terrain, so the tracker must be capable of stowing flat to avoid flooding. Some trackers require large sections to stow flat for flood, while others require only the affected rows to stow flat. It is recommended that a tracker supplier with row-by-row flood control be selected so as not to sacrifice more power generation than is necessary during flood events.

A popular approach for foundation installation is to maintain constant reveal heights and embedment depths. For conventional straight torque tube trackers on non-flat terrain, variable foundation heights are required, increasing costs by 10-20%. However, with terrain following trackers, constant reveal heights can be maintained. Further, because the equipment can be installed at a constant height, labor costs are decreased, as is the potential for injuries from working at elevated heights.

Performance estimation of utility scale photovoltaic power plants on non-flat terrain is in its infancy and is challenging. The common approach is to use industry standard PVsyst software assuming flat terrain.  This assumption simplifies energy loss calculations, but contributes to systemic over-estimation of energy production for sites with terrain that is not actually flat. Further, backtracking algorithms from yesteryear will result in unaccounted loses, as opposed to modern, highly detailed, site-specific backtracking algorithms.

There are multiple factors that can contribute to an incorrect production estimate on non-flat land, the most important of which include the plane of array, the backtracking algorithm used to avoid inter-row shadowing, and consideration of electrical mismatch. Miscalculation of the plane of array irradiation can lead to either over or under-performance depending on the overall aspect of the site.  A backtracking algorithm that is not sufficiently advanced to avoid inter-row shadowing on uneven terrain can dramatically miss production targets. A central inverter site with only a small set of maximum power point trackers modeled on flat terrain will produce optimistic results compared to the reality caused by the dispersion of the plane of array irradiance from average on each individual string. Therefore, it is important to enlist the help of knowledgeable IEs, and equipment providers, when modeling production estimates for non-flat terrain sites.

An additional complication is that not all backtracking algorithms are created equal.  If the algorithm used by a tracker system assumes that the terrain is flat, the trackers will not sufficiently backtrack to avoid inter-row shadowing in all terrain conditions. This becomes even more complicated when the modules along the length of the row can be at different angles from each other. One solution is a forward ray-tracing analysis to eliminate inter-row shadowing caused by uneven terrain. This maximizes the power output of the project by calculating the shadow fall from each square centimeter of the structure and modules, and generating custom row-by-row backtracking to ensure power-robbing shadows do not fall on neighboring rows. This type of analysis requires custom software, and ideally a feedback loop analyzing the power output from each module string, to continuously monitor and optimize the site throughout its operating life.

The solar industry is quickly moving away from the flat land paradigm on which it was developed. Solar trackers are the preferred technology to maximize power output, but conventional tracker structures, controls, and software perform poorly on non-flat terrain. However, new technologies are available to improve the calculation of production estimates, reduce or eliminate grading requirements, speed up design processes, reduce equipment and construction costs, and reduce rework when topography assumptions prove slightly incorrect.

The team at Nevados has spent years developing a full suite of solutions to design solar tracker projects for flat and non-flat terrain. If you have questions on how to take advantage of a great project site that just happens not to be flat, then please reach out to us so we can help you navigate the design and construction process.

Thanks for this article - I was curious what you are seeing in the market as it pertains to solar?  Is there a slow down?  And if so do you think this is attributed to supply chain issues?  Also, do you think the infrastructure bill, once they start distributing funds, will help the solar industry?