Solar Rooftops on Warehouses: A Path for Rapid Decarbonization Energy transition strategies include vast substitution of fossil-based resources, especially coal plants, with solar- or wind resources. With prices dropping for solar technologies and increasing sophistication, it is the more popular choice with capacities that can be considered for sizes ranging from residential rooftops, commercial office roof space to large vacated farmlands. The recent pandemic has accelerated e-commerce purchasing, requiring businesses to stock supplies in warehouses. Huge warehouses are sprouting up like mushrooms along local highways, on country roads and in farm fields. The boom is being driven, in large part, by the astonishing growth of e-commerce retailer’s proximity to large urban centers[1]. Some states have already mandated that warehouses be solar ready: California and New Jersey are prominent examples[2]. It is estimated that warehouse rooftop space availability in the U.S. is equivalent to 40 GW solar capacity, slightly less than 5% of the nation’s total capacity, but nearly 20% of the coal plants it could replace. This paper lays out the case for considering large scale integration of solar on the grid by considering warehouse roofs as important resources.

Decarbonization The integration of more renewable energy into the nation’s generation mix is desirable to combat the effects of climate change and reduce the carbon emissions associated with electricity production. On-site solar assets are also attractive for companies working to reduce their environmental impact and satisfy stakeholders. However, some companies still seem reluctant to make the investment. Warehouse roofs are an ideal location for solar panels in many ways: they are generally flat, allowing more sophisticated systems to track the sun throughout the day to maximize electricity production[3]. Additionally, warehouses have a lot of square footage, providing a lot of surface area on the roof to install a system of significant size to support energy consumption in the building. Given their height off the ground, warehouse roofs are not subject to shading from nearby trees or buildings, again increasing the amount of sunlight the panels can be exposed to, as well as the amount of electricity produced. In addition, solar assets located on rooftops are non-visually disruptive. They also take advantage of land area that is already being utilized for a building, which is preferable in many ways to building a ground-mounted array on land that could be used for other purposes.

The usefulness of warehouse roofs in particular as a location for onsite distributed energy resources has already been recognized. New Jersey law requires any newly constructed warehouse with a planned area of 100,000 square feet or greater to be designed in a way that would allow for the future installation of solar panels on the roof. Forty percent of the area on the rooftops is required to be reserved for solar panels, and the warehouse must be constructed in such a way to allow for solar thermal systems to be installed. Legislation such as this emphasizes the desirability of rooftop solar assets on warehouses and is critical for states that aim to increase the degree of renewable energy production in their generation mix.

For the purposes of this paper, the authors focused on Pennsylvania for its proximity to major urban centers for distribution of goods.  For consistency and ease of analysis, 96 warehouses and distribution centers were used as the focus of this portion of the analysis[4]. This source concisely summarizes critical details for all 96 warehouses, including the tenant, owner, address, area (square footage), and primary use of the warehouse.

All pertinent information for the warehouses in the target area was entered into Excel to perform various analyses. Based on the description provided in the article, warehouses were identified as being “refrigerated” or “non-refrigerated” for the purpose of more accurately estimating energy use later on. In addition to the analyses performed in Excel, the location for each warehouse was mapped in ArcGIS to understand their general distribution. The next step in this analysis was to build a “business-as-usual” energy consumption profile for warehouses. Given that data for average energy consumption for warehouses can be difficult to find, a study from Energy Star was used as a benchmark. Using the EUI estimates provided by Energy Star, it was then possible to estimate the average yearly consumption of the warehouses. While the structural integrity of typical warehouse roofs to determine if they are capable of supporting the added load of solar panels is vitally important, this paper assumes that many, lighter-weight roofs, especially those that do not need extensive heating or cooling may need further refurbishment to accommodate solar panels on the roof. 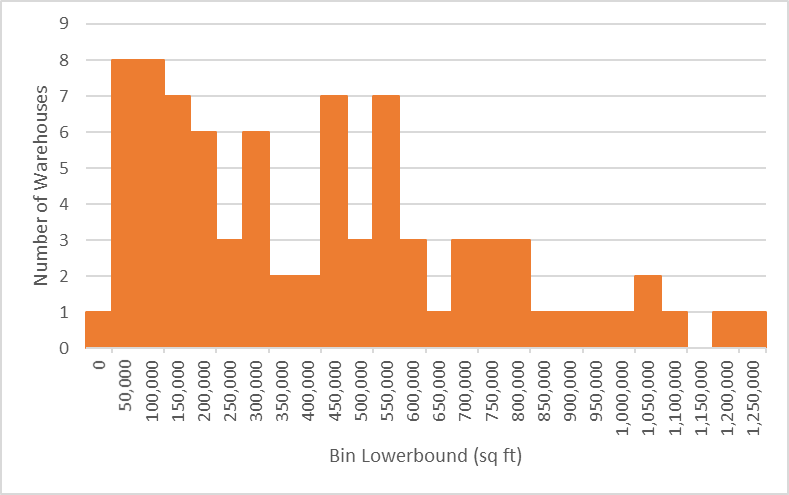 The map of warehouses in the target area is included below as Figure 2. In addition, warehouses in the same industrial park often have the same owner, which may make it easier for tenants to apply pressure on the owners to allow the installation of rooftop solar assets. Eleven of the ninety-six warehouses investigated are owned by a company notable for their commitment to integrating ESG practices across their business, highlighting that they have installed 252 megawatts of solar energy[5].

Figure 2 Locations of warehouses in the target area (4)

A preliminary analysis was necessary to find the added load on the warehouse roofs due to the solar panels. When conducting this analysis, the dead load, which is the load of the solar system itself, in addition to live loads must be calculated. First, the load of a panel itself must be evaluated. Commercial solar panels have an average length of 78 inches and a width of 39 inches. The weight of the panel depends on the manufacturer, as well as the size of the panel; however, most panels fall around a weight of 40 lbs. Using a calculated area of 21 square feet, based on the average size of commercial panels, and the average weight of the panel, the load is approximately 1.89 lbs/ft2. This value assumes that panels will be placed very close together, so it is rather unrealistic, in addition to the fact that it neglects the racking equipment. In reality, the load of the panels themselves and the racking system is likely between 3 and 6 lbs/ft2, depending on the mounting method used.

It is again important to emphasize that these calculations must be carried out on a case-by-case basis, but the framework for completing these calculations to gain an initial understanding of the structural requirements is included.

Return on Investment A key component of the attractiveness of rooftop solar assets lies in the payoff. In order to incentivize private investment in renewable energy, the federal government, as well as some states, offer tax incentives for such investments. Some states, unfortunately, will (or already have) terminate(d) any tax incentives offered for investment in solar; no production tax credit, investment tax credit, property tax exemption, or sales tax exemption exists. Given these findings, only the federal investment tax credit is available for projects in the state. The Federal Business Energy Investment Tax Credit (ITC) offers a twenty-six percent tax credit on the cost of installing a solar system. The value of the ITC will step down in consecutive years, so projects beginning construction in 2023 will only be eligible for a 22%t ITC.

Using weather data from Harrisburg, Pennsylvania, the approximate yearly output of a 3- megawatt array can be expected to generate 3.832 gigawatt-hours of electricity yearly, if oriented at a 20 O tilt and 180 O azimuth when roof-mounted. This is less than even the yearly energy consumption of non-refrigerated warehouses, so even with variations in production, it can be expected that a rooftop asset will not offset all of the demand from the warehouse. It is also important to consider the limitations for size of the asset based on the roof area. This research, as well as a more detailed analysis of annual production for a rooftop solar system, will be addressed in future research.

Conclusions and Future work Based on preliminary findings of this study, warehouses are good candidates for rooftop solar arrays. Assessments were made for a collection of warehouses in a high density corridor in central Pennsylvania. Warehouses offer an ideal location for rooftop solar, and also happen to be abundant in Pennsylvania due to the state’s network of highways providing access to major East coast population centers, as well as the affordable real estate. They have significant annual energy consumption, so the impact of offsetting some grid-supplied electricity with solar panels would have a positive environmental impact. Several of the key metrics necessary for making the decision as to whether to pursue such a project are building dependent, such as the added load of the solar system, the size of the array, the primary use of the warehouse, and the energy consumption patterns for the building.

Using the findings of this generalized study as a reference, more granular economic models will be created using the System Advisory Model from NREL. These models will include sensitivity analyses for a range of factors addressed in this study, such as square footage, annual energy consumption, and array size. While the initial findings have been promising, these more detailed models will be essential to give interested parties a more holistic understanding of the potential electricity savings and associated costs for a rooftop solar array.

The use of solar technology to supplant fossil-based fuels to generate electricity requires an inordinate amount of “real-estate” to match the replaced capacity. Warehouse rooftop offer the space, and to some extent the unimpeded access to solar energy to achieve climate-change goals.

[3]  “Understanding the Cost of Installing Solar Panels on a Warehouse.” Prologis, 13 July 2021, https://www.prologis.com/what-we-do/resources/cost-of-installing-solar-p....

Warehouse rooftop offer the space, and to some extent the unimpeded access to solar energy to achieve climate-change goals.

What's been the most challenging roadblock to overcome-- is it just overcoming the sticker price of initial investment?

Matt, Solar on a warehouse rooftop has emerged as fortunate stroke of serendipity. Warehouse construction has skyrocketed especially during the pandemic. However, warehouses come in different flavors, but broadly as “refrigerated” and “non refrigerated”. The former are more likely candidates for rooftop Solar since they may possess the necessary structural strength to withstand the additional load and the required wind (and snow) load.  The other category of warehouses may be candidates for lighter weight solar. This would of course need further research and is not a “slam dunk”. It is the potential availability of rooftops on warehouses that is attractive: the full potential could equal 20% of the entire fossil fleet. The other advantages are  capability of integrating with large scale storage to defer/smooth grid demand.