Agriculture is a vital part of North Carolina’s economy. There are 52,000 farms in the state, encompassing 27 percent of our land area. But now, there’s a new crop: Solar electricity generation. North Carolina ranks third in the nation in installed solar generation.

Utility scale solar can be contentious in political circles, but rural residents have found benefits without downsides. A recent North Carolina news piece featured a family who has farmed the same land for five generations. When first approached by a solar developer in 2013, they scoffed at the idea of leasing some of their acreage for solar. But farming is a challenging  venture that grows increasingly difficult: The family’s crops had failed three out of the previous six seasons. The family decided to research the subject. They continue to farm, but they have diversified their income with a utility-scale solar lease and by operating a business mowing solar fields.Solar is a perfect fit for farmers, as adding solar leasing of unimproved or unused land provides them stable new income..

Why is Solar Good for Rural Communities? New Income, New Tax Base

By definition, solar arrays are developed on land that is not economical for other purposes. Solar lease payments to property owners may range from $250 to $2,000 per acre, per year, depending on energy infrastructure in the area. Solar hosts may also benefit from reduced electricity costs and other perks from their electric utility. Some farmers choose to lease degraded land which would otherwise sit fallow while nutrients and fertility are restored. Others may utilize solar to innovate their planting and extend growing seasons; panels can provide shade for heat- and sun-sensitive plants, or offer opportunities for new shade-resistant crop markets.

How Does Solar Impact Agricultural Lands?

So, why are people still hesitant about solar? Industry opponents of renewables promote a lot of misinformation. A key myth suggests permanent land damage and lost farming potential. Evidence suggests the contrary–in an installation’s 20- to 25-year lifespan, solar can actually enhance soil quality, contribute to biodiversity, and bolster future production. This is particularly true if a farmer grows vegetables, soil-retentive vegetation, or pollinator-friendly native species under the panels.

Others worry that solar installations have too large of a footprint, and that they will take up too much cropland. On the contrary, only 0.19 percent of North Carolina cropland (9,000 acres) has been repurposed for utility-scale solar. For comparison, in recent years more than 1,000,000 agricultural acres were lost to housing and other developments. Even if solar provided more than five percent of North Carolina’s electricity, it would occupy less than 0.06 percent of the state’s agricultural land. Any additional concerns about environmental impacts, however minimal, are clearly defined and accounted for in a landowner’s contract with their solar developer. Decommissioning plans and budgets are a standard part of project development and leasing agreements. Overall, solar is a boon to the environment–it provides clean, climate-friendly renewable energy.

What Happens at the End of a Solar Lease?

Nevertheless, many fossil fuel and monopoly-backed politicians seek to slow solar progress. 2019 saw a North Carolina state bill  proposing total prior securitization for proposed solar facilities. Though marketed as an effort toward “responsible” decommissioning, the requirement to set aside funding up front would have been cost prohibitive for solar development. This bill was ultimately replaced with a year-long stakeholder process and decommissioning study led by the NC Department of Environmental Quality that concluded early this year. The resulting report

The study provided suggestions to standardize future investment in sustainable decommissioning, but did not mandate adopting any particular rules or regulations. This leaves counties on their own to create individual, differentiated standards–some of which may be inadequate or unsustainable. It is important to have a template that gives counties a solar development baseline. The North Carolina Clean Energy Technology Center developed a model ordinance in 2016 which was intended for this purpose. This document needs an update for current technologies. We encourage statewide alignment on this planning to determine the best path for future solar growth.

Diane, what's your source for this evidence?

All of my sources are linked in the attached text in the article.

There are no links associated with those claims, and I don't have time to hunt them down. Providing sources for your information is up to you, not your readers.

No need to get testy. There are several here's one -

Your source says there is no evidence:

"In a risk-averse industry, this is perceived as a risky practice because there haven't been any studies and there isn't any data to say that this works or that there can be benefits to the solar project," said Macknick. "That's why we are doing the first systematic and robust research on low-impact solar development—to see what works and to quantify costs and benefits."

I come from a farming family, and your premise (I'm assuming it's yours) is entirely counterfactual with my experience, and that of my father, and his.

Photosynthesis - how plants grow and produce corn, wheat germ, alfalfa, tomatoes, grapes, and hundreds of other agricultural products, converts energy from sunlight to chemical energy. Agriculture is not like shade grass, or house plants. Farm products need sunlight, and lots of it. They won't grow under solar panels - period. In shade, they wither and die. Solar panels make working with combines and other large farm implements impossible; with smaller implements, they make tending fields expensive.

So solar energy can be used to generate electricity, or it can be used to make food, but it can't do both. So when I read that it can, it sounds more like another excuse for the exorbitant land use of "renewable" energy - especially when personal opinion is miscast as "evidence".

"Studies have shown that these temperature differences cancel out and that mean daily crop temperatures were similar under modules compared to full sun crops and there was no impact on crop growth rates. Modules can provide farmers the ability to grow shade-tolerant crops and to diversify crop selection, while also extending growing seasons and reducing water requirements. One study found that shading from solar modules produced lettuce crop weight equal to or greater than lettuce grown in full sun."

DOE source with studies. I disagree with your conclusions.

Thanks for sharing, Diane!

Diane, have you read any of these studies, or are we simply accepting their interpretation by some DOE staffer with obvious confirmation bias as gospel truth?

First of all, there's only one study, Productivity and radiation use efficiency of lettuces grown in the partial shade of photovoltaic panels, and it only measures the ability to grow lettuce - a crop with zero food value and high water content. It never claims temperature differences "cancel out" or that "there was no impact on growth rates" - In fact, it makes a powerful case for the opposite:

This is stuff every farmer knows from hard experience. Photosynthesis enables the production of crops with real food value, that people eat to survive (lettuce isn't one of them). It requires sunlight to grow those plants.

I had to laugh when I read what some staffer at NREL was calling a "farm". So there's no confusion of terminology, this is a garden: 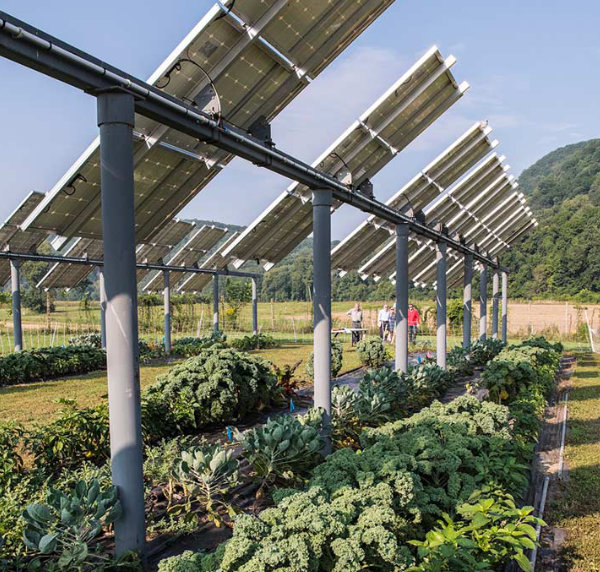 This is a farm: 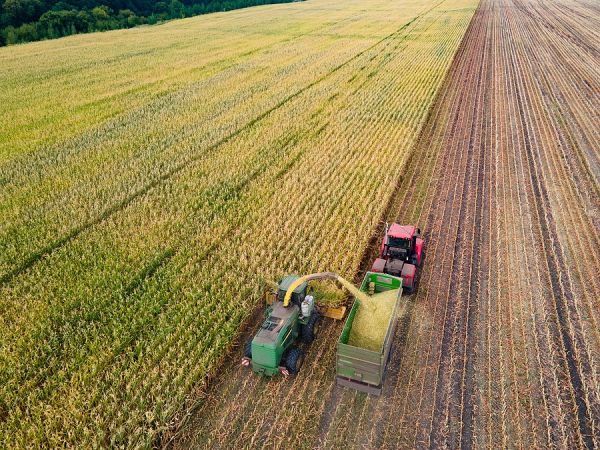 Never in NREL's wildest dreams would it be profitable to grow one acre of lettuce (much less corn, much less 1,000 acres) while manicuring with pruning shears around rows of solar panels. It just doesn't happen, and there's a reason why.