The Rise of Agri-PV: From Niche Idea to Megatrend Toby Couture is Founder and Director of E3 Analytics, an independent renewable energy consultancy based in the Berlin area. He has over 15 years of experience working in the clean energy sector...

Agri-PV (or agrivoltaics) has emerged as a major trend in the solar industry and is poised to redefine the way solar PV projects are procured, designed, and built in many countries around the world. The Agri-PV sector has grown from 5MW in 2012 to over 14.000MW today, and momentum is expanding rapidly.

Israel has recently launched an auction specifically for Agri-PV, as has India, including a recent auction targeting Agri-PV on government-owned land in the regions of Jammu and Kashmir. Similarly, a 700MW Agri-PV project has come online in the Gobi desert in China, currently the world’s largest, and several smaller-scale projects are now emerging across the U.S. A flagship project in Boulder County in Colorado is now producing 40 different types of crops under the partial shade of solar panels, including blackberries, tomatoes, and kale. Research centers are starting to emerge across the U.S. to look at which crops can be grown best under solar panels.

In many cases, Agri-PV works by using bi-facial panels that let some of the sunlight through, although projects have been developed using mono-facial panels as well.

As experience with Agri-PV projects grows, it is exiting the pilot phase and entering full-scale commercialization: the annual “Intersolar” conference has made Agri-PV a major focus of this year’s fair in Munich, and the topic even made it into the German government’s latest renewable energy policy proposals.

Those who’ve been following or working in the Agri-PV sector may wonder why it took so long, as the advantages are increasingly clear:

Despite these various benefits, Agri-PV faces a few challenges: mounting PV systems higher typically increases solar PV project costs. For instance, the project in Colorado mentioned above has configured two-thirds of the panels to be mounted at 6 feet (1.85m) with the remaining third set at 8 feet (2.40m); such taller mounting structures naturally lead to higher costs.

Also, as more people and equipment share the space, electrical conductors need to be properly buried and protected, requiring changes in the way PV projects are designed.

And finally, Agri-PV makes it difficult to use the same large machinery commonly used in many agricultural operations. Transitioning to Agri-PV is therefore about more than simply adding solar to existing farms: it can entail a number of changes to the way farms themselves are planned and managed.

And yet, as concerns over food and water scarcity continue to grow, and awareness of the benefits related to water conservation, crop diversification, and improved land-use continue to spread, Agri-PV is poised to boom. And not a moment too soon.

I know for major solar developments, there are sometimes local community challenges to them. Have you seen such issues specifically tied to agri-voltaics?

Hi Matt - my sense is that this has not been a big issue so far for Agri-PV. And that this may actually be one way to avoid land-use conflicts, and improve community support. We'll get a better sense on this as the sector gains momentum -

Great post and yes this will be the new way of solar fields also in The Netherlands. Also local storage of the generated energy in batteries or hydrogen is part of this new trend and legislation. Concerning Matt's question about the local community challenges and part of the legislation and permits we see that project developers create a better and faster support base using tools for stakeholder engagement. See for an example the picture below. These solutions can be used all over the world and helps accelerating the necessary growth we all need towards renewable energy. 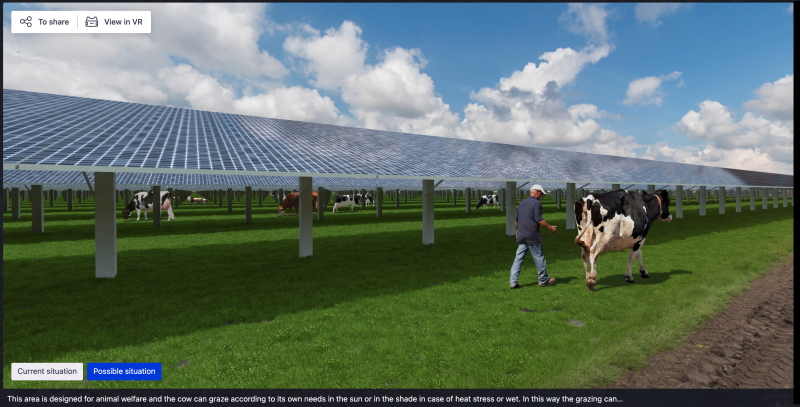 Excellent Ronald! Thanks for sharing - that's a great pic!