Renewables in the South and the North: Portugal and Denmark compared

After comparing the major European countries, this post is about two smaller ones: Portugal and Denmark. Both are pioneers in renewable energy. However, Denmark outperforms the larger Portugal where natural gas still plays a significant role, as a look at the figures shows. Both countries have ambitious energy and climate targets for 2030.

Energy consumption per capita in Denmark has long been higher than in Portugal. Not only the colder climate but also Denmark’s higher economic output plays a role here. Over the past ten years, however, the two have been converging as the Danish consumption declined.

Energy consumption down and greener

In Denmark, the switch to wind energy in the electricity sector played a particularly important role here, greatly reducing coal consumption and thus overall energy consumption. Portugal’s population number with around ten million people is about 40 per cent higher compared to its Danish counterpart.

A look at the shares of energy sources that play a role in Portugal and Denmark demonstrates that the energy mix of the two countries is very similar (Figure 2). Oil consumption accounts for the largest share with 44 per cent in each case, while the next largest energy source are already renewable energies: In Portugal, they have a share of 29 per cent, in Denmark even 34 per cent. Differences arise above all with regard to the use of natural gas. This energy source still contributes just under a quarter to Portugal’s supply, but only 14 per cent in Denmark (source: Our Word in Data).

In terms of the use of coal, however, Denmark with six per cent is still using more than Portugal with three per cent. Moreover, the last two Portuguese coal-fired power plants were taken offline in early and late 2021 (source: energymonitor). The use of nuclear power does not play a role in either country. 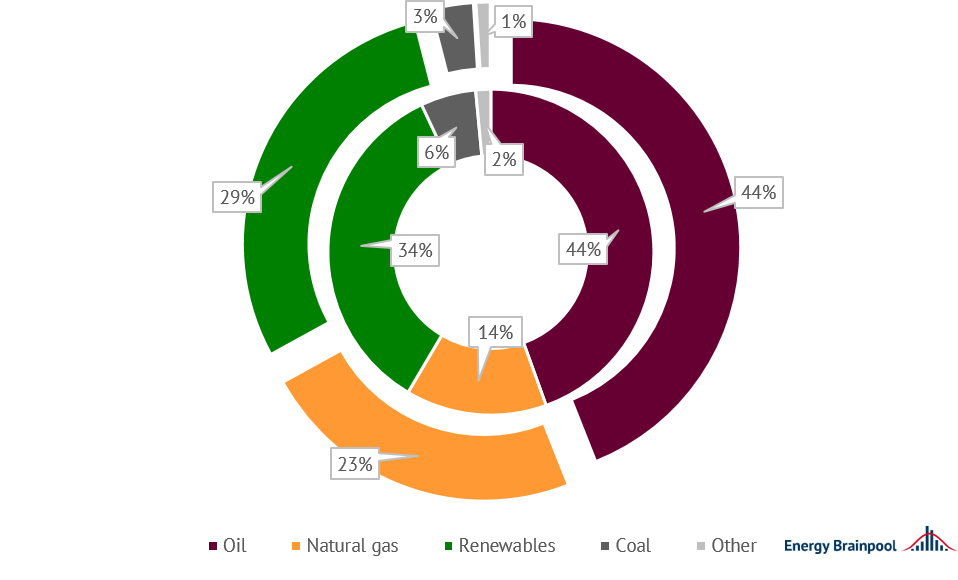 Emissions on the decline

In Denmark, the main factor was the phase-out of coal generation and the move into wind energy. In 2020, despite a sharp decline in recent decades, per capita CO2 emissions in Denmark were 4.5 metric tons, still higher than the 4 metric tons emitted by the Portuguese.

In both countries, renewables account for over 70 per cent of installed capacity. The power plant fleet in Portugal had an installed capacity of nearly 22 GW in 2021, while Denmark has only half the power generation capacity of 11 GW. In Denmark, wind power dominates with over 50 per cent, while other types of power plants only have capacities in the range of 1 to 2 GW.

In Portugal, hydropower accounts for one-third of capacity, with wind and other renewables another third. However, with 5 GW of natural gas capacity, thermal power plants still play a major role in the electricity sector. Figure 3 compares the power plant fleet of the two countries (source: ENTSO-E, ens, APREN). 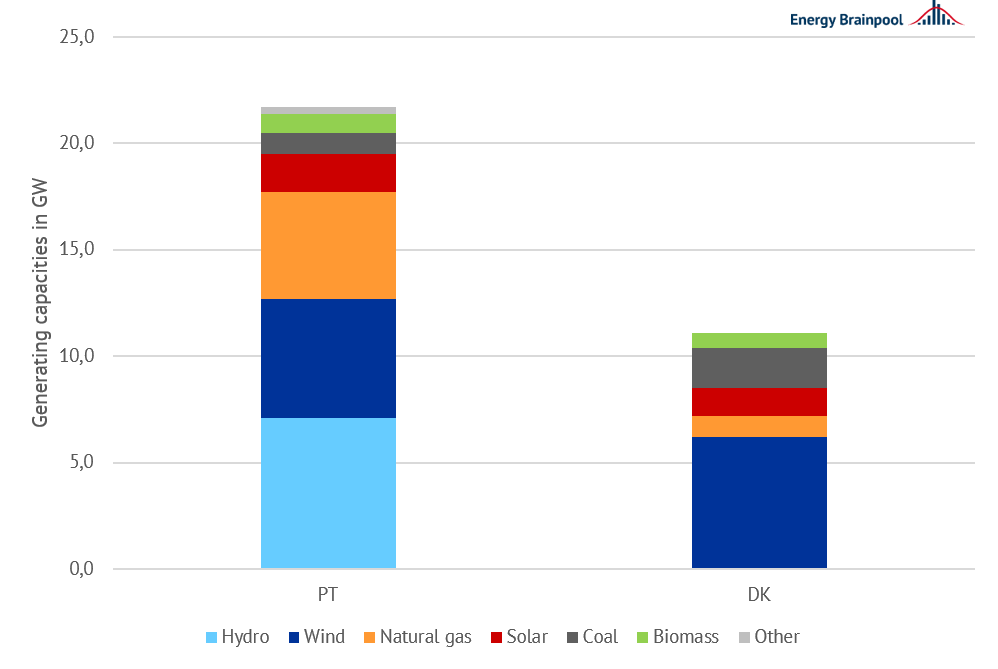 Portugal generated 49 TWh of electricity last year, Denmark only 32 TWh. The high shares of renewables in installed capacity are also reflected in electricity generation. Renewables accounted for 63 per cent of this in Portugal and as much as 78 per cent in Denmark.

However, the largest single energy source in Portugal’s electricity mix was natural gas, which accounted for nearly 16 TWh, or one-third of generation. Half of the electricity produced in Denmark in 2021 came from wind power, a quarter from biomass, while coal, gas, and solar played only a minor role. Imports covered just under 15 per cent of Denmark’s gross electricity consumption of 37 TWh. 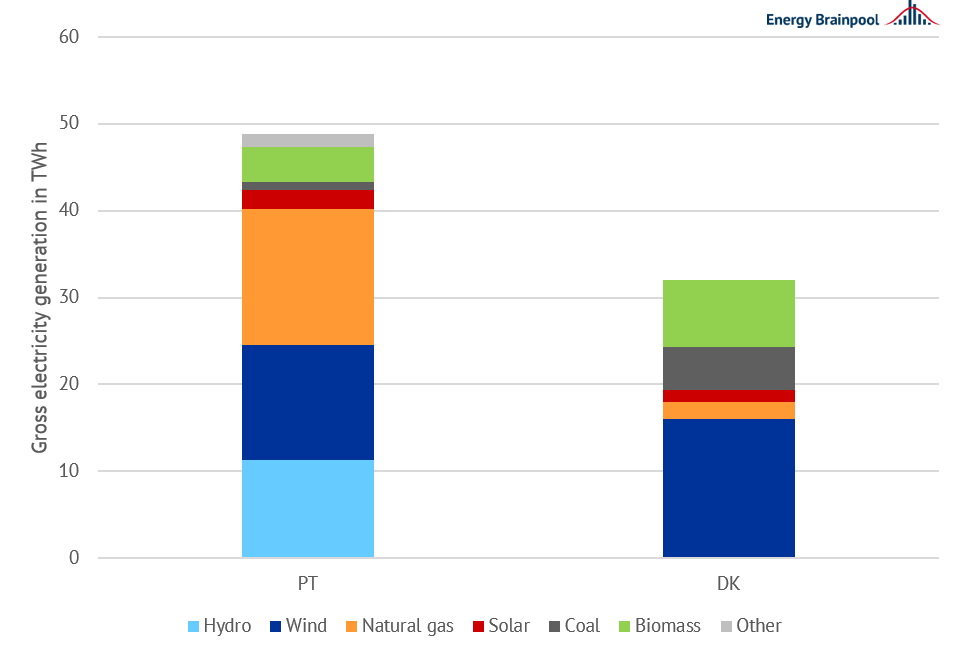 Portugal’s target for 2030 is 80 per cent renewables in the electricity mix. In 2035, the power sector should be completely decarbonised. Investments in the past two years have gone in particular to the expansion of photovoltaics, which the sunny country has not yet greatly expanded (source: energymonitor).

Tenders for PV in Portugal have increasingly resulted in very low subsidy rates in recent years, and there is great interest in PPAs with solar plants in Portugal (source: PV Magazine). By 2030, PV power plants are expected to have reached a capacity of at least 9 GW and could cover about 20 per cent of today’s electricity consumption.

Denmark’s 2030 energy and climate targets are ambitious. A 70 per cent reduction in greenhouse gas emissions compared to 1990 is targeted. At the same time, renewable energies are to account for all electricity generation in the country by 2027. Coal is to be phased out also from heat generation by 2030.

The production of green hydrogen will be strongly promoted in this decade, and between four and six GW of electrolyser, capacity is to be built (source: Recharge). Denmark’s plans are also relevant to offshore wind generation: Several energy hubs are to be installed in Danish North Sea waters with up to 12 GW of generation capacity (source: Offshorewind).

Both countries have made great progress in the development of renewable energy and the reduction of greenhouse gases over the past twenty years. The transformation of Portugal’s and Denmark’s energy systems is entering a new phase in this decade and will lead to a strong expansion of solar projects on the Iberian Peninsula and wind projects especially off the coasts of Denmark.