Renewable energy and grid expansion – tied at the hip across America Investment in the nation’s power grid has been necessary to enable the recent high wind and solar capacity growth across the United States.  Today, there is widespread support for modernizing and growing transmission and distribution systems.  For more than a year, the Federal Energy Regulatory Commission (FERC) has been studying the merits of revising the current electric transmission incentives policy to make transmission development even more attractive to investors.  As a result, there are a tremendous number of renewable enabling transmission projects in power market interconnection queues waiting for approval.  The hope is that these projects will become a reality with federal, state, local, and corporate support.  In addition, meeting the ambitious carbon reduction goals, including the recently announced federal mandate to produce 100% of the country’s electricity from carbon-free resources by 2035, depends on a reliable modern grid.

Moving renewable electricity from resource-rich rural areas to urban demand centers involves an expansive sophisticated web of high-voltage power lines, many that were built years ago to move power from large baseload power plants to urban areas.  The combination of optimizing existing transmission with newly added infrastructure has enabled the rapid growth in wind and solar resources in several areas of the country, including the windy central plains states, Texas, and solar-rich areas like California, the southwest, and the southeastern United States.

The data supports the effort

According to data compiled by the Hitachi ABB Power Grids’ Velocity Suite research team, since 2010, the cumulative transmission and distribution (T&D) annual plant in-service additions by the nation’s major utilities has been a robust $470 billion.  The team derived the statistics from filings made by the largest electric holding companies in America.  Electric plant in-service additions include the original cost of new infrastructure added during the year, making it a great indicator of company investment in the electric grid. 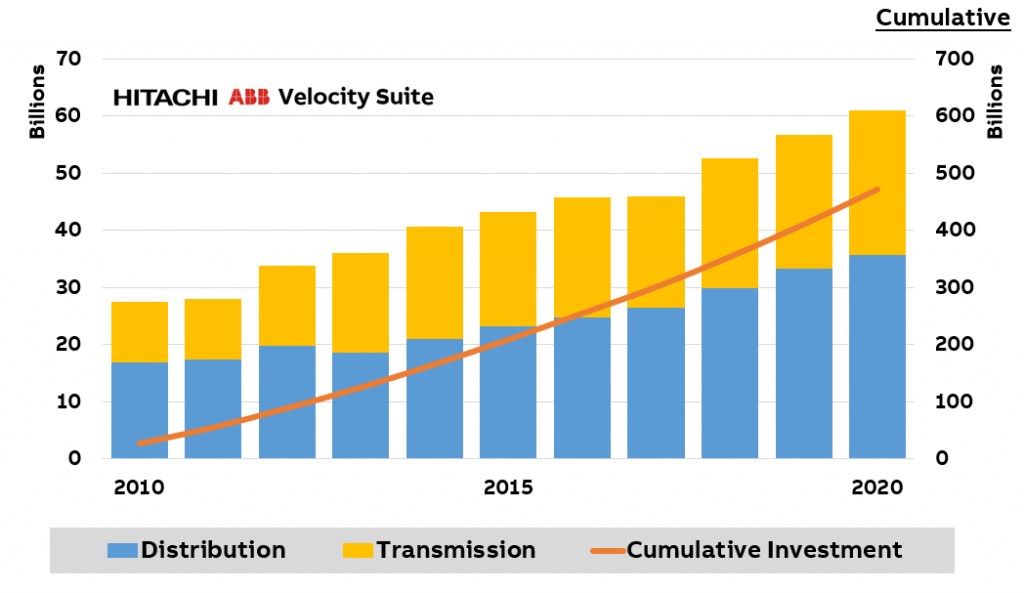 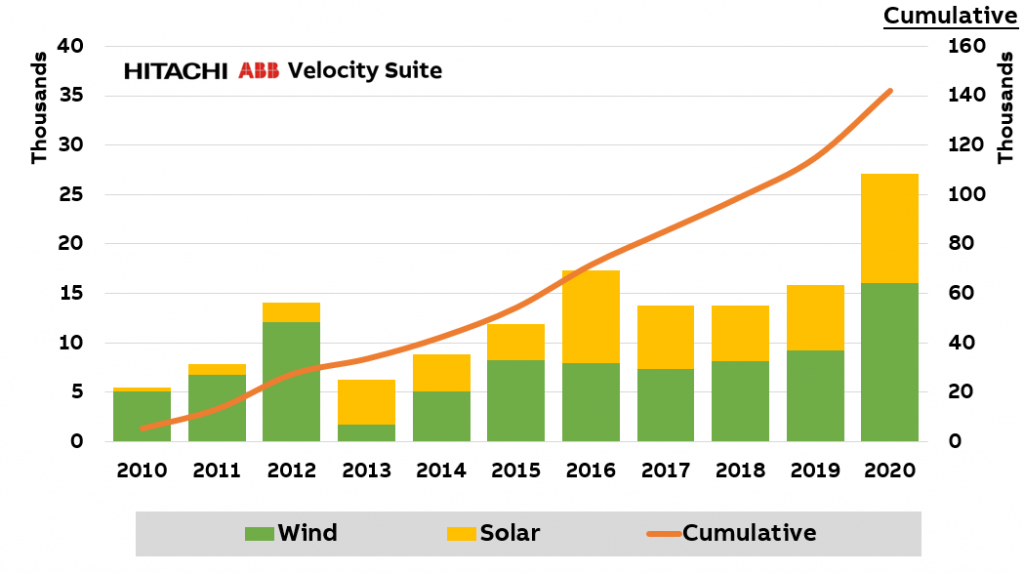 The four organized markets with the highest build-out include the renewable resource-rich Electric Reliability Council of Texas (ERCOT), the Southwest Power Pool (SPP), the Midcontinent Independent Service Operator (MISO), and the California ISO (CAISO), all large wind resource areas, except for California, where solar rules supreme. 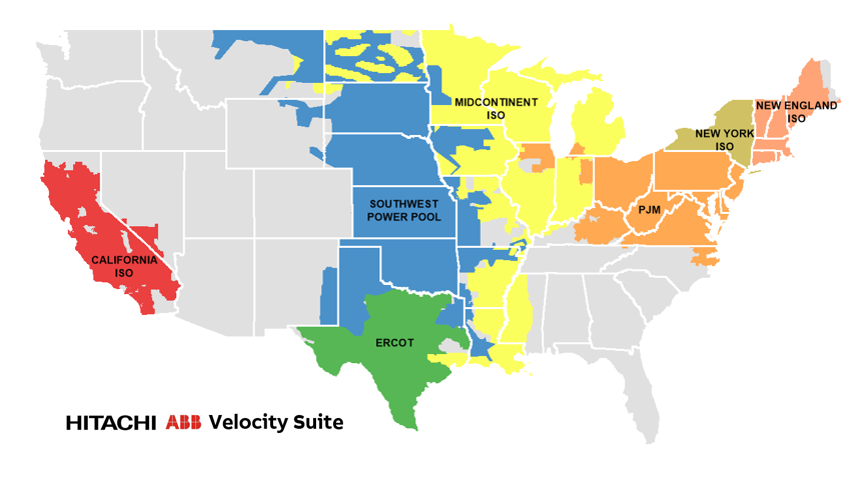 Outside of California, the most recent solar development has occurred in the unorganized regions of the west, southwest, and the southeast U.S. The leading wind and natural gas generating state, Texas, is on a fast track to becoming a supersized solar generator like California.  Today, nearly all future development is expected to come from wind, solar, and natural gas. 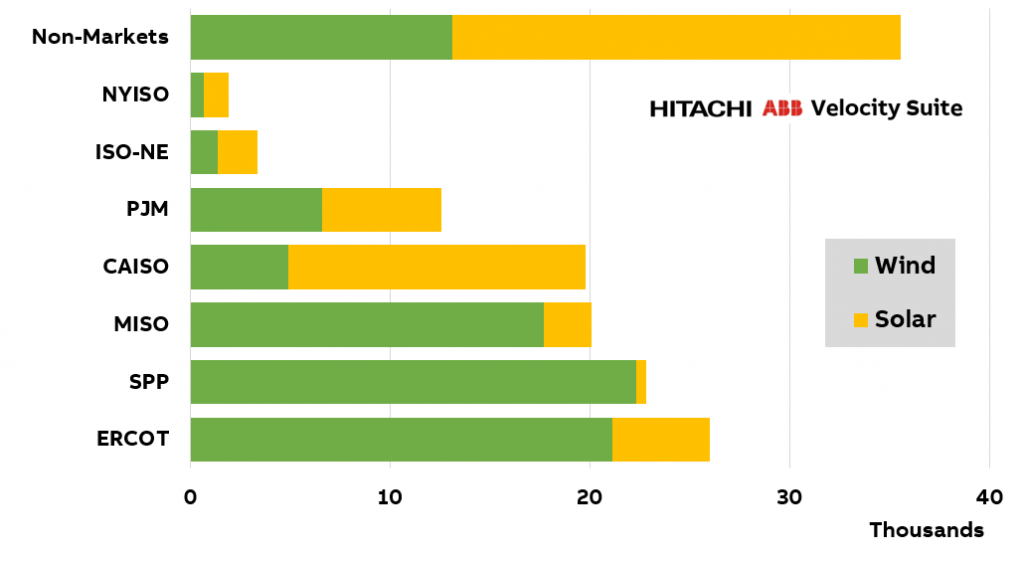 Large grid expansion projects in the central and western states have driven some of the largest buildouts in wind power.  One of these efforts stands out in terms of size and scope.

The Texas Competitive Renewable Energy Zone (CREZ) initiative serves as a classic example of how massive grid projects can become a reality.  The CREZ initiative was born in 2005 when the state passed legislation that established a ‘necessity for new service’ process, that by previous state law, allowed all ratepayers to share in the benefits.  A single agency ran the siting oversight, the Public Utility Commission of Texas.  To support the new policy and laws, local landowners and governments also cooperated and supported the effort. The underlying driver behind the legislation was to connect wind resource-rich areas located in west Texas and the Texas Panhandle with the highly populated urban areas in the central and eastern part of the state.

The CREZ build-out resulted in more than 3,500 miles of new 345-kV high-voltage power lines across the state – enough to transmit up to 18.5 GW of electricity.  The project was approved and started construction in 2008 and completed, in a relatively rapid 5-year window, in 2013.  The total cost was roughly $7 billion.  Since then, operating wind capacity across Texas has nearly tripled, growing at an average annual growth rate of 13.6%, from 11.7 GW at the end of 2012, to 32.5 GW today. 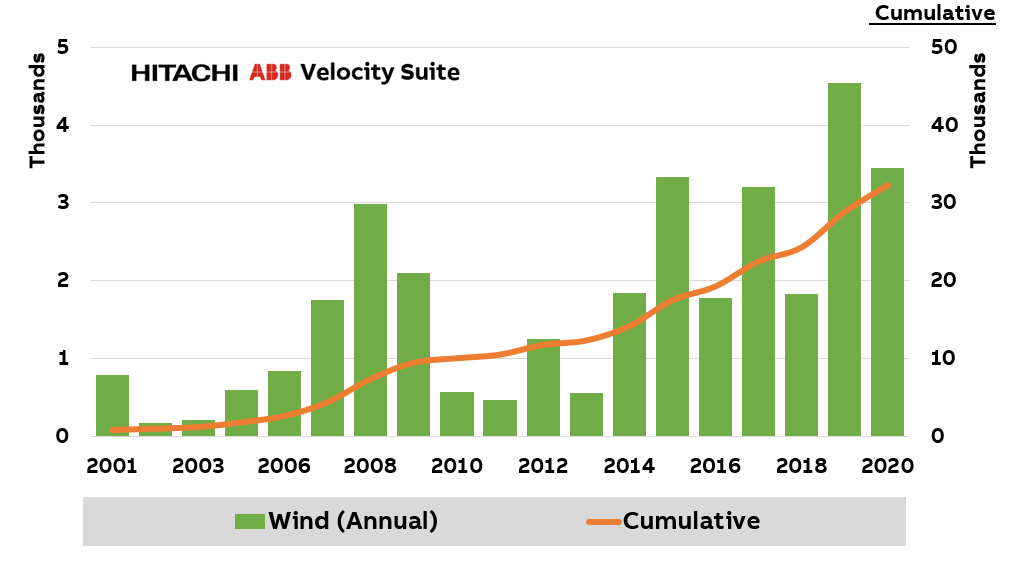 Some additional benefits derived from the grid build-out include lowering overall average wholesale electricity prices and a significant reduction in CO2 emissions.  Over the past decade, CO2 emissions from electricity production in Texas have declined by more than 20%.  The primary drivers behind these benefits have been the steady high growth in low variable-cost wind resources.  Along with the enablement of more wind resources in western Texas and the Panhandle, the growth in shale gas drilling across the region has benefitted from the increased availability of electricity from the power line build-out.  Based on the tremendous growth in wind capacity in Texas, it can be argued that the Texas CREZ initiative was a tremendous infrastructure success.

Obstacles to development are many

There are many obstacles to the development of long-haul transmission projects, including the timely acquisition of regulatory permits, dealing with landowner activism, and determining the stakeholders – who will pay and who will benefit when the power lines are energized?  Projects are often prone to lengthy delays and even cancellations.  These factors, plus the high capital investment requirements, mandate that the regulatory process be predictable and supportive.

The Texas CREZ initiative is a prime example of how massive long-haul transmission projects can be done on time and on budget.  Both developers and regulators have benefited from the lessons learned during this grid build-out.  The Texas effort was built to benefit ratepayers in Texas.  It will take a more complex but doable interregional planning and development process to enable the federal carbon reduction mandates.  Streamlining the development process with expedited permitting and right-of-way determinations and allocating the costs fairly will be keys to future project success. The benefits of grid expansion are many but most importantly include improved reliability and the building of adequate interconnections for wind and solar farms.  Grid investment is the best bet for achieving future carbon reduction goals and maintaining a reliable transmission system.

Interconnection customer must pay for network upgrades, this cost allocation is done in generator interconnection or transmission access planning bucket at MISO.

The customer of the transmission owner pays for baseline reliability projects, cost allocation of which is allocated in expansion planning bucket at MISO.

We must close this gap of siloed planning. I think we all realize renewable interconnection projects are not going anywhere. Hence if we believe in interconnecting more renewables to the grid, we must close the gap in cost allocation of network upgrades and expansion planning projects. And give interconnection customer whose projects are delayed the option to study alternatives to network upgrades including grid enhancing technologies such as SmartValves.

Rao, thanks for your comment.  Well said on all fronts.  I see a lot of interest in finding new ways to justify, build and fund long-haul interregional high-voltage transmission projects -- maybe through better designed financial incentives?  The growth in wind capacity in SPP, MISO, and ERCOT was made possible by some of the major projects (e.g. MISO MVP, CapX2020, and Texas CREZ) constructed over the past decade . . . projects that partially took advantage of the attractive incentives coming out of the 2005 Energy Policy Act through FERC's Order 679.  I believe these incentives drove nearly $50 billion in development since its inception.  How do you optimize wind, solar, and even natural gas across thousands of miles of terrain . . . the long haul high capacity lines seem to be a decent solution.  Every major project has led to high growth for renewables . . . but almost as quickly as the lines are energized, they're absorbed.  As always, lots to think about and solve.  thanks again for your comment.

Kent, with solar and wind being the lowest cost and fastest to deploy I would imagine the growth will be even greater.

I'd also like to see the advanced battery storage  shown along with the renewables. It can reduce transmission needs further. It lets more renewable be a solid part of the GRID.

what are other opportunities you see coming up?

The "Western grid" - is a great example of new transmission projects and huge amounts of renewables coming online - 40GW in the the first half of the 20s.

Also, a lot of projects are planning on using "space" on transmission lines once coal plants are retired. Colstrip is an example of this.

TransWest transmission line 'will open for service in 2025

Greenlink Nevada Gets Green Light to Power Up

The $2.5-billion Greenlink Nevada project aims to strengthen the electrical grid, reduce carbon emissions, promote renewable energy development and position the state as a major exporter of clean energy. It calls for approximately 580 miles of 525-kV lines that will link Las Vegas and Reno with new solar fields and geothermal plants. 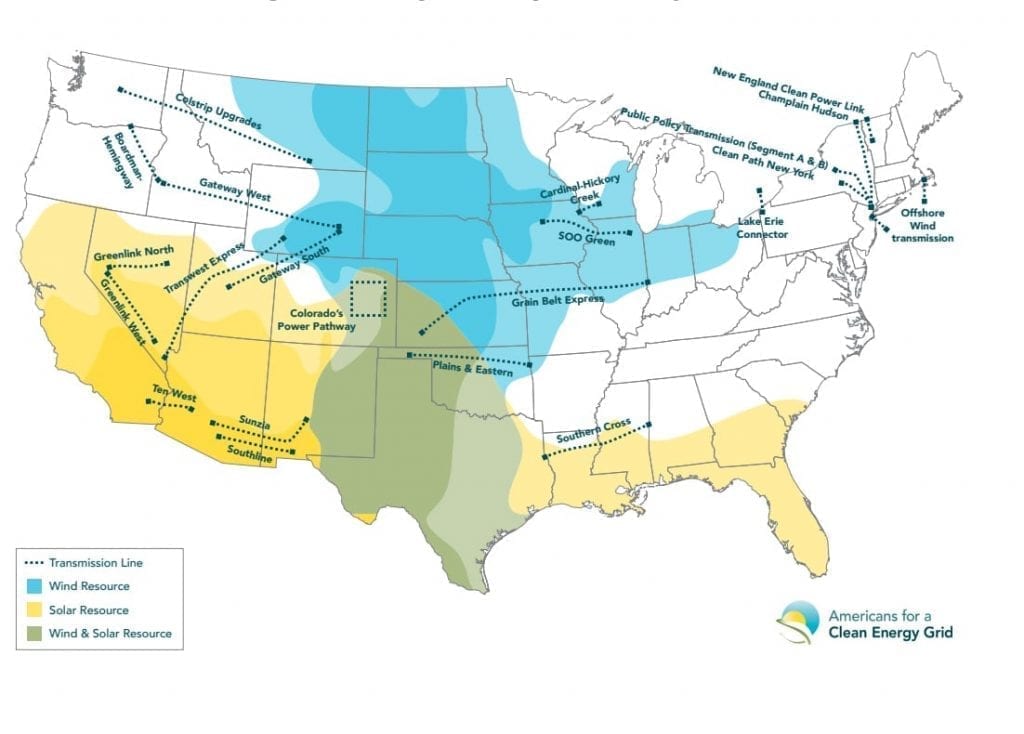 Joe, great commentary . . . the map from the Americans for a Clean Energy Grid is nice.  You mentioned the use of existing coal plant transmission to support green energy projects.  I wrote a piece a while back about the retirement of the Coal Creek Plant in North Dakota . . . https://energycentral.com/c/gn/north-dakota%E2%80%99s-largest-power-plan... . . . our company, Hitachi ABB Power Grids (formerly ABB's Grid's division), completed a $130 million upgrade to the 436 mile HVDC connection between the plant and a substation in Dickenson, MN . . . it was a 74-day effort that was completed ahead of schedule and under budget on May 17, 2019.  It's an awesome asset ready to move power in MISO.  As of a couple of months ago, Great River was talking with a potential buyer of the plant and the transmission line.  Throughout the west, the existing high-voltage grid represents numerous conduits for moving large amounts of renewable power over long distances.  thanks again for your comments.

Regarding using space on T line when coal plant retires, I want to point out something that is currently happening at MISO, the grid operator based in Carmel, Indiana.

Rao, thanks for adding the link to this chain . . . very timely and good to know.

Thanks for this info.  The situation out West may be a little different... because of lack of ISO and line ownership.

If you look at the Colstrip coal plant in Montana a lot of the coal generation used to/still is shipped to utilities in Washington and Oregon.  These customers no longer want coal but they would definitely like to get wind generation from Montana and the Colstrip transmission lines are perfect for this.