Addressing climate change requires the decarbonisation of energy supply and demand by 2050. The United States, Europe and China have committed to net zero or carbon neutrality by mid-century. Others are following suit. This will have a profound effect on the global energy transition, placing electricity as a key vector to decarbonize the whole energy sector. The latest insights from IRENA’s World Energy Transitions Outlook have been released 16 March at the Berlin Energy Transitions Dialogue. It provides in-depth analysis what these effects will look like, starting from the Paris Climate agreement objective of limiting climate change well below 2 degrees and with an effort for 1.5 degrees Celsius by the end of this century. While several options are considered for a deep decarbonisation, it is clear that renewable energy, energy efficiency and electrification are at the centre of the global energy transition.

While climate change mitigation is a powerful driver to shift away from fossil fuel-based power generation, this is not the only driver. At the same time, renewable power has become the cheapest from of generation and the cost continue to fall as technology improves and economies of scale drive down cost. The shares of renewable power continue to rise from year to year, with nearly 30% renewables in the global power mix at present and renewables dominating yearly capacity additions (Figure 1). 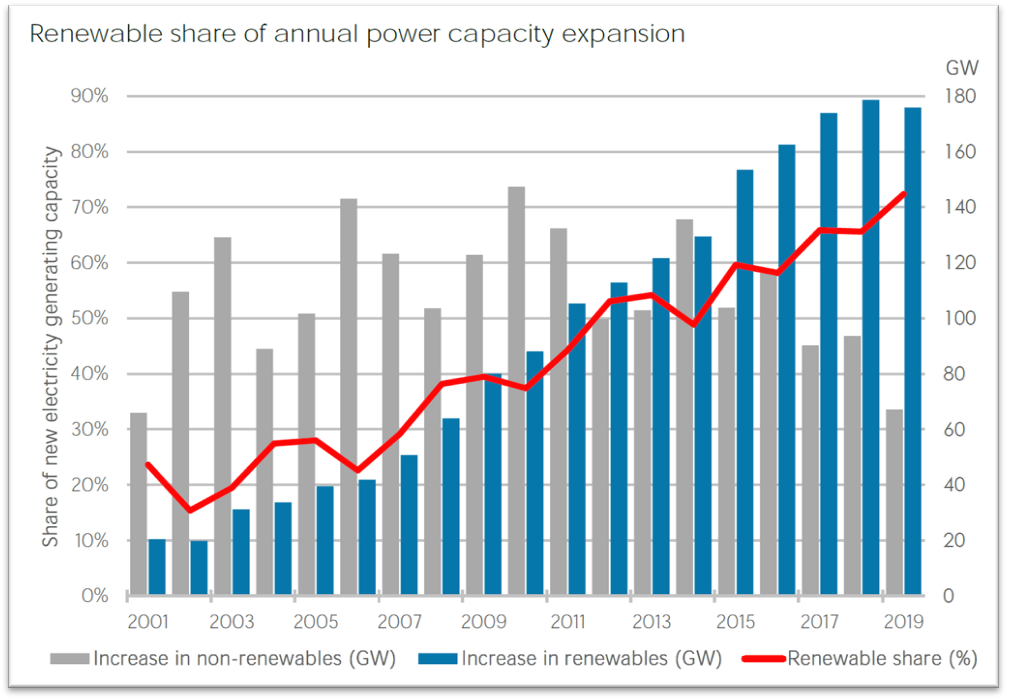 New IRENA analysis indicates a continued swift transition to renewable power generation worldwide in the coming three decades, with shares of variable renewables -solar PV and wind- growing especially rapidly. Variable renewables will dominate total power supply by 2050, a major change from today’s situation. Yet experience from around the world shows that it is possible to operate power systems with high shares of variable renewables, as witnessed in Germany, Ireland and the United Kingdom, amongst others. During 2020, despite the COVID-19 pandemic, the share of renewables (mainly variable) in total electricity generation was 40% in Europe, a more than 4% increase in the share in comparison to 2019. Most notably, during the same period of time other generation sources decreased its share in Europe between 6% and 16% as in the case of coal-based generation.

The operation of power systems with high shares of variable renewable requires much higher flexibility. Today dispatchable fossil plant provide that flexibility but this will change going forward as their role declines. IRENA has identified 30 options to increase flexibility across four main pillars: hardware, markets and regulations, and operational practices and business models (Figure 2). This toolkit of options must be deployed in the context of each power system’s specific characteristics. Especially the demand side offers interesting possibilities, as the electrification trend results in new loads connected to the system -such as electric vehicles, behind-the-meter batteries and heat pumps- which if operated smartly can support grid balancing. This is helped by rapid digitalization of power systems. Time-of-use pricing, aggregators, Demand Side Management are some of the strategies that benefit from digitalization and smart grids continue to expand worldwide. Still many transmission and distribution grids will require expansion and upgrading in order to deal with the new power system realities.

Also, regulations and grid codes need to be adjusted in order to enable to full deployment of the new flexibility options. This is an area that warrants more attention. 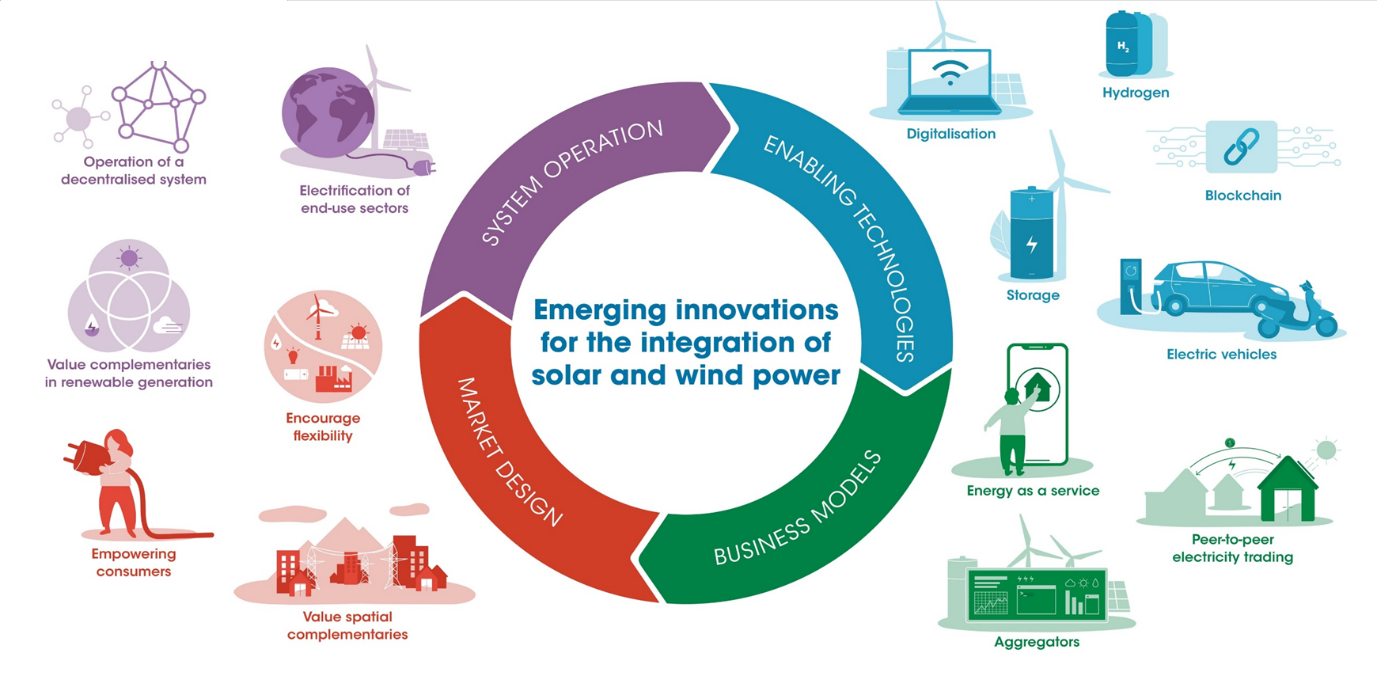 Electrification, including buildings, transport and industry, as well as the production of green hydrogen, will play a key role in a net-zero CO2 emissions future.

IRENA analysis suggests that up to a quarter of all electricity will be used for the production of green hydrogen. At the same time a massive shift will occur towards electrification of road transportation while synfuels produced form clean hydrogen will play an increasing role in aviation and shipping. Whereas better building efficiency will reduce the need for heating and cooling, this is balanced by a shift to electric heat pumps. The analysis suggests that direct electricity use and indirect electricity use for production of green hydrogen and derived synfuels may account for 60% of total final energy use by 2050, up from around 21% today. As a consequence, electricity demand will grow 3-4 fold from today’s level. This represents a massive shift and the electricity sector becomes the central piece of global energy supply and demand, a much bigger role than in past decades. Traditional incumbents in the energy sector, such as oil and gas companies are already eyeing this trend and developing strategies to become electricity market players. It remains to be seen who will become the dominant player in this market in coming decades.

Given the growth in electricity demand and the shift to renewable power a massive expansion of clean power generation will be needed and infrastructure planning must be ramped up accordingly. The investment needs are hefty and its critical to ensure that the infrastructure rollout speed is commensurate with the energy transition needs. This will require further streamlining in planning and approval processes.

IRENA continues to work with its 164 member countries to devise and implement transition strategies for power sector transformation based on its Innovation Toolbox, Flextool, power systems planning and grid studies.

Given the growth in electricity demand and the shift to renewable power a massive expansion of clean power generation will be needed and infrastructure planning must be ramped up accordingly. The investment needs are hefty and its critical to ensure that the infrastructure rollout speed is commensurate with the energy transition needs. This will require further streamlining in planning and approval processes.

Dolf, Great article. the key to keeping this trend going is in part cost but also more and more about the water which I didn't see mentioned. In the Far East it is more valuable than Oil. .  QUOTE=At the same time, renewable power has become the cheapest from of generation and the cost continue to fall as technology improves and economies of scale drive down cost

Renewable electricity, a key pillar for the global energy transition, the basis for balancing the social debt in regards to water, sanitation and solid waste, which are a chaos in our territory, we have had bottlenecks from the government itself, already that the lack of knowledge about the real problem of global warming does not seem to matter to the rulers of many Latin American countries, I dare say, it is painful to have the natural resources ready to enter renewable electricity in the first instance, following the adaptation recommendations Under the resilience of ecosystems, specifically the first-ever human ecosystem, gender equity, if not the vulnerable population is going to have serious problems, as renewable energy does not enter, in its entirety to support the global effort.

I congratulate the places that are already serving the entire population of their community in relation to RE.