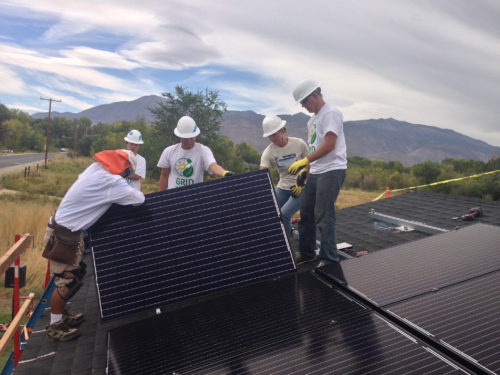 America’s clean energy sector could have a bright future, pushing down electricity costs, cleaning up emissions, and potentially supporting hundreds of thousands of new jobs for years to come—but if all Americans are to benefit, much work needs to be done to address injustice in the sector, say industry observers.

“In this moment of reckoning and reflection about racial inequity in our country, it’s time to be forthright about the inequalities in the rapidly expanding business of clean energy,” writes InsideClimate News.

Optimism about growth in clean energy has recently been boosted by a new report co-authored by the University of California, Berkeley and Berkeley-based GridLab that “brings together several important threads in energy policy and economics”, InsideClimate says. It shows that, by 2035, the U.S. can reach 90% clean energy in ways that will lead to “500,000 new full-time jobs every year and a decrease in wholesale electricity costs of 13%.”

But casting a long shadow over this projected success—most evidently in the area of solar—is the reality that Black and poor communities are far less likely than their white and affluent counterparts to benefit from the promised jobs, cleaner air, and lower bills.

“At the same time, residents of neighbourhoods with Black or Hispanic majorities are much less likely to have rooftop solar than residents in white neighbourhoods, even after accounting for differences in income and home ownership rates,” adds InsideClimate, citing a paper published last year in the journal Nature Sustainability.

Such inequities dovetail with a profound environmental injustice: InsideClimate notes that studies conducted by the EPA, the American Lung Association, and many other bodies show that “majority Black neighbourhoods also have higher levels of air pollution from industry and fossil fuel electricity than majority white neighbourhoods.”

The police killing of George Floyd has brought many of these issues to the forefront, said Alvaro Sanchez, environmental equity director at The Greenlining Institute in Oakland, California. “It almost feels like finally everybody sees what we have been saying for a very long time,” he told InsideClimate. “Systematic oppression, white supremacy, and racism are really at the core of the way we’ve developed everything here.”

To redress such systemic oppression, said Sanchez, governments must make equity a key consideration in any decisions to fund research or provide subsidies in the clean energy sector.

But some are not inclined to wait for “grown-ups” to act in the interests of social and environmental justice. Earlier in June, students in Salt Lake City showed up in great numbers to convince their school board to commit, unanimously, to 100% clean electricity by 2030 and fossil-free transportation and heating by 2040. Led by seniors from multiple high schools across the city, the initiative was viewed by the students as “a first step toward tackling environmental inequity and environmental racism in Salt Lake City”.

Calling out the “disproportionate impact” of the city’s airport, freeways, and refineries, high school senior Mahider Tadesse noted that “they all contribute to the poor air quality, and that’s where most of our minority communities live”.

but if all Americans are to benefit, much work needs to be done to address injustice in the sector, say industry observers

This is true, and it's important that any sweeping action on clean energy needs to treat environmental justice and access to all parts of the population as an essential, fundamental building block of the policy-- not a 'nice to have' add-on. It simply doesn't work without those considerations