Power to X & Energy of the Future To meet the tenets of the Paris Agreement, Germany first started using a term more than the others. The Power to X (PtX or P2X). An umbrella term for the electricity conversion, energy storage, and reconversion pathways that tap into renewable energy in order to make a carbon-intensive fuel into carbon-neutral future fuels.

X denotes that fuel or gas that can benefit from this technology and in the process become more sustainable, if not eco-friendly. PtX could be the answer to all those economic sectors and industries that still run on fossil fuels. 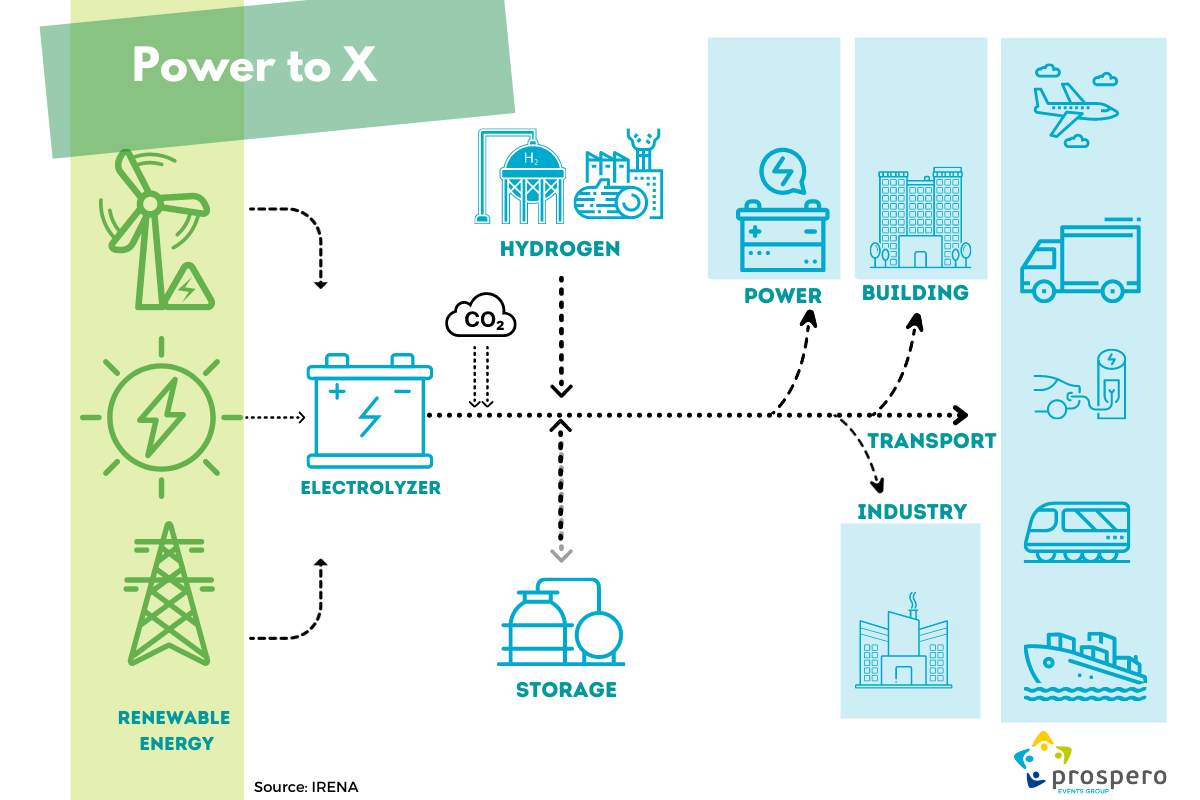 The X variable can be any of:

Hydrogen generated from the electrolysis is reacted with carbon dioxide to produce liquid fuels such as synthetic crude, gasoline, diesel and jet fuel. Power-to-chemicals, Power-to-hydrogen, power to fuel and power to gas would fall under it. Power-to-ammonia uses an electrolyzer to turn renewable energy into NH3 or Ammonia, which then can make a “sustainable super battery”.

The excess electricity supplied from renewable sources can be better used to address heating needs. In Germany, a small town of Lemgo implemented a 5 MW electric boiler for district heating services and it generated 7.5 GWh of heat. This provided 5% of the total heat supply in Lemgo in 2012.

Using hydrogen for energy storage provides unique opportunities. We can produce hydrogen during times of excess renewable electricity and they can convert it back to electricity to provide power when the renewable source is unavailable, helping stabilise the utility grid. The electrolyzer can be cycled up and down rapidly to be used as a flexible load providing low-cost balancing services to the power system.

What does Power-To-X need?

Two things. Hydrogen and CO2 from the atmosphere.

To get hydrogen through the electrolysis of water, renewable energy/ electricity is preferred because otherwise, it wouldn’t make the process sustainable. Getting rid of CO2 from the atmosphere has been a big thing for some endeavours. Swiss company Climeworks, for instance, opened their first commercial plant back in 2017 to suck around 900 metric tons of CO2 from the air every year. This costs them around 550 euros per metric ton of CO2. There are now 14 such plants in Europe, and more are proposed.

There are about 20 countries in Europe engaged in PtX projects. A pan-European project is in the offing for the Netherlands, Denmark, and Germany, to tap into the hydrogen produced offshore in the North Sea.

Germany has the most PtX projects is Germany, 44% in fact. France and Denmark follow suit. They started a concerted effort back in 2016, with a €30 million first-phase research project funding on PtX. Back then their renewable energy was just 12.6% in the power mix. Now in 2021, renewables cover 40% of all energy consumption, providing a strong backbone for PtX adaptation for the rest of its power consumers.

Eastern European countries don’t have a lot of PtX projects. Poland, Estonia, and Latvia have a few active projects to comply with the Clean Urban Transport for Europe (CUTE) project in 2003, for fuel cell buses. With the EU’s new funding schemes, there exists the opportunity for those member states that don’t have any active PtX development yet.

Why aren’t there more PtX facilities around us?

The cost of setting up is definitely the biggest barrier. The sustainability or carbon-neutral angle that PtX facilities are hoping for has not been a reality for many. Many still produce hydrogen from crude oil and natural gas as they are a good deal cheaper.

There are also questions about its efficiency. For when energy is converted into another, there would be losses. In fact, Christian Breyer, professor of solar economics at LUT University in Finland believes it won’t be more efficient as it generates and loses energy with a lot of heat. About 20 years ago, photovoltaic (PV) solar power seemed too expensive. Now, with state support, and soaring demand, their costs have plummeted.

Is it going to be the same with Power-to-X?