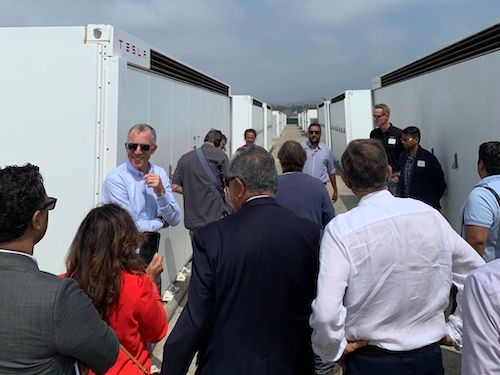 This story has been updated to include news of a gas compressor leak in Ventura County July 6.

A California utility’s decision to replace a natural gas peaker plant with a battery storage installation is being hailed as a victory for environmental justice and an example of what the future of the state grid could look like.

“What sets this battery apart from others like it is that it enabled local activists to stop a plan to build a new gas plant in its tracks, in a long-shot environmental justice campaign that points to where the clean energy transition is headed,” Canary Media reports. “Now the battery site demonstrates how to locate large amounts of power within populated areas.”

The system of 142 Tesla Megapack batteries, installed on a two-acre site in Ventura County, went online last Tuesday. With 100 megawatts/400 megawatt-hours of capacity, it holds “enough power to run the coastal city of Oxnard, CA, for four hours in a pinch,” writes veteran renewables reporter Julian Spector. But “most of the time, the battery serves the broader grid, soaking up California’s surplus mid-day solar power and then delivering electricity during more expensive evening hours.”

“Saying no to a gas peaker plant and yes to battery-stored energy has provided our community with a non-polluting power plant, increased our tax base, and created good jobs and ultimately better health for the people,” Ventura County District 5 Supervisor Carmen Ramirez told Electrek. “This project is truly a testament to Oxnard’s determination and resilience to modernize and better our community.”

“We’re now going to be able to bring people here and [show that] this is pretty benign,” said John Breckenridge, head of clean energy infrastructure at Capital Dynamics, the company that owns the battery. “It doesn’t make any noise, no pollution—it’s all protected.”

And indeed, “what hits you first is how humble it looks,” Spector writes. “A series of white metal boxes on two dusty acres across the street from farmland. It emits no fumes and makes barely a murmur. It’s one of the biggest grid batteries in the world.”

This was not always the way the story was going to end. “When utility Southern California Edison needed more power back in 2013, it gave the contract to major power producer NRG Energy to build the Puente gas-fired plant on the beach in Oxnard,” Canary Media recalls. “But the people of Oxnard—an agricultural city of 209,000, nearly three-quarters Latino, down the coast from more affluent Carpinteria and Santa Barbara—didn’t want another industrial facility polluting the coast for decades to come. They already had two power plants and a Superfund site eating up their stretch of shoreline.”

By 2017, “batteries had proved themselves as a grid tool,” the news story notes, after a record-breaking, 112-day methane leak at the Alison Canyon gas storage facility imperiled power supplies in the southern part of the state.

When the utility issued a tender to replace the Puente station, the biggest contract was awarded to North Carolina-based Strata Solar. While Oxnard was Strata’s first attempt at large-scale energy storage, Canary Media says it’s now a key growth area for the company.

“We created a very interesting template for how [to] do this at scale, so it’s better, faster, stronger for the next one,” said Strata chief development officer Joshua Rogol. The company is currently negotiating several gigawatt-hours of storage projects in the western U.S., and has contracts for a half-dozen stand-alone batteries in the east.

“After developing the site, Strata sold the project to Arevon, an affiliate of Capital Dynamics, which invests massive amounts of money to construct and operate clean energy projects for the long haul,” Spector writes. “The Oxnard project is Arevon’s first large battery array to come online, but the company has nearly 10 times as much storage capacity in the construction pipeline.”

While the ribbon has been cut on the Oxnard battery, the environmental justice work—in a community where United Farm Workers co-founder and human rights activist Cesar Chavez first organized in 1958—is still not done.

“Work is under way to deconstruct the old power plants still occupying the waterfront,” and “then the county must deal with the aftermath of oil extraction that in some cases leaves abandoned wells for taxpayers to clean up,” Canary Media writes. But “as those battles continue, Oxnard’s battery stands as a quiet reminder that coordinated action can change the energy landscape.”

And none too soon: On Tuesday, the Ventura County Star reported that residents had called in the fire department over the weekend, after a compressor station across the street from a local school went through a round of “unplanned venting”. The smell of gas in the air had people worried about a possible leak. A Southern California Edison spokesperson said the “controlled venting of natural gas was not a threat to public health or safety”, but Food & Water Watch organizer Tomas Rebecchi was unconvinced.

“It’s still harmful,” he said. “No matter what they say. It’s not dissipated if residents are smelling it.”

Canary Media has more on a battery project that has emerged as a clean grid trendsetter.

Mitchell, I never would have thought batteries could replace a dispatchable power plant. If electricity comes out of the outlets on my wall, can they replace a gas peaker plant too?

Glad to see the environmental justice issue of gas plants getting some attention, and not only that but more importantly some action! It will be interesting to see how the numbers start to develop re: in areas where energy storage increases what will be the measurable drop in speaker gas plants. I don't expect it'll be an exact one-for-one replacement as there are a lot of factors in play here, and that will have to be watched and studied carefully.

So what is the impact on the cost of electricity for the residents?
More directly, what are the financial terms ($/mWH) of the power purchase agreement with the city? Kind of an obvious question that the article fails to mention.

There is nothing environmentally sound about batteries.

Ask APS when their was a fire and Hydrofluoric Acid gas was discharged put the first responders in the hospital.