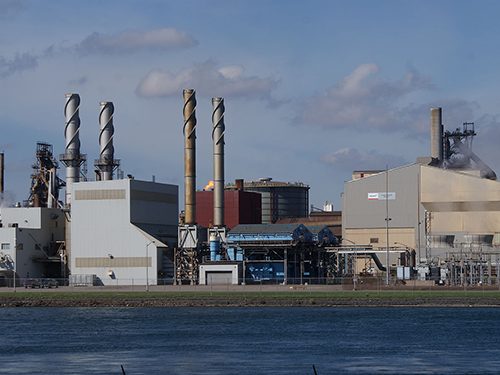 Algoma Steel in Sault Ste. Marie, Ontario will receive up to C$420 million in federal funding to replace its coal-fired production processes with electric arc furnaces, one of a trio of green infrastructure announcements this week that included a high-frequency rail promise for the Quebec City-Toronto corridor and light rail funding for the long-delayed Green Line in Calgary.

While the flurry of activity fuelled speculation that a federal election call is just around the corner, a newly-beardless Prime Minister Justin Trudeau insisted he was just governing. “I think Canadians expect us to keep moving forward on our priorities, which are and have always been to grow the economy, create good jobs for Canadians, and [address] climate change at the same time,” he said in Sault Ste. Marie Monday. “That’s what we’ll keep doing.”

The action Monday and Wednesday included:

• The Algoma Steel announcement, aimed at cutting the plant’s greenhouse gas emissions by three million tonnes per year by 2030, funded by a $200-million grant from the federal Net-Zero Accelerator and a $220-million loan from the Canada Infrastructure Bank;

• Trudeau in Calgary yesterday to announce federal funding for Calgary’s Green Line, a long-awaited project that had been stalled by Jason Kenney’s United Conservative government.

In Sault Ste. Marie, the PM said the Algoma Steel investment would create 500 jobs and 600 co-op placements and reduce the plant’s emissions by 70%, the equivalent of taking 900,000 internal combustion cars off the road. “As the world transforms towards lower emissions, investments like this create jobs, create sustainability, and create a better future for us all,” he told media.

“There’s no doubt that climate change is the test of our generation,” he added. “Fighting climate change and growing the economy must go hand in hand.”

Algoma Steel CEO Michael McQuade said the technology shift would be one of the cheapest ways for the country to cut emissions based on cost per tonne. “The world can’t get to net-zero without steel,” he said.

But the local job picture was a bit blurry in the hours after the announcement, with Mike Da Prat, president of Algoma’s largest union, warning that the shift off coal would cost hundreds of local jobs. SooToday.com says Da Prat “was conspicuous by his absence” at Trudeau’s event and accused the company of violating its collective agreement by refusing to consult the union on a cost-cutting measure.

In an opinion piece Monday, Toronto Star economics columnist Heather Scoffield says the announcement “looks different than the billions in subsidies that have gone to other large emitters, especially oil and gas, in the past. It’s not money meant to prolong the dependence of our economy on fossil fuels. But it’s not quite different enough.”

The project showcases the government’s “big-money approach” to building back better, anchors a major regional employer for the next two decades and, combined with a similar deal that may be in the works for the Dofasco steel plant in Hamilton, would reduce emissions from Canada’s large emitters by 7.8%, Scoffield writes. “But there’s a lot we don’t know about how the deal is structured and whether the standards established in the Algoma deal will have any influence on the rest of the billions the government has on hand to give or lend to Canada’s biggest polluters.”

Without more detail on the detail, she says it’ll be impossible to assess whether Algoma would have invested in the new technology without federal support, or confirm the terms under which the company will be expected to meet its emission reduction targets.

Julia Levin, senior climate and energy program manager at Environmental Defence Canada, said Trudeau’s announcement was “important” at a moment when “we need to quickly shift all of our industries away from fossil fuels to renewable energy in order to avoid catastrophic runaway climate change.” But as Ottawa “continues to allocate grants for decarbonization, strong climate conditions are critical to ensure this spending doesn’t lock us into continued dependence on fossil fuels,” she added in a statement.

The Canadian Environmental Law Association welcomed the announcement, said Northern Services Legal Counsel Kerrie Blaise. “Phasing steel off coal is a really big deal—regardless of whether it would have eventually happened anyway,” she told The Energy Mix in an email. “Speeding up this mega-transition is essential for climate and pollution prevention in the community.”

But a key outstanding question, Blaise said, is whether the technology shift will eliminate the “so-called need” for the provincial air quality exemptions the Algoma plant has received. “We know that reliance on cheap coal-generated electricity results in high levels of air contaminants, including volatile organic compounds, particulate matter, sulphur dioxide, mercury, and carbon dioxide,” she wrote.

“Currently, the Algoma Steel site is exempt from Ontario’s air quality standards for benzene, benzo(a)pyrene and some particulate matter, allowing them to emit multiple orders of magnitude above what is otherwise permitted,” even though benzene is a carcinogen with no safe level of exposure.