"In a recently-released report by the City of San Antonio Community Emergency Preparedness Committee, two things stare us in the face. First, renewables wind and solar are not considered part of the city’s baseline [baseload] power. And second, there’s no mention of nuclear power as a viable option for a future baseline power source, despite the fact that nuclear is the only one of our three baseline power sources with no carbon footprint.

Reactors will not only provide always-on affordable power, but they can add to the reliability of renewables by providing 100% clean energy when needed. They should be viewed as an exciting complement rather than a competitor to renewables.

Based on its history as a reliable, robust, and safe source, nuclear power will be a cornerstone of our power sources well into the future, and elected and industrial leaders must have the courage and willpower to focus on nuclear power as part of our strategy.

During my career serving on four submarines, I came to appreciate the U.S. Navy’s outstanding record of over 134 million miles safely traveled on nuclear power. The submarine force has protocols in place that recognize the need to balance the safety of the nuclear propulsion plant with the safety of the ship that it propels. Adm. Hyman Rickover, the “father of the nuclear Navy,” produced a culture of reactor safety built into engineering rigor, but more importantly, selection and training of operators. The commercial industry has grown out of this incredible record and culture of safety."

Nuclear energy should be viewed as an exciting complement rather than a competitor to renewables.

Easy question for you.

Which will happen first?

1. Wind and Solar double their combined output to 200 TWh in a year

2 A new nuclear reactor gets built in Texas. 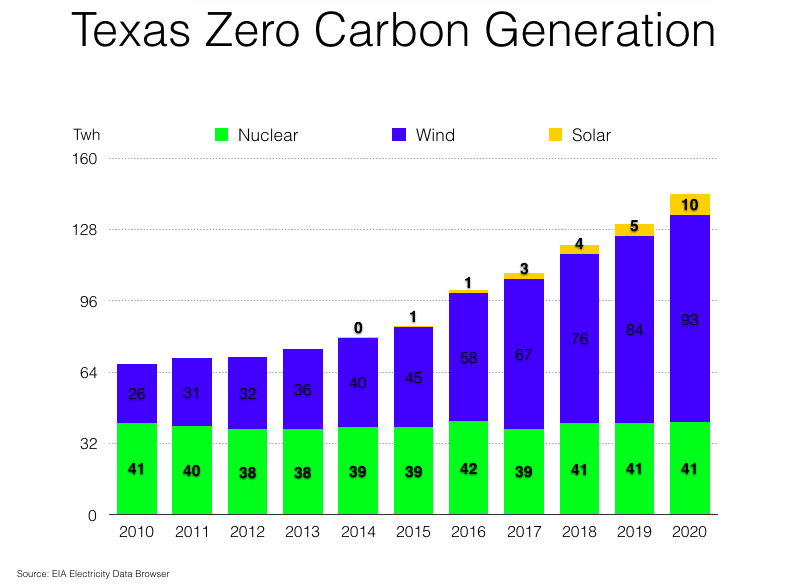 Impossible to predict, Joe, to what extreme irrational anti-nuclear activists will take their crusade in Texas, or anywhere else. I know you have full confidence they'll be able to shut down nuclear energy in Texas, but you're wrong.

If you want to comment on what the author of the article writes it might add to the discussion. But you don't - you want to post homemade graphs totally unrelated to any of the points he makes. Standard anti-nuclear fare: when backed into a corner by facts, shower the discussion in irrelevant propaganda. Distract.

How about if you show us the same graph, but hour by hour, for the last week? Include gas generation. Show us how nuclear is steady as a rock, how wind and solar are all over the map, and how they're 100% dependent on gas to fill in the holes in their production - you know, the stuff that actually matters to people who live in Texas. Though it's impossible to predict with certainty what energy choices they will make in coming years, my money says reliability will win out over unreliability; that opposition to the immense land footprint of wind, solar and the thousands of miles of transmission necessary to connect them all together will continue to grow; that as the memory of Fukushima fades into the past and the impacts of climate change worsen, nuclear will continue to gain traction as Texans realize wind and solar aren't getting the job done.

But I don't know, and neither do you.

The title of the article you linked to is :

If nuclear is indeed the "key to the future" - shouldn't Texas be able to build a single reactor before wind/solar can double their entire current output? Just one reactor Bob - that's all I'm asking for.

Also, this has nothing to do with anti-nuclear activists shutting down current nuclear in Texas. The current nuclear plants in Texas are still "middle-aged".  I expect them to grow older and retire when they get into their 50s(maybe even 60s) just like the rest of the WW nuclear fleet.

However, it is not "impossible to predict" the answer to the question I posed. I'm making the prediction :

A nuclear reactor would generate about 10TWh in a year so that means the wind/solar will add the equivalent of one reactor per year for this decade or ten reactors in total.

So far in 2021 - first half of the year - wind/solar generation are up 5.5TWh so slightly ahead of schedule.

But hey - maybe I'm wrong Bob - maybe I am overestimating future solar/wind growth and it will actually be 2034/2035 before wind/solar doubles.  Can Texas build a single new reactor before then? After all, nuclear is the "key to the future"...right?

Nuclear power was mentioned in the report:

"The baseload coal, and nuclear generation plants did not perform as required during the winter storm and the dispatchable natural gas generating plants did not operate sufficiently to make up for the lost production."

Yes, one reactor at South Texas shut down due to a frozen cooling pipe outside the plant. All pipes were insulated, and the reactor was online 30 hours later.

Have all of Texas's 10,700 wind turbines had heaters installed to prevent them from freezing again in February? If so, how much did it cost?

I've heard engineers at South Texas were able to score some insulation at Home Depot. That and duct tape probably cost < $200.

There is a persistent mindset focusing on "renewable" generation, which includes wood burning generators in some cases, when it would be more effective to focus on zero-emitting resources, if we want to have a positive impact on climate change. IMO, you cannot have an effective solution without zero-emitting nuclear power generators. The Navy's own record with nuclear power proves that it can be used safely within close proximity of humans.

Richard, in my cycling club I used to ride with the former captain of a nuclear sub. That the public was afraid of fission reactors burning fuel that's half as reactive as that used on submarines, where crews work, eat, and sleep within a few meters of the reactor core for months at a time, was incomprehensible to him.

There will be nuclear accidents in the future - of that, I have no doubt. But like commercial aviation, safety has dramatically improved, and will continue to improve. That a technology with so much energy in so little space had the possibility of disastrous consequences was anticipated by U.S. engineers, but not in other countries. For the USSR and Japan, Chernobyl and Fukushima were lessons that had to be learned the hard way.

"That a technology with so much energy in so little space had the possibility of disastrous consequences was anticipated by U.S. engineers …"

Yes, they anticipated it so well that southern Pennsylvania was almost divided in half.

As for Fukushima, its problem was that it was built in an area subject to earthquakes and tsunamis. Good thing our great engineers never allowed us to put nuclear power plants in such places.

"As for Fukushima, its problem was that it was built in an area subject to earthquakes and tsunamis. Good thing our great engineers never allowed us to put nuclear power plants in such places."

Peter, due to the foresight of U.S. engineers at General Electric over sixty years ago, all reactors at Fukushima shut themselves down during the Tohoku earthquake, as planned. Residual heat in the reactors had minutes to be removed, however, and due to lax Japanese construction standards, backup generators were located a scant five meters above sea level. Immersed in seawater by the ensuing tsunami, they weren't available to power cooling pumps, leading to explosions and radioactive material being dispersed into the environment.

Compare to Diablo Canyon Power Plant, on the Pacific near San Luis Obispo, California. It's located on a parcel of land that, prior to construction, underwent more seismic study than any in history. Its emergency generators are located 80 meters above sea level, specifically to prevent impacts from a tsunami from endangering the surrounding community. So yes, it is indeed a good thing our great engineers never allowed us to put nuclear power plants, or their emergency backup generators, in such places.

Though southern Pennsylvania might have been "divided in half" in The China Syndrome, or another disaster film from the 1970s, I have good news for you: An 800-page probablistic risk assessment by the U.S. Nuclear Regulatory Commssion in 2015 assessed the possibility of reactor core damage at Diablo Canyon to be once every 14,250 years.

And melted nuclear fuel boring all the way through the Earth to China is impossible.

And that monster Godzilla? It's just a man in a monkey suit.