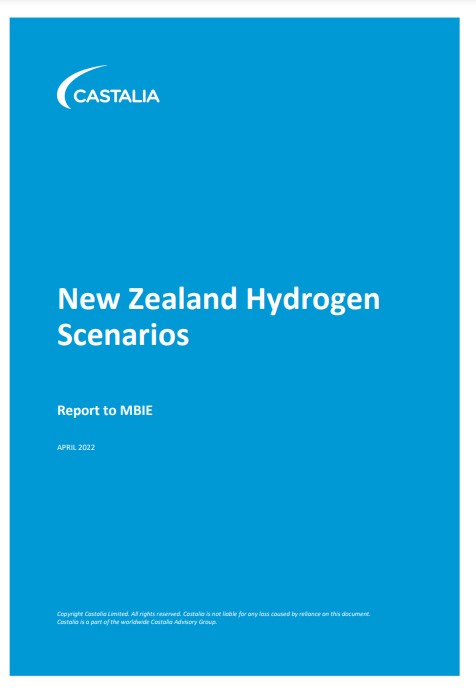 The New Zealand Government (the government) wants to develop hydrogen scenarios for New Zealand, following the development of the 2019 Hydrogen Green Paper ‘A vision for hydrogen in New Zealand’ and a hydrogen demand, supply and international trade model built by Castalia in 2020 (the Castalia-MBIE 2020 Hydrogen Model).

The scenarios will inform a Hydrogen Roadmap for New Zealand. New Zealand green hydrogen may account for around 8 percent of total energy demand by 2050 Hydrogen technologies and green hydrogen as an energy carrier could help the government achieve its greenhouse gas (GHG) emissions reduction targets. 1 As variable renewable electricity sources such as solar and wind increase as a share of generation capacity, the electricity system will need to become more flexible.

Green hydrogen is a flexible renewable energy (RE) carrier, which can be used in a wide range of applications, such as transport, energy and electricity system services, and industry. It can also be exported to assist overseas decarbonisation efforts.2 It can reduce emissions in high emitting and difficult to decarbonise sectors. Hydrogen could also offer a strategic opportunity for New Zealand to become less reliant on fossil fuel imports for key sectors, particularly transport, which creates future resilience against fuel security risks. It is not without its challenges, however. There are competing technologies which could offer lower cost emissions reductions. This report explores possible use cases of green hydrogen under a business-as-usual (BAU) in 2050 pathway, and also looks at New Zealand’s possible hydrogen economy in 2050 under specific intervention scenarios.

Our BAU scenario modelling suggests that around 8 percent of New Zealand’s energy demand could be met by green hydrogen as an energy vector in 2050. It is possible that this demand will increase over time as hydrogen technologies become more developed. Table 0.1 details New Zealand’s estimated hydrogen demand in 2050 under a BAU scenario, compared to other countries’ estimates. Those other estimates include lower-cost blue, brown and grey hydrogen, whereas our New Zealand analysis only includes green hydrogen.

Matt commented on ...
Wind and solar generated more electricity than gas or coal in the EU in 2022
The pivot point is upon us, that seems clear
Energy Central Jobs
Featured Jobs
More Jobs