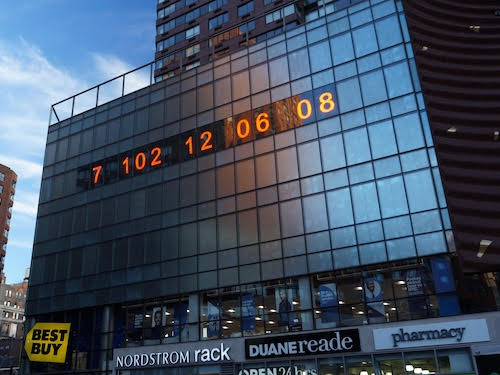 The New York City Climate Clock has added what the New York Times calls a “tinge of optimism” to its message of looming climate collapse, placing data on the rise of renewable energy alongside a countdown of the time remaining (by some estimates) before a 1.5°C climate future slides out of reach.

The #ClimateClock went live on September 19, 2020 on the Metronome, four stories above Union Square. The 15-digit electronic display is 20 metres wide and shows the time left for society to limit global warming rise to less than 1.5°C, after which environmental scientists say the worst effects of climate change will become irreversible.

“The Climate Clock was inspired in part by the Doomsday Clock, maintained online by the Bulletin of the Atomic Scientists, and by the National Debt Clock near Bryant Park in Manhattan,” the Times explains. Cities around the world have used temporary clocks as a visual image for the climate crisis since 2009, and #FridaysforFuture founder Greta Thunberg asked for one as a prop she could use in her landmark presentation to the United Nations in September 2019.

Security officials refused to allow the small device into the building because it had LED digits that were counting down. So organizers started looking for a permanent location for a large display.

The Metronome already featured a countdown time sculpture, and organizers convinced the building owner and city officials to support the new clock concept. They say the launch was reported by 450 news outlets in 40 countries, and their site now offers a clock app and widget to cities and climate activists around the world as an internationally-coordinated, open-source project.

Now, in time for Earth Day, the display has been updated to include the “lifeline” of renewable energy as well as the deadline to get emissions under control. “The numbers designed to measure the crucial window to cut emissions remain on the clock, but will alternate with the renewable energy number,” the Times says.

“It’s nice to have positive climate news,” said project participant Greg Schwedock. “That’s something the environmental community can be proud of.”

The current “lifeline” reading is 12.2% and rising, the organization says. But so far, “it is not rising nearly fast enough to meet our deadline.”