Now solar is also booming in Texas.  The combo of solar during the day and wind late afternoon/night is replacing coal generation. Most coal will be retired in TX  by 2030.

New utility-scale solar is poised to push much of the remaining coal‑fired power fleet across Texas into retirement in the next few years, finds a new report by the Institute for Energy Economics and Financial Analysis (IEEFA).

The report — “Solar Surge Set to Drive Much of Remaining Texas Coal-Fired Fleet Offline”— describes the increasing vulnerability of coal plants across the power-generation market managed by the Electricity Reliability Council of Texas (ERCOT), an area that covers most of the state. It sees upward of 70% of daytime coal-fired generation in ERCOT being at risk by 2022.

The report details also how wind-fired generation has set the stage for the rise of utility-scale solar, in effect delivering a one-two punch to a coal fleet that is down to 11 plants and will number 10 by October.

“Coal-fired power generation in Texas, pummeled by clean, no-fuel-cost wind over the past 10 years, is about to be hit by a second wave of competition from renewables as utility-scale solar power stands to gain significant market share over the next few years,” said Dennis Wamsted, an IEEFA analyst and lead author of the report.

“While installed solar power capacity in the U.S. has grown by almost 4,000% over the past 10 years, its growth rate across ERCOT has been even faster, with installed capacity increasing from just 15 megawatts (MW) in 2010 to 2,281MW at the end of 2019, a 15,107% increase,” Wamsted said. “ERCOT’s installed capacity could climb at a comparable rate this year, with current projections showing solar topping 5,800MW by the end of 2020.”

The report concludes that the gathering utility-scale solar surge will irreversibly alter the market’s daily dynamics and drive more coal plants offline by 2025.

“This June, for example, solar generation supplied 4 to 5% of daytime electricity demand on many occasions,” the report states. “Given its low cost, and given the Texas grid’s energy-only business model, which pays for electricity produced rather than mere generation capacity, solar is gaining — and will continue to gain — market share. This will come at the expense of more costly generation, most likely coal-fired, which will be backed out of the ERCOT generation mix by a comparable amount.”

The report also underscores the importance of the rise in battery storage technology, which is evolving quickly and is being adopted by a growing number of utilities and independent power producers.

“By enabling companies to store solar-generated power if it is not needed during the daytime, battery storage will allow firms to use that power during higher demand periods, further increasing the amount of at-risk coal-fired generation within ERCOT.”

New utility-scale solar is poised to push much of the remaining coal‑fired power fleet across Texas into retirement in the next few years.

"Now solar is also booming in Texas.  The combo of solar during the day and wind late afternoon/night is replacing coal generation."

Now let's get the story not from a solar advocacy website, but at eia.gov, website of the U.S. Energy Information Administration: 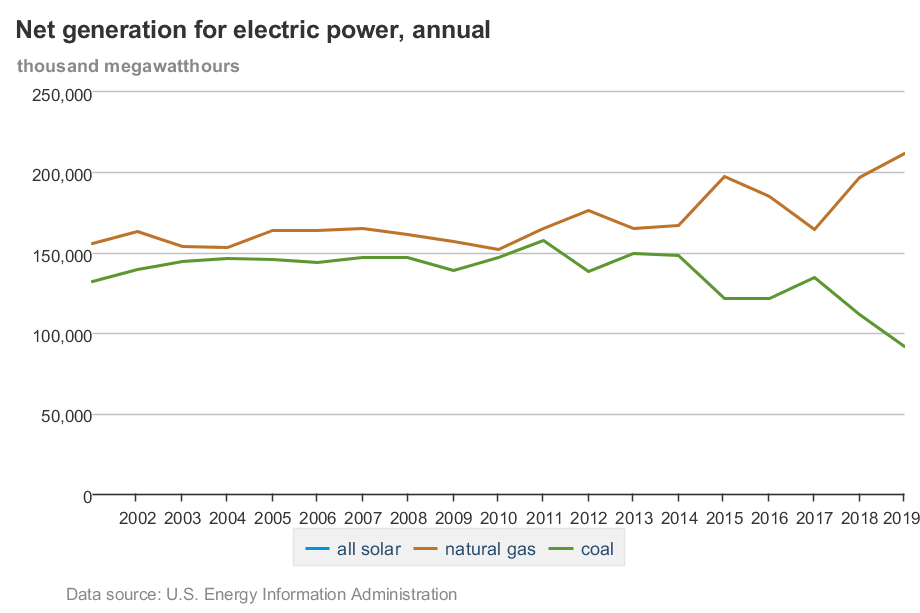 Well, it doesn't get any clearer than that. It certainly does look like solar is replacing coal in Texas, as one goes up, the other goes dow- wait, my mistake. The brown line is natural gas, not solar.

"Solar is booming"? No, solar is not booming, solar is not replacing squat. Solar is lying along the horizontal axis like a snake's belly in a wagon rut, going nowhere. In 2019, gas generated 211.7 TWh, solar generated "-", whatever that means. But it gets worse.

Assuming consumption is relatively flat, how could generation from gas increase faster than that from coal is declining? Because irregular renewable output forces gas plants to be operated inefficiently, gas plants end up creating more emissions than if wind and solar farms weren't there at all.

Maybe that's why in 2008 Sierra Club, always big on wind and solar, took $25 million in donations from Chesapeake Energy, one of the biggest gas drillers in the U.S. Maybe it's why Sierra Club's former executive director, Carl Pope, conveniently forgot nuclear when he claimed natural gas was the "next-cleanest fuel" after renewables.

If we needed another example of Sierra Club selling out to the highest bidder, it doesn't get any clearer than that.

"Solar is booming"? No, solar is not booming, solar is not replacing squat. Solar is lying along the horizontal axis like a snake's belly in a wagon rut, going nowhere. In 2019, gas generated 211.7 TWh, solar generated "-", whatever that means.

Always great when you put something out there Bob... Let's see how you do with solar and coal in TX over the next couple of years.

I like your idea about looking at EIA data for solar in TX.  EIAs April Electricity Monthly Report had Utility solar capacity at about 2,700 MW in TX - up about 800 MW or 35% Y-Y.

That report also lists out the projects that will be coming online in the near future. 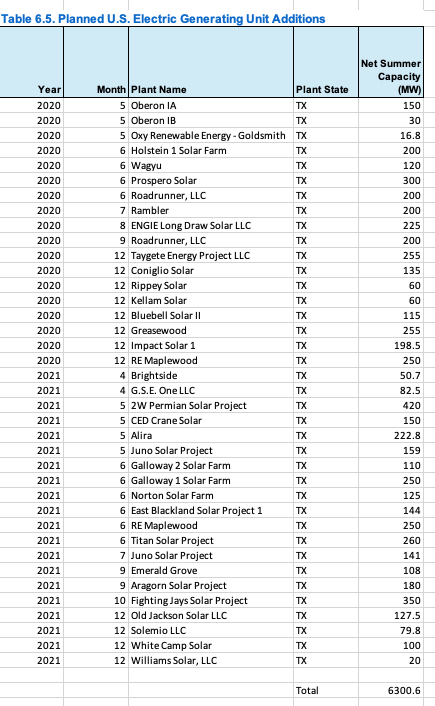 Yeah, but what about actual generation? We have ERCOT grid data thru June.

Coal down another 8TWh Y-Y and solar up 1.8TWh. Up 88% - seems like a "boom".  Wind also doing pretty well. By the way, also note the dropoff in generation from simple cycle NG plants.  I thought you said more renewables meant less NG efficiency?

Finally, let's look at another piece of data from EIA. A recent record day for solar in Texas. 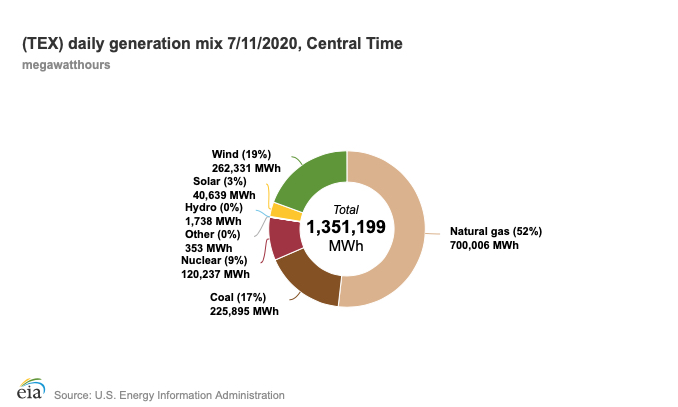 July 11th was the first day that Solar in TX passed 40,000 MWh of generation in a single day.

Sometime next year solar will pass 80,000 MWh in a single day. This added solar will eat into coal's slim margins in TX. Goodbye coal.

Below, your hyperbole with translation:

One chart tells the story of solar in Texas:

I'm pretty sure newbuild windpower is still cheaper than solar in TX (the NREL market reports usually come out late Summer), at least it would be except the Federal windpower subsidy ends this year I think.

But I think there is one upside of all the utility solar getting built there, which benefits the great majority of electricity rate payers: it gives the public utility commissions the data they need to limit net-metering and the expensive subsidy that it represents (in most places, residential solar is 2-4 times the cost of utility solar; basically, the economics are always driven by cost-shifting to other customers).

These are definitely fair things to point out, Nathan! I think when it comes to headlines and general excitement, you're seeing a lot of attention on the trends rather than the static numbers. Solar growing and starting to play catchup is as much the story as is wind being big in TX (mostly because wind has been big in TX for some time). It's why you won't see too many headlines touting amazing hydropower numbers in the Pacific NW-- that's great for total numbers, but it's really nothing new (and specific to hydropower, the trend is naturally limited and won't be increasing so there's not as much to talk about in that regard)

Yes, wind continues to grow at a rapid pace in Texas. However, here is why I think solar deserves the headline - "pushing remaining coal into retirement".

1) The added solar reduces coal at the margins.  The remaining 19GW of remaining coal ran at a 35% CF for first 6 months of 2020.  Solar will lower this further - making coal uneconomical.

2) Solar generation comes during the day whereas wind is stronger in late afternoon/evening so solar reduces need for coal during daytime.

3) Overall generation in TX has grown steadily over the last few years due to large rise in TX population and growth of electricity usage in energy sector.  NG and wind have had to do double duty - replacing coal generation AND supporting this increased demand.  Adding solar on top means that coal generation can decline quicker.

Expect a bunch of coal retirement announcements in TX over the next couple of years.

While installed solar power capacity in the U.S. has grown by almost 4,000% over the past 10 years, its growth rate across ERCOT has been even faster, with installed capacity increasing from just 15 megawatts (MW) in 2010 to 2,281MW at the end of 2019, a 15,107% increase,” Wamsted said. “ERCOT’s installed capacity could climb at a comparable rate this year, with current projections showing solar topping 5,800MW by the end of 2020.”

The % increase is a hard number to really track since it's going to be massive when you're starting close to zero, but that absolute gain is surely impressive. With as much land area and valuable solar irradiance as Texas has, let's see those numbers keep up pace

US Coal Prices are Way Up – Fuel Flexibility Can Help
Space Based Solar Power being developed by many around the globe. The US needs to lead.
Should Construction Companies Start Installing Solar?
Generation Guide: Monthly Digest of Insights Shared by Your Peers in the Energy Central Generation Network – September 16, 2022