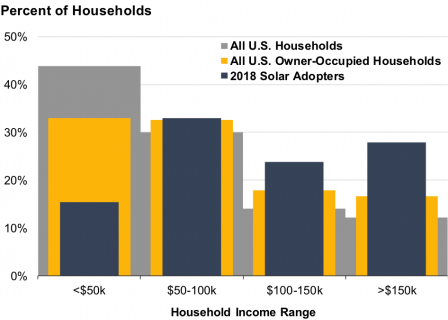 As the price of solar power falls, it is moving into the mainstream, increasingly being taken up by moderate and lower income Americans.

A new report by Lawrence Berkeley National Laboratory looks at income trends among 1.4 million residential rooftop solar adopters, representing the most extensive analysis of this topic to-date. Unlike previous studies, researchers used address-specific income estimates, rather than from the Census tract of the solar homeowner, providing more precise results.

In all, about 15 percent of solar adopters nationwide fall into the lowest income category, less than $50,000 of household income per year, while another third fall into the next income range, between $50,000 and $100,000.

Solar adoption has been gradually migrating toward lower income ranges over time, reflecting the spread of U.S. solar markets. For example, households with annual incomes of less than $100,000 grew from 39 percent of solar adopters in 2010 to 48 percent in 2018, while those with incomes of more than $200,000 dropped from 26 percent to 16 percent. Similar trends are evident within most individual states and counties as well. 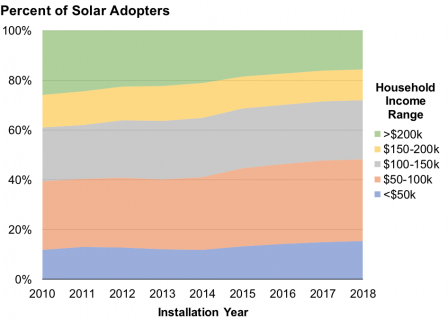 Solar adoption varies by state and local markets.  In Louisiana, almost 80 percent of solar adopters have annual incomes of less than $100,000. The portion in Wisconsin and Vermont is over 60 percent.

Some local variations are driven by policies and programs that specifically encourage adoption by low-income households.  State and local governments may offer extra incentives or financing for income-qualified buyers, for example.

The report, published in slide-deck form along with an accompanying set of interactive data visualizations, is available at solardemographics.lbl.gov.

The authors will also host a webinar highlighting key findings from this study on March 10 at 2ET / 11PT. Register for the webinar here.

Funding for this research was provided by the U.S. Department of Energy Solar Energy Technologies Office.

The Business Case for Solar and Wind Remains Elusive

Energy company executives must weigh a number of factors when deciding which generation technologies to invest in. While solar and wind tell a strong renewable story, they cost 60% to two times more than alternatives, according to the US Energy..

The Business Case for Solar and Wind Remains Elusive

Oh, great, your article provided me with useful information and a fresh perspective on the subject.

Dr. Amal commented on ...
Can Distributed Energy Resources displace the need for a transmission project?

I think no , but transmission can complement the intermittent renewable energy.