Natural gas, wind, and solar (GWS) continue to dominate the power generation sector in the United States.  Currently, the three resources account for more than 93% of all planned generation projects in the country.  The low cost of natural gas and the continued decline in the cost of wind and solar technology are the primary drivers behind the buildout.  The early retirement of coal-fueled capacity has also contributed heavily to the growth in natural gas power and renewables.

During the year, U.S. electricity demand declined modestly from a record high in 2018, while energy storage and offshore wind made significant strides.

Looking ahead to 2020, expect more hybrid solar/wind plus-storage project announcements as the power industry grapples with the complex problem of optimizing the ever-growing production of non-dispatchable electricity generation.

Unanswered questions surrounding the cost and benefits of managing intermittency through new sophisticated battery and other energy storage technologies will be center stage in 2020, as more and more carbon-free solar and wind capacity enters the market.

Along with the race to solve intermittency comes the complex issue of how organized power markets will deal with ‘market design’ that is becoming increasingly complex as states, power producers, and even corporations and cities set ever more ambitious renewable goals.  How the market operators, state regulators and the Federal Energy Regulatory Commission (FERC) optimize and resolve the market design conundrum will either clear the path for continued growth or risk slowing down the pace of progress toward a cleaner power future.

Along with resolving intermittency and market design issues, all eyes will be on the improving economics and the rise of innovative new technologies like carbon-free hydrogen, carbon sequestration, and other new innovative technologies not even thought of yet.  The windfarm repower market will grow as the first generation of turbines and towers begin to show their age.

Power industry investment has been at record levels in recent years. The Edison Electric Institute’s (EEI) Financial Analysis Group estimates that when the financial books are closed in 2019, utility industry Capital Expenditure (CapEx) will top $135.6 billion – that’s 13.5% ($16.1bn) higher than the previous record spend reported in 2018. The EEI forecast for 2020 is for CapEx to decline modestly with spend projected at $128.1 billion.

With overall customer electricity rates across the U.S. staying relatively flat, one can only surmise that it will be easier for utilities to secure rate base approvals, at least equal to the present, hence driving continued power industry investment.  During the two year period from November 2017 to November 2019, according to an analysis by Steve Mitnick, Editor-in-Chief of Public Utilities Fortnightly, the Consumer Price Index (CPI) for electricity rose only 1.08%, while the overall CPI for all goods and services rose nearly four times as fast, 4.27% – adjusted for inflation that translates into a monthly average bill savings of $3.04 on a $100 monthly customer bill.  With happy customers its considerably easier for regulators to approve larger CapEx budgets.

During 2020, we will see a new focus on high-voltage transmission and grid projects to better optimize all the new renewable capacity development happening across the country.  Additionally, the promise of significant offshore wind power development will require substantial investment in new high-voltage transmission and grid upgrades to realize the sector’s full potential over the coming decade.

The following 19 charts and captions highlight the most interesting trends and happenings from 2019 – sure to make more news in 2020. 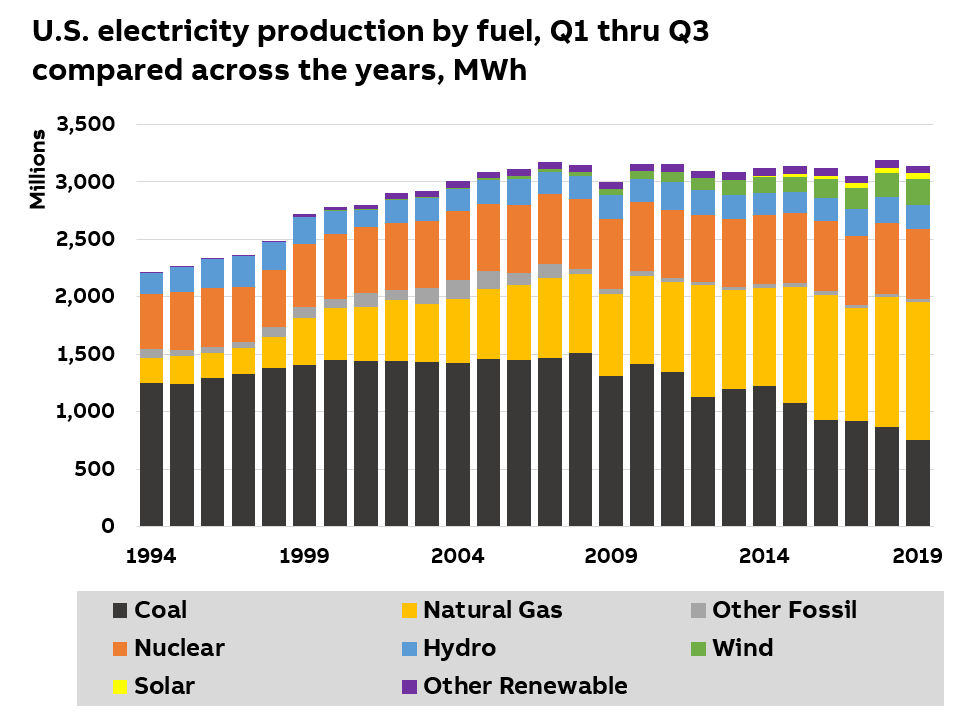 Natural gas continues to grow as a power generation fuel.  During the first three quarters of 2019, natural gas accounted for a record 38.2% (1,201.2 million MWh) of total U.S. power output.  That is the highest first three-quarter output in history for natural gas when compared to the same timeframe in previous years.

For the first time in history, wind outperformed hydropower during the first three quarters of 2019.  Electricity production from wind farms represented roughly 7% of all U.S. power production, the highest output (219.0 million MWh) ever – topping last year’s three-quarter total of 205.1 million MWh by 6.8%. 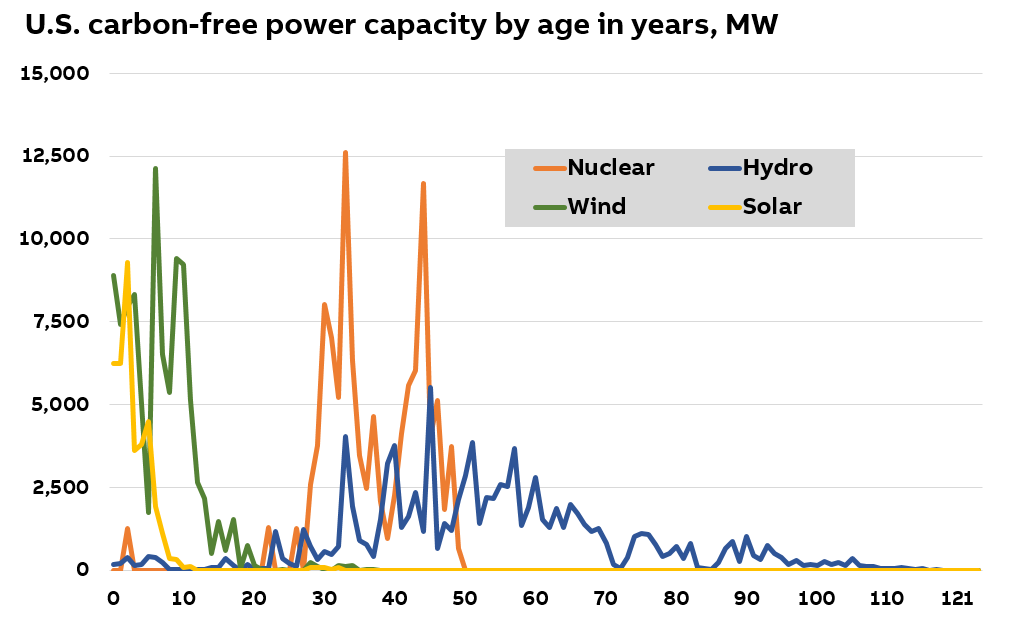 The largest sources of carbon-free electricity in the United States comes from nuclear (20%) and hydro (7%) power plants, most built thirty to fifty years ago.  Utility-scale wind and solar farms represent about 8% of the nation’s electric output. 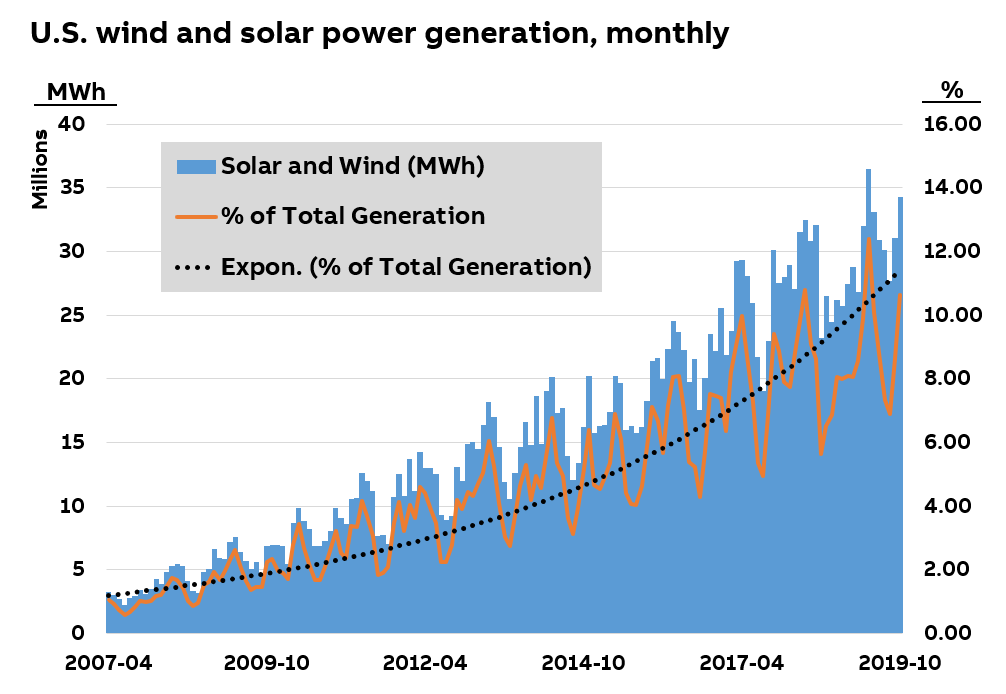 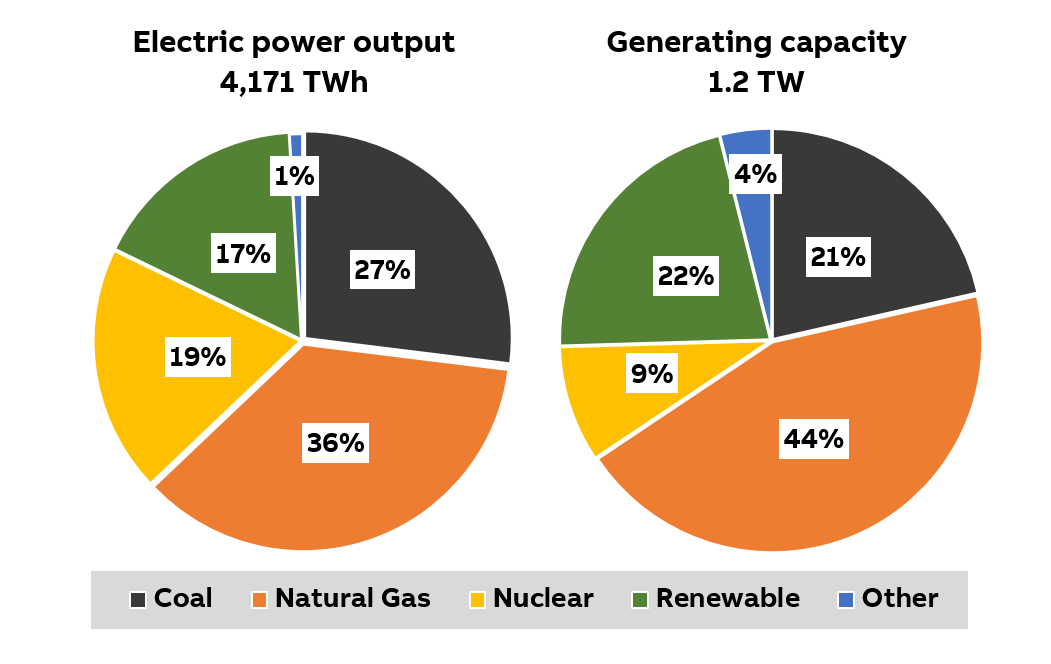 Wind and solar development have been riding a wave of investment driven by a combination of falling technology cost, customer demand, available tax credits, and state and local government renewable portfolio standards.

Since there are no significant coal-burning power plants currently under development in the U.S., the future bodes well for renewables to continue to expand their installed capacity lead over coal during the next several years.

5. The price of electricity might be America’s best deal 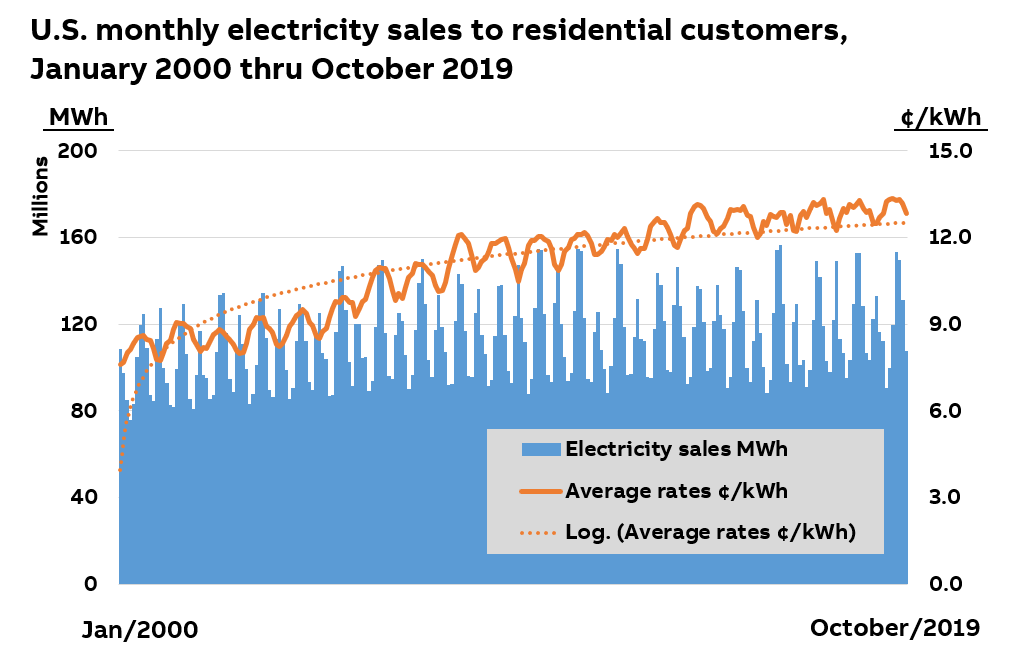 Over the past two years, the average monthly cost of electricity and the overall sales volume to residential customers has remained relatively flat and rates have declined relative to inflation. 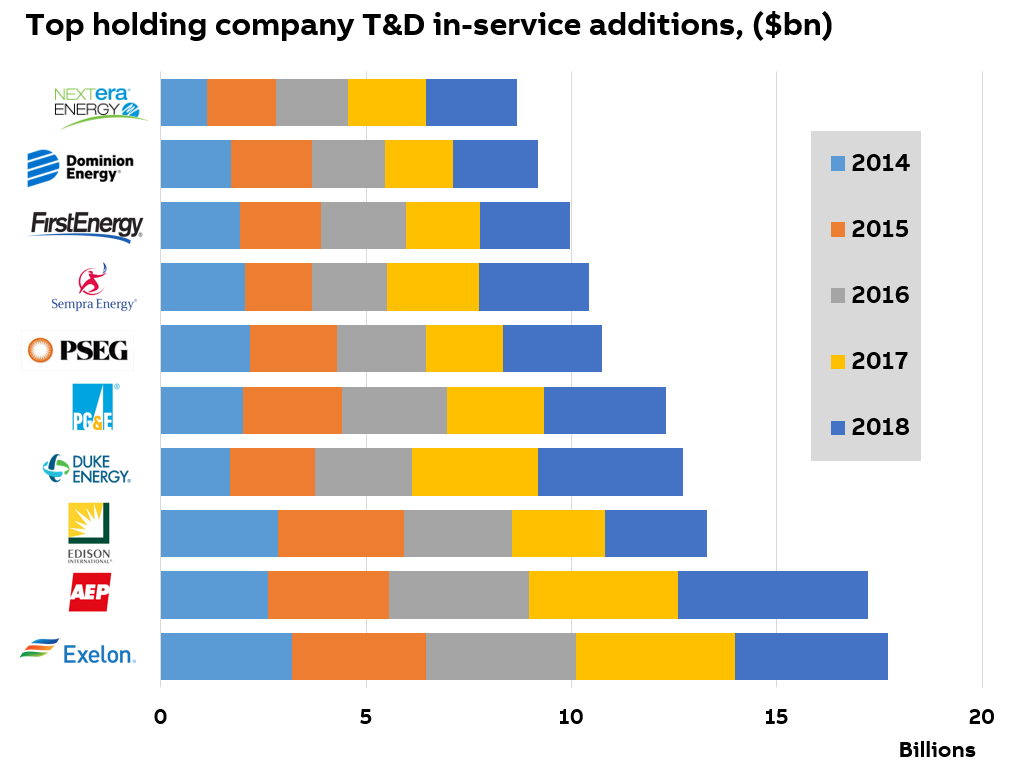 The top-10 investor-owned utility (IOU) holding companies reported a record $122.2 billion of T&D in-service additions over the past five years – that’s 53.7% of the $227.8bn reported by all holding companies.

The average annual growth rate (AAGR) in T&D for this group has averaged 9.1% during the period. 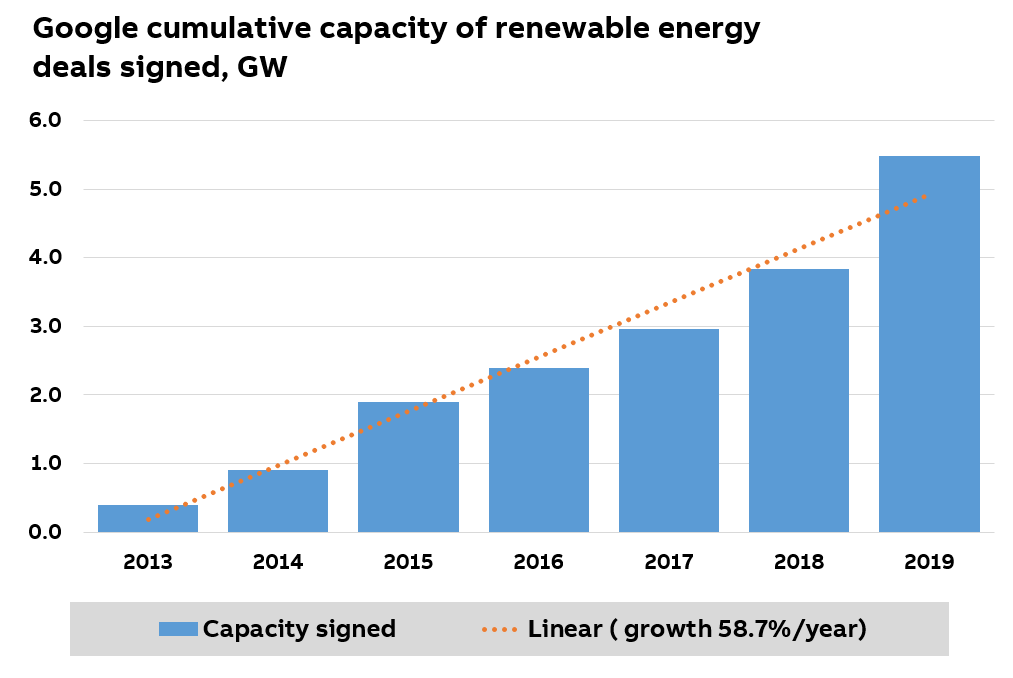 In 2019, Google became the largest buyer of renewable energy in the world at 52 deals equating to 5.48 GW worldwide.  According to the company’s September 19, 2019, news release, the new investments are valued at roughly $2 billion, bringing the company’s total investment since 2010 to about $7 billion. 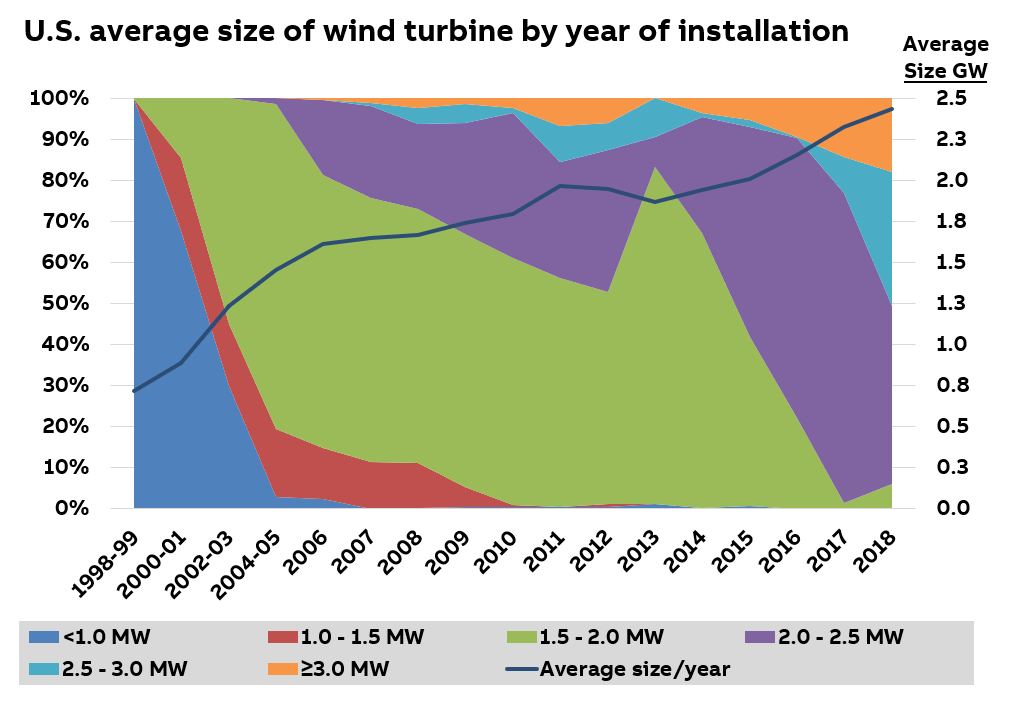 Today there are more than 57,000 wind turbines scattered around the United States.  Over the past two decades, the average capacity of installed wind turbines has increased dramatically.  Today the average size of turbines deployed is nearly 2.5 MW. 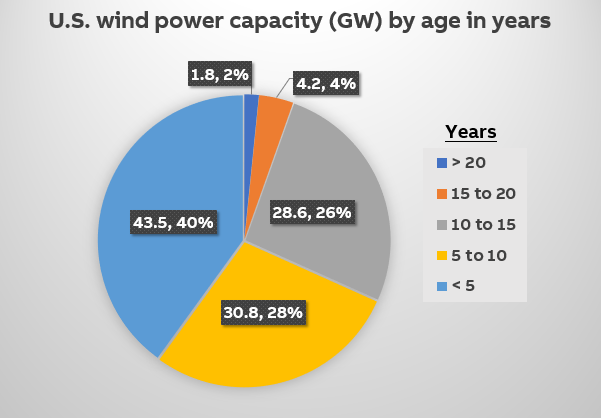 Repowering wind farms are set for rapid growth as nearly 1/3 of U.S. wind capacity is now 10 years or older, with another nearly 1/3 between 5 and 10 years in age. 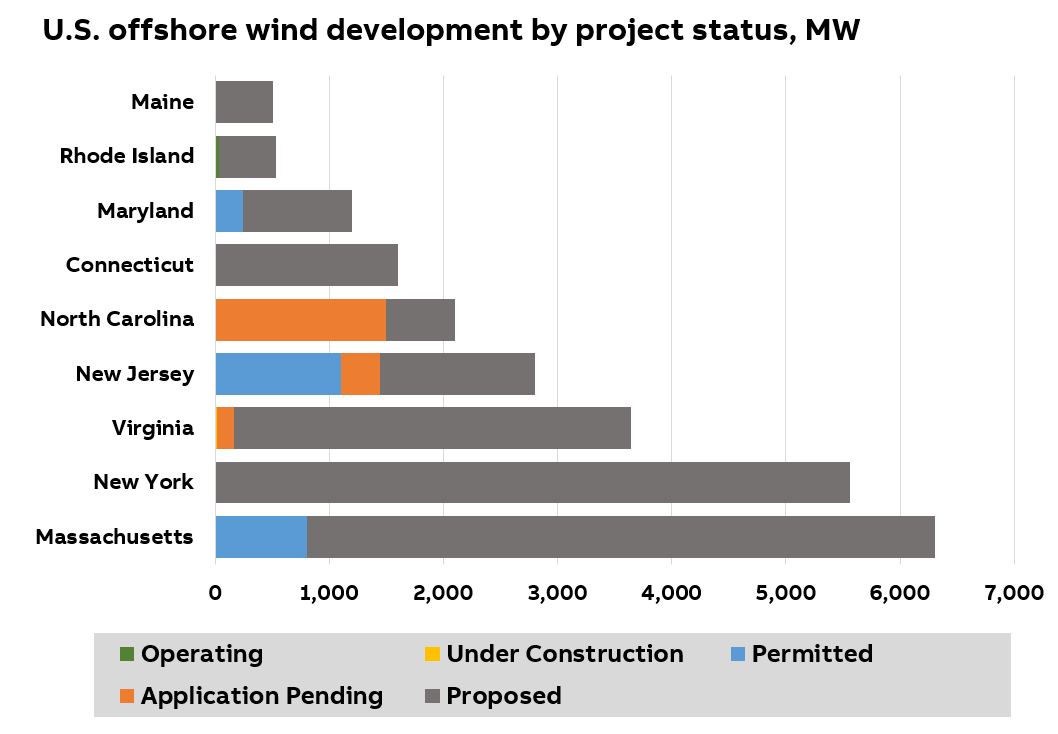 Driven by state-level support and commitments to purchase carbon-free wind energy by east coast utilities, some of the largest proven development companies in the world have begun investing heavily in America’s next big energy play – offshore wind.

Based on data compiled by ABB’s Velocity Suite research team, the eastern seaboard could be home to roughly 24 gigawatts (GW) of capacity by 2035.  Most of the projects are in early-stage development.

Currently, only 2.2 GW have met most permitting requirements, while about 2.0 GW have applications pending.  Most of the projects are targeted for operation (11.4 GW) in 2025, with Massachusetts and New York leading the way. 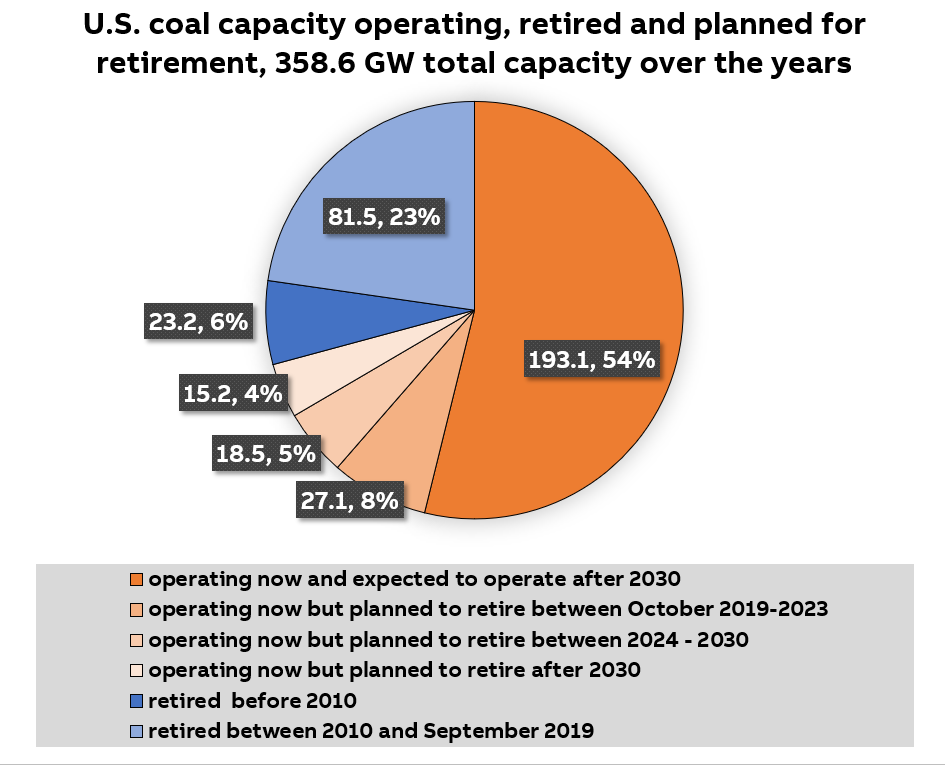 The large number of recent coal plant closures is being felt across most regions and numerous states across the country.  Today there are 253.9 gigawatts (GW) of operating coal capacity in the United States. 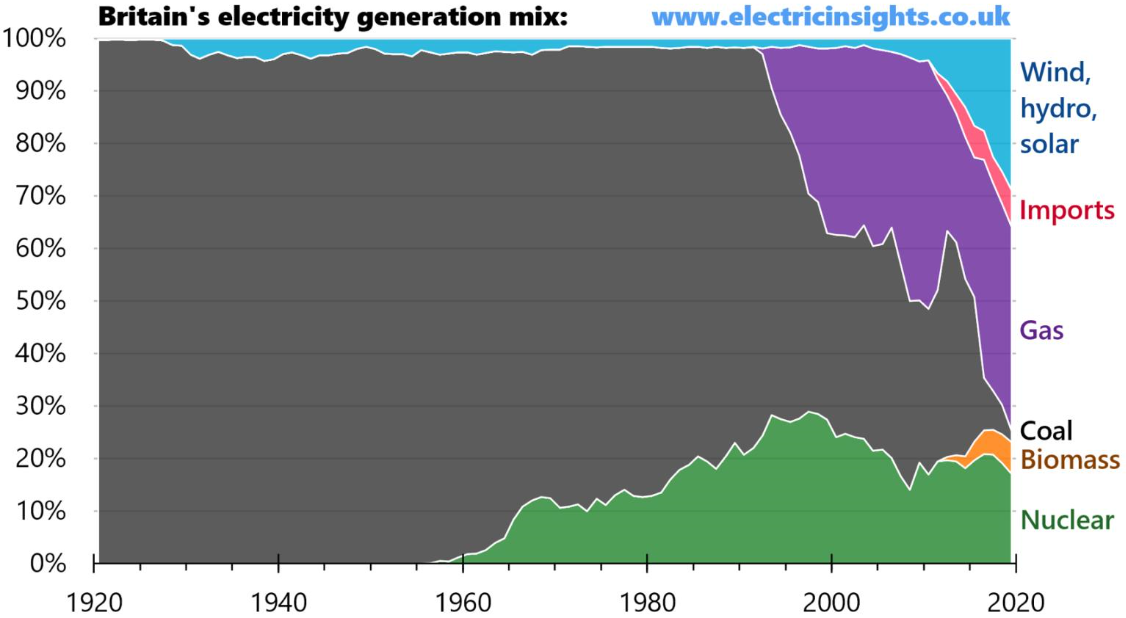 The combination of natural gas, wind, solar and hydro, plus more biomass and power imports has rendered coal nearly obsolete as a power generation fuel in Britain over the past two decades.

13. Coal production down but far from out 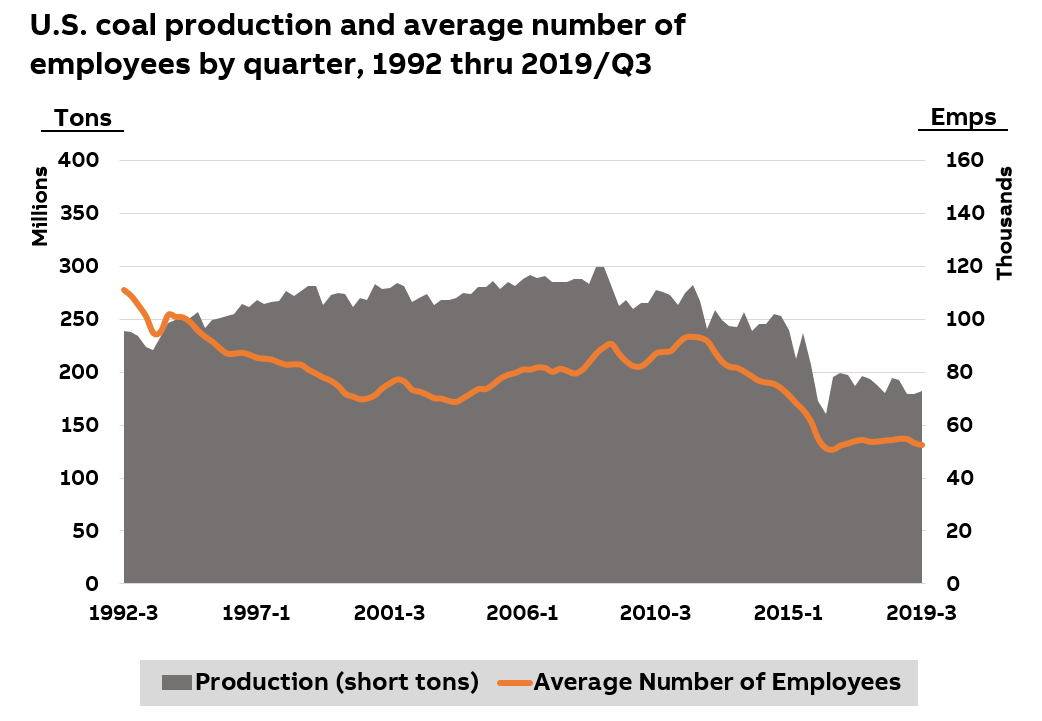 Growth in metallurgical and steam coal exports combined with the demand to meet the surviving fleet of coal-fueled power plants will be the key drivers supporting coal production over the next few years as coal producers face an ever-shrinking market.

Going forward it will be much harder to maintain coal production levels as larger, newer coal plants are retired.  This year (2019) marks the second-highest year on record for American coal plant shutdowns (14.8 GW), with 6.6 GW slated for 2020, and 1.7 GW in 2021.

14. When gas and coal jockey for position, fuel cost matters most 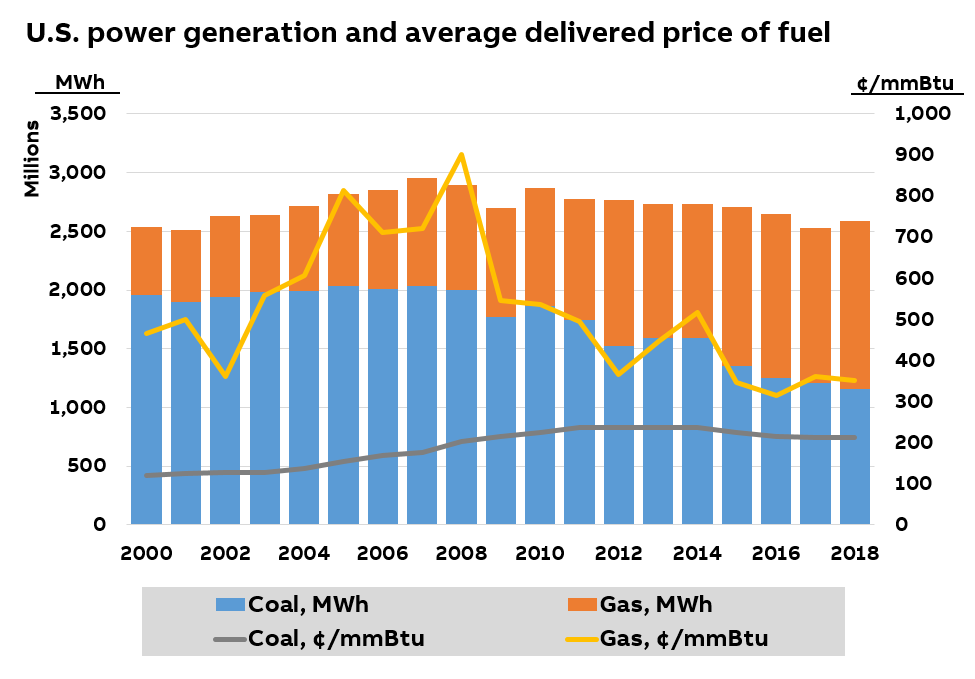 Since 2000, natural gas as a utility fuel has experienced a 1.5-fold increase in power generation.  During the same time period, even with 86.0-GW of coal plant retirements, coal generation has declined only modestly – less than 0.5-fold.  The remaining coal fleet is more efficient and able to produce ample amounts of energy when natural gas becomes more expensive.

15. The fastest-growing domestic market for natural gas has been power generation 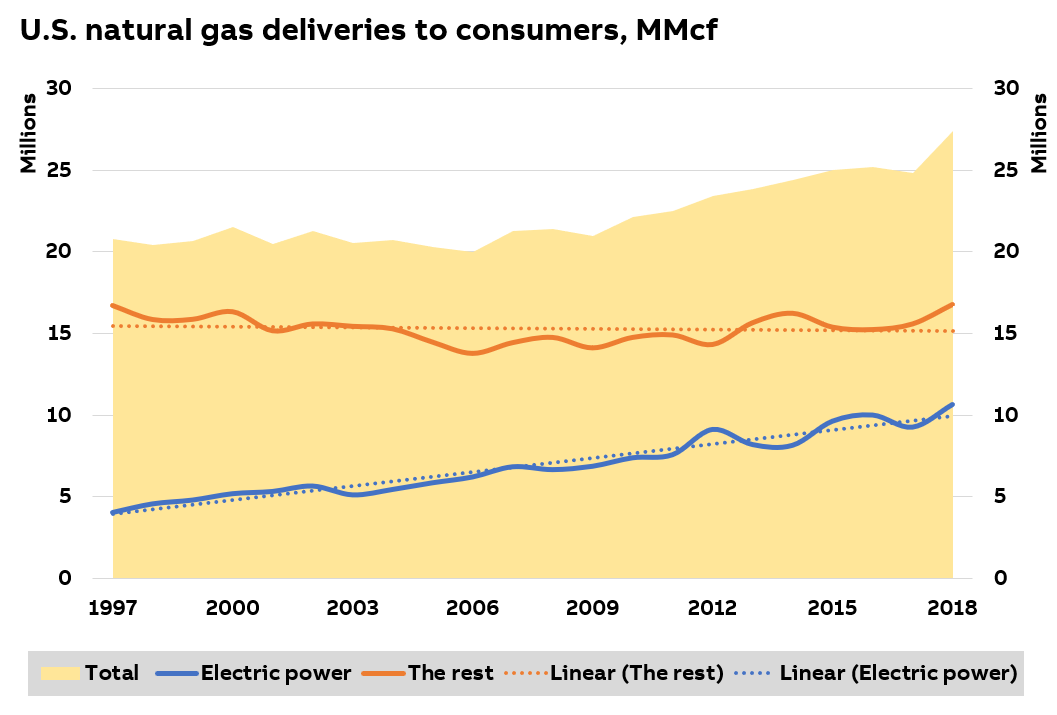 Over the past two decades, natural gas delivered to power generating plants has grown at about 5% per year while gas delivered to all other sectors in the United States including industrial, commercial, residential and transportation, has remained virtually unchanged.

Driven by growth in new capacity additions, depressed fuel prices, and weather extremes, natural gas as a contributor to electricity production has increased steadily through the years. 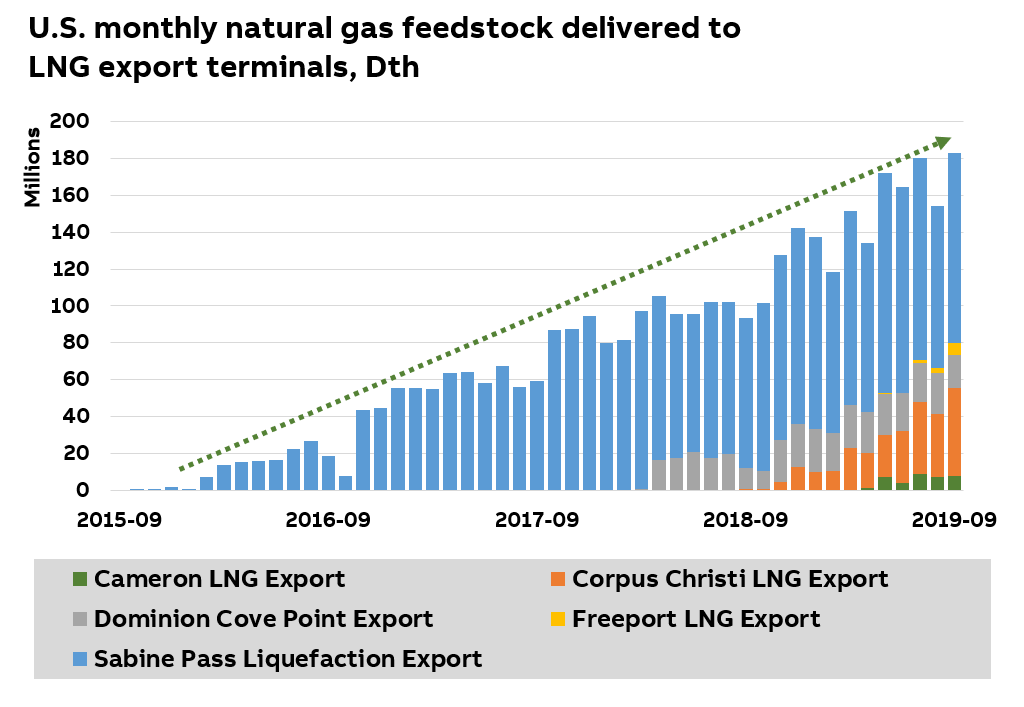 In a little more than three and a half years, deliveries of natural gas to LNG liquefaction export facilities in the United States has increased from zero to roughly 180 million dekatherms (Dth) per month, which calculates out to about 6 billion cubic feet per day (Bcf/d).  To put that in perspective, consider that 6 Bcf/d accounts for about 7% of all dry natural gas production in the U.S.

That’s a remarkable statistic given the short time frame the country has been exporting LNG.  And with new capacity continuing to come online, the growth in gas deliveries to LNG facilities is only expected to grow. 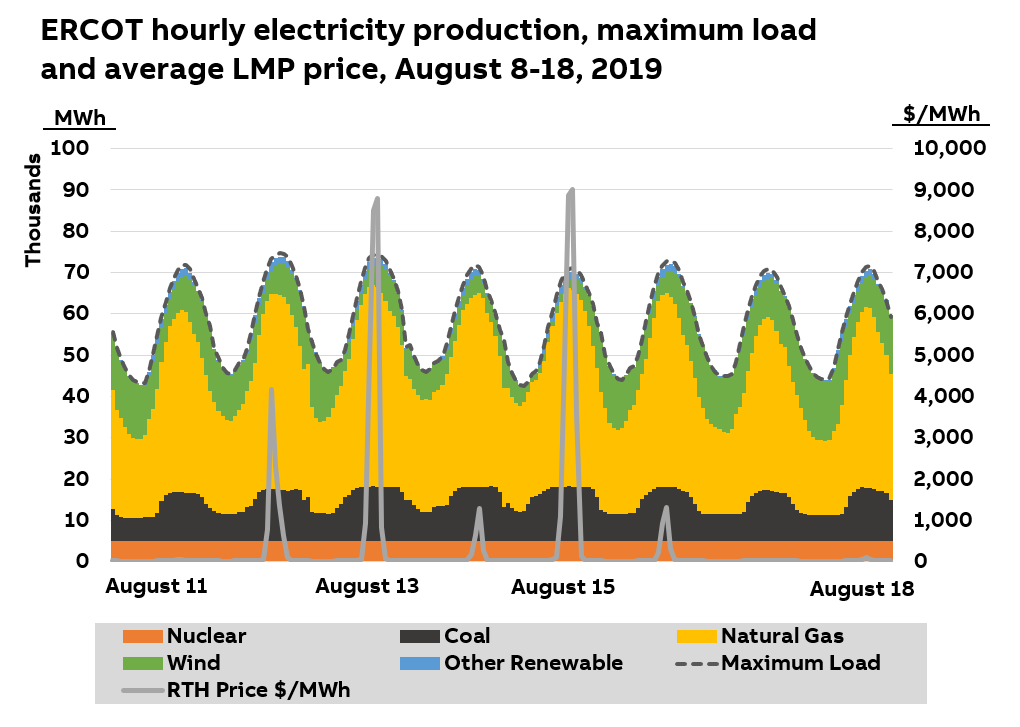 Driven by increased electricity demand to run air conditioners and other electrical devices, Texas’s organized power market, the Electric Reliability Council of Texas (ERCOT), was particularly stressed through most of August.

18. What if California solar power combined with Texas wind power? 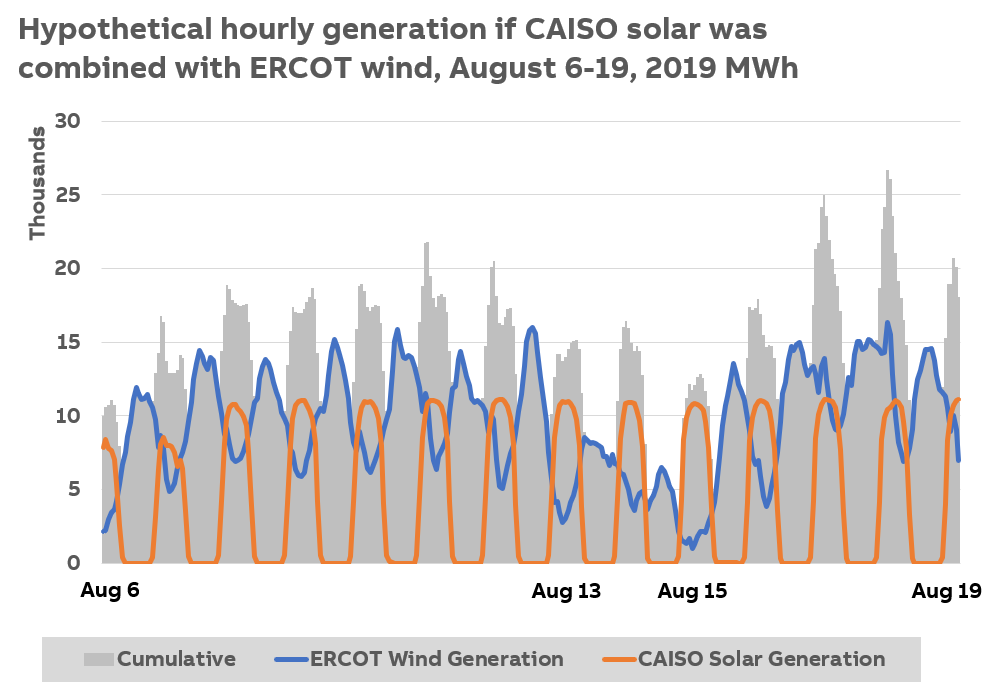 Could Texas have skated through the August heatwave without significant price spikes if the state had as much solar power as California has today?

Maximum daily peak hour in the ERCOT market over the two-week window topped 70-GW on every day.  Having nearly 10-GW of solar during the high load hours would have easily covered the low reserve periods when overall average locational marginal prices (LMP) were elevated. 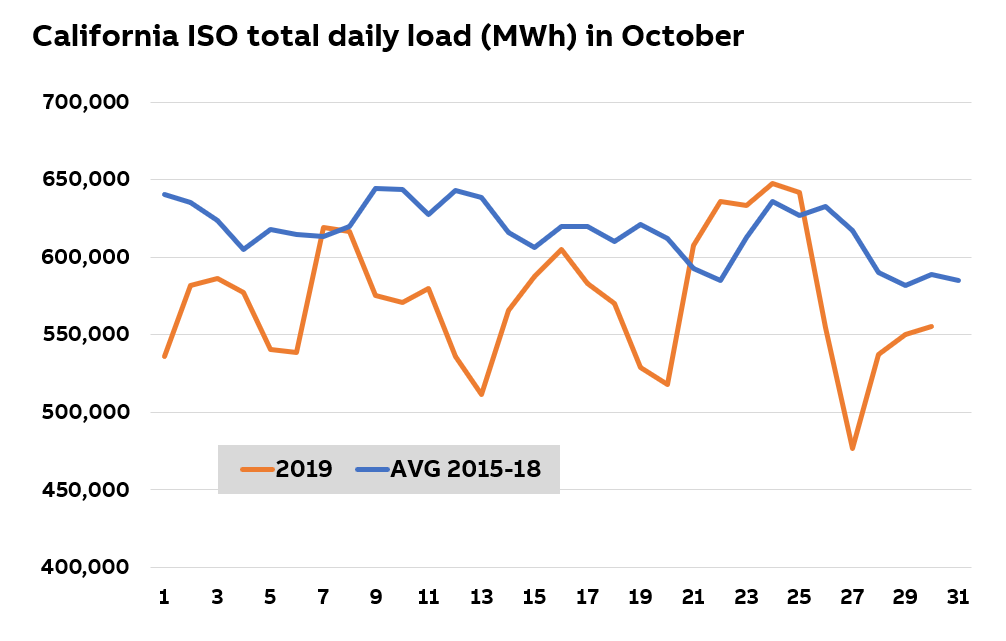 High winds and low humidity plagued most of the state of California throughout October, forcing some of the state’s largest electric utilities to shut down power for millions of customers.

The chart displays the total daily electric load across the California ISO in October, comparing days in 2019 with averages over the four-year period from 2015 through 2018.

Along with the introduction of numerous new and promising innovations in 2020, expect many of the same power market and industry trends displayed in charts above to continue.

How to solve the intermittency and market design issues will be paramount as the year evolves.  Along with these key technical and policy issues come a myriad of developments to keep an eye on, including new energy storage, offshore wind, and transmission project announcements – all geared to strengthen the American power grid for the next decade.

Source of all charts and data: ABB Ability Velocity Suite

Thanks for this thorough and detailed post Kent-- these types of visualizations are invaluable in telling the utility industry stories.

Thank you for this comprehensive and insightful article!