In celebration of ‘World Energy Day,’ it’s a great time to remember how important access to electricity has been to economic prosperity for the world’s population and how strongly related per capita income and improved living standards are to electricity consumption. It’s estimated that about 6.8 billion of the world’s 7.8 billion population have access to electricity today.  Unfortunately, that still leaves nearly 1 billion people with zero to minimal access to electric power – most live in Sub-Saharan Africa, where the World Bank estimated, as recently as 2017, that nearly 600 million people are living without electricity – something most of us simply take for granted.  Over the past three decades, the number of people able to access electricity has improved considerably.  As recently as 1990, only 71% of the global population had access to electricity.  Still, by 2016, that figure topped 87%.  According to the World Bank data, there are 120 million people with access to distributed solar.  Approximately 47 million are connected to microgrids –small-scale self-sufficient generation and distribution systems globally.

Most of the world’s population without electric power lacks the resources and economic means to develop large-scale grid projects, making the focus on lower cost, easier to manage microgrid projects a viable alternative.  Along with the potential to improve those without electricity, communities in remote locations, and businesses looking for more secure power supplies represent another growing market of perfect candidates for today’s sophisticated microgrid technologies.

Today’s hybrid-microgrids integrate renewable energy, storage technology, and robust grid-management software.  Driven by ambitious goals to decarbonize generation, smart hybrid microgrids can protect against cybersecurity threats and grid outages. Additionally, microgrids represent a solid option for businesses and enterprises like hospitals, police stations, and college campuses that benefit from having their own self-sufficient continuous flowing power supply systems to prevent everything from wildfires, storms, and other drivers of unplanned power outages.

Renewables to play a crucial role in future electricity market

Renewable energy development is by far the fastest-growing segment of the power industry.  Wind and solar PV is expected to garner the largest share of global power projects over the next 30 years.  In order to integrate a growing share of intermittent resources like wind and solar on the grid, it will take a wide variety of new technologies to balance energy supply, including the integration of battery storage systems.

According to the International Energy Agencies (IEA), World Energy Outlook, 2019 (WEO19), renewable energy output is expected to grow from 26% of power production today to roughly 44% in 2040.  Solar and wind alone are expected to grow from about 7% of total global electricity production to 24% in 2040.  Renewables overall are forecast to surpass coal power as soon as 2026.  In terms of new generating capacity, renewables are expected to account for more than 2/3 of all new additions over the next 20 years. 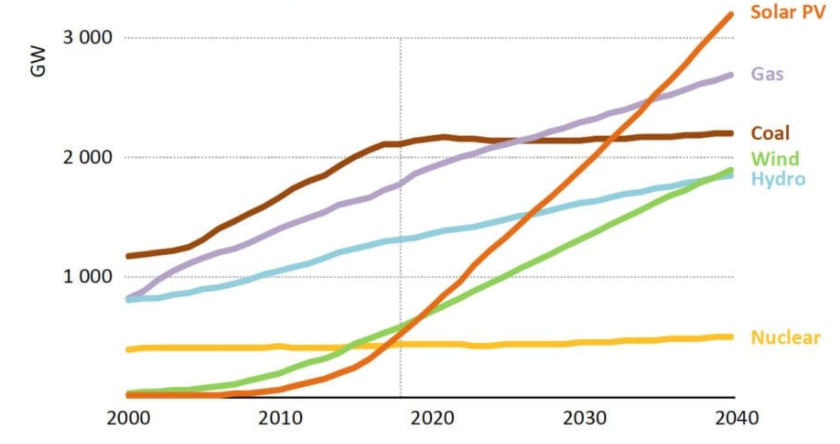 According to market intelligence and advisory firm Guidehouse, the global microgrid market is forecast to top $40 billion (20+ GW) by 2028 – that’s up nearly five-times from the estimated $8.1 billion (3.5 GW) market in 2019.

Projects that made a difference

In one of the world’s harshest climates, the town of Cordova, Alaska implemented a sophisticated hybrid microgrid system to reduce dependency on diesel fuel as their primary source of energy to generate electricity.  Relying on diesel generators and diesel fuel, which had to be imported by ship, was costly and environmentally hazardous.  Cordova Electric Cooperative, the town’s electric company, decided to invest in renewable power, including two new hydroelectric projects that today supply about 78% of the town’s power needs.  One of the key components of the microgrid plan involved installing a state-of-the-art battery energy storage system, which helps balance the power system when the run-of-river hydro projects are unavailable.  The storage system was needed to stabilize grid frequency when hydro-turbines are not generating power.  The hybrid microgrid system is performing so well that savings on diesel fuel are estimated to be between 40,000 and 50,000 gallons per year. The new technology makes the entire Cordova grid more self-sufficient and sustainable for electric generation as well as other local needs that might well arise like charging for electric vehicles and boats.

Last year, Odds Soccer Club with Skagerak Energi introduced a first-of-a-kind sophisticated hybrid microgrid combining rooftop solar PV, energy storage, and advanced grid automation to energize the Skagerak Arena in Skien, Norway.  The effort and goal, known as Skagerak Energilab, is to become the greenest soccer club in Europe.  The entire rooftop of the arena is covered with 5,700 square meters of solar modules.  The system not only lights up the arena under low-light conditions, but it also serves the neighborhood’s power needs.  The project incorporates a sophisticated energy management system that incorporates optimal load dispatch using load forecasts and PV production while simultaneously taking electricity price developments into consideration.

South Africa’s Robben Island in Cape Town set up a sophisticated hybrid microgrid to save up to 75% (600,000 liters) of diesel fuel per year.  The combined solar and battery energy system allow the island to power with solar energy up to nine months of the year.  Additionally, through the introduction of the modern microgrid technology, the Island of Aruba in the southern Caribbean Sea is on a fast path to becoming self-sufficient with renewables and biogas power supply.

Electrification driven by today’s sophisticated hybrid microgrid technologies has the potential to electrify homes, villages, and countries across the globe that are currently without or have limited electricity access.  Along with these underdeveloped regions of the world that lag in economic prosperity, other remote locals and businesses can benefit from the security that comes from hybrid microgrid systems that incorporate both off-grid and grid-connected renewable power, energy storage, and advanced power management technologies.    The expansion of electricity as a future energy resource is certain. Along with continued growth in microgrids, other electrification efforts in improved transportation, energy storage, and more efficiently run cities, buildings, and businesses are indicative of the changing landscape of the electric grid as it evolves from the era of fossil fuels to the era of cleaner energy.  Happy ‘World Energy Day’ 2020.

With this announcement the list of TX coal closures continues to grow.  Currently there is still about 17.4 GW of coal capacity left in TX and half of this capacity now has an announced closure date.What would it take to shutdown all of..