Lili Francklyn has worked in renewable energy, utility and climate-related marketing communications positions for over ten years. She is currently Editor of the Microgrid News at HOMER Energy by...

“Just Say Yes” is a philosophy that has guided the PITT OHIO trucking company since its founding in the early 1970s. Continuing the tradition of his grandfather who provided transportation services at the turn of the century with a horse and buggy, PITT OHIO President Chuck Hammel III has always been searching the horizon for innovative ideas – in customer service, people management, and technology.

PITT OHIO’s ground-breaking investments in clean energy and energy efficiency are in keeping with that tradition. A personal passion of Hammel’s, PITT OHIO’s sustainability focus has led to construction of LEED standard buildings, the installation of renewable energy resources at multiple sites, and most unusually, two microgrids, one of which powers a building that operates mainly on direct current (DC).

“We understand the impact our trucks have on the environment, the economy, and our communities, and we are committed to sustainability today, tomorrow, and well into the future,” says Hammel. 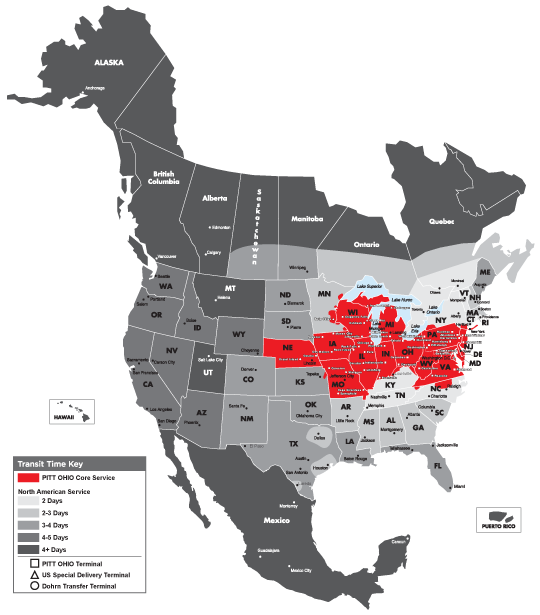 A trucking and logistics company serving the mid-Atlantic region, PITT OHIO operates twenty-one freight and trucking centers across multiple states, and has revenues of over $800 million. The company has traditionally been a “less-than-truckload” carrier, transporting relatively small, highly customized freight loads. Although PITT OHIO now provides a full range of trucking services, its past focus on customers with specialized transportation needs has led to an agile mindset that influences PITT OHIO’s approach to everything, including cost control and energy.

According to James Maug, Director of PITT OHIO’s Director Building Maintenance and Property Management, the company’s microgrids and efficiency projects saved the company over $265,000 per year in utility costs (for both water and electricity) between 2010 and 2018.

PITT OHIO first embarked on a project in New Jersey that took advantage of the state’s generous renewable energy incentives, building a grid-tied solar project. Then the company turned its attention to Harmar, a freight terminal outside of Pittsburgh where it engaged the help of University of Pittsburgh professor Dr. Gregory Reed and his team of engineering students at the Swanson School of Engineering to design a hybrid renewable energy microgrid. 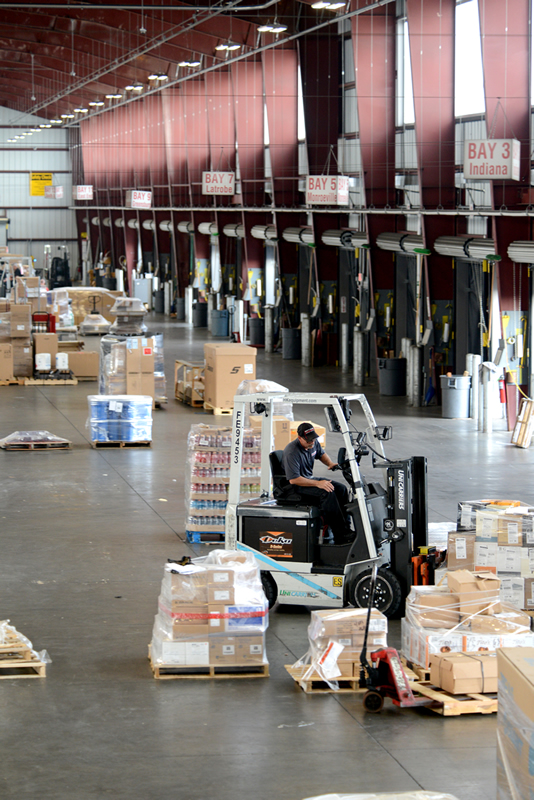 Reed and the team developed a pioneering strategy to use renewable energy and direct current to power certain types of loads at the freight terminal. In the process, Reed and his students collaborated with the owner of WindStax, a manufacturer of vertical turbines conveniently located nearby, and systems integrator Sargent Electric. “When Harmar was first completed a few years ago,” Reed says, “it was the first DC-integrated project in the US that was powered by a hybrid renewable system – including wind, solar, and batteries.”

“To start with we were going to do a data center, but the LED lighting was the larger load,” says Maug. “In trucking we have huge spaces that are well lit but not heated or cooled, and 48,000 square feet requires lots of kW for lighting. Then in this terminal, we also put in electric forklifts and tow motors.”

Maug agreed with Reed that powering the building’s biggest loads with DC current could be the innovation that would make the system pencil out financially. Using direct DC systems can save money by reducing inverter costs and avoiding losses that occur when converting power from DC to AC. Maug explained that given the types of loads, the Harmar facility was especially well-suited to DC power. 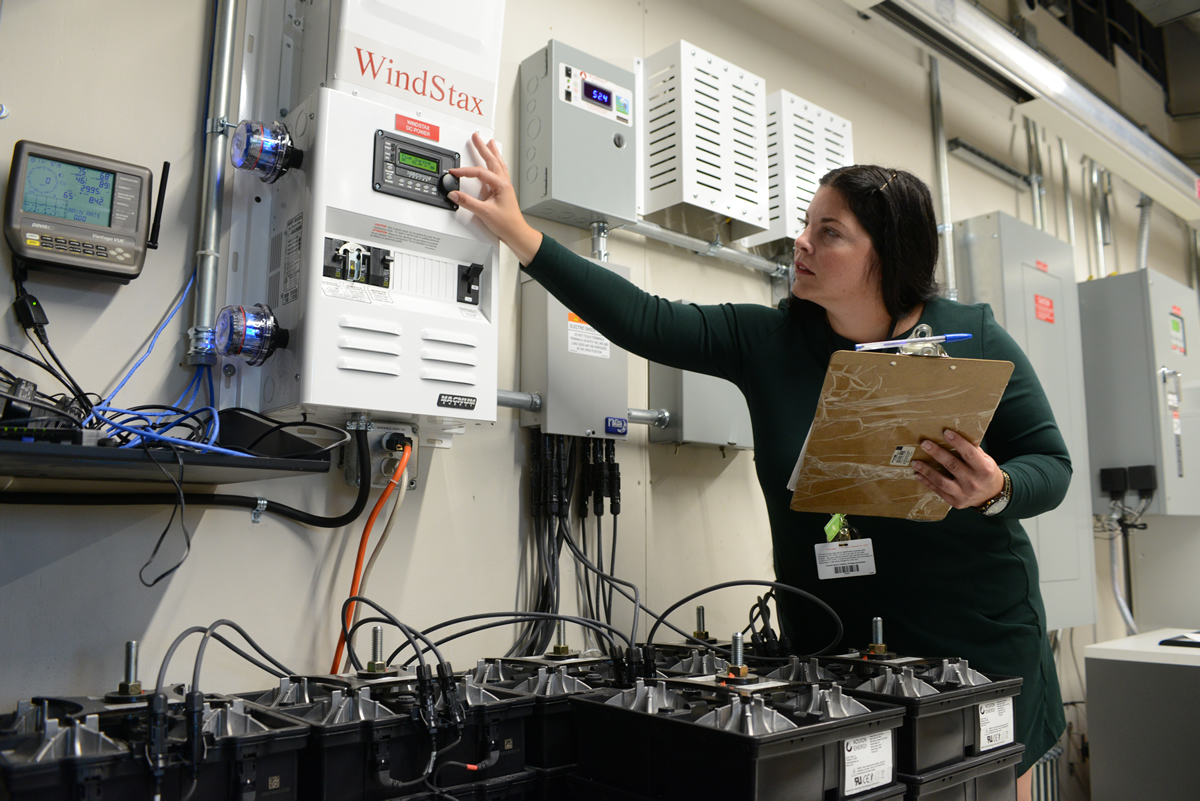 Inside the microgrid laboratory at Harmar

Harmar’s microgrid is rated at 70 kW, with a normal average load of about 7 kW. It’s powered by a 50 kW PV system, two 12 kW wind turbines, about 80 kWh of battery storage, and backup generators. Though it’s grid-connected, Harmar is a true microgrid, with the capability to island and continue functioning independently if the grid goes down. In summer it sells more surplus renewable energy back to the utility than in winter, and it uses supplementary grid power for a few hours at night to meet its loads.

Aside from reduced environmental impacts, company representatives say employees appreciate the electric forklifts, which cut down on air pollution and noise, leading to a less stressful working environment. Other LEED improvements include design for maximum day lighting, low-flow water systems, the use of paint and furniture that minimizes off-gassing, and locally sourced architectural materials.

Rendering of the new Parma terminal with microgrid: WindStax turbines on right

PITT OHIO replicated the general solar and wind power plan from the Harmar project in order to build another microgrid for the new Parma terminal near Cleveland. Reed’s team used HOMER Pro to model the optimal system configuration. The company enhanced the larger Parma microgrid by installing eight 60’ wind turbines and 1500 rooftop solar panels (50 kW of PV) to store 1 MWh in the facility’s microgrid. The system will generate 540,000 kWh of electricity annually to be stored and consumed on-site with the excess sent to the local utility grid. “This system will generate enough electricity to power a community of 52 average US households and offset 421 tons of carbon dioxide annually,” says Justine Russo, PITT OHIO’s Director of Sustainability.

According to Jim Maug, “The Parma project takes DC all the way to the plug. The power flows directly to the LED lighting and other loads, such as the batteries that power the electric forklift and USB plugs in the wall for computers.” The University of Pittsburgh electrical engineering students are very much part of the team as they were on the Harmar project. They continue to use HOMER Pro to model the microgrid and check on the system’s performance monthly. 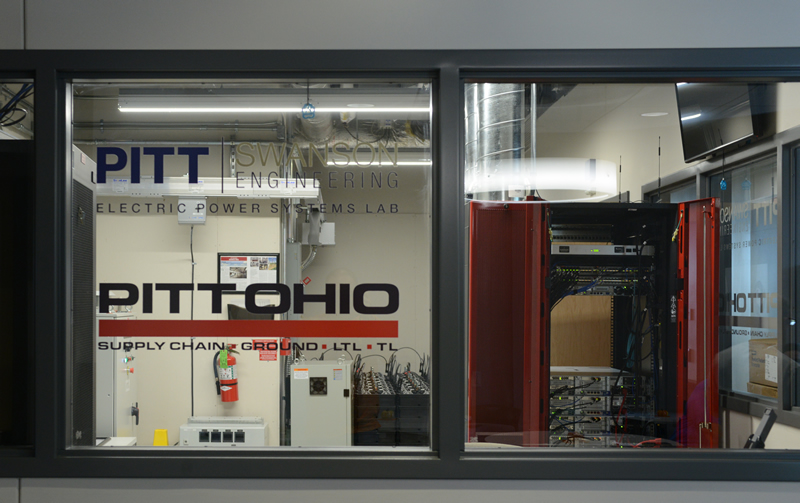 The University of Pittsburgh engineering lab at PITT OHIO

What about electric trucks?

When it built the Parma microgrid, PITT OHIO also developed a portion of the infrastructure for electric charging of the heavy truck fleet. But, Jim Maug cautions that it will be some time before heavy electric trucks penetrate the transportation market. “We are learning a lot from powering electric forklifts and tow motors with our current microgrids,” he adds, “but there’s a lot of research that’s needed still.” Heavy vehicles have huge power demands, which presents unique challenges. PITT OHIO is now using light-duty electric trucks, charging them at the Harmar facility, and evaluating their performance carefully.

Meanwhile, PITT OHIO will continue to experiment and explore new innovations in sustainability, and energy in particular. “What may have started out as good business practice has transformed into a successful sustainability platform focused on People, Planet and Purpose.” says PITT OHIO President Chuck Hammel. “When we take on any new project to improve our company and the planet, we consider all three pillars of our sustainability platform,” he adds. “The same was true when constructing these new terminals in Pittsburgh and Cleveland,” he continues. “These facilities give our people a safe, environmentally-friendly place to work. They further our commitment to the planet and reducing our carbon output through renewable energy and fuel efficiency. They solidify our purpose as an innovative organization that aligns with various organizations committed to improving sustainability for future generations.”

About HOMER Energy
This content was provided by HOMER Energy, the developer and distributor of the HOMER software, the global standard for energy modeling tools that analyze solar-plus-storage microgrids and other distributed energy projects. HOMER software determines engineering and economic feasibility by simulating complex off-grid and grid-tied distributed energy systems that combine conventional and renewable power, storage, and load management. Learn more at www.homerenergy.com, and read more content like this at www.microgridnews.com.