image credit: design for a tidal turbine from Alstom

A massive source of energy laps at our feet, but this clean, renewable power is not being brought on stream in anything like the amount it should. I am talking about marine energy, blue energy or water power. Using that term instead of “Wave and Tidal Power” is more inclusive. There are lots of different ways to harness this energy: micro hydro turbines in rivers, wave and tidal power at sea, tidal lagoons, ocean thermal gradients. Even putting small turbines on bridges to generate some extra electricity.

In 2021 the US Water Power Technologies Office (WPTO) examined the following resources in its report Marine Energy in the United States: An Overview of Opportunities:

It came up with the following total: the technical resource (i.e. the total capacity that could be realistically extracted, ignoring costs and regulations) could amount to 2,300 TWH/year or 57% of total US electricity consumption, that is, enough to power 220 million homes.

Obviously this is without looking at the practicalities. Alaska and US islands have great resources, but getting them to where they are needed would be costly and difficult. 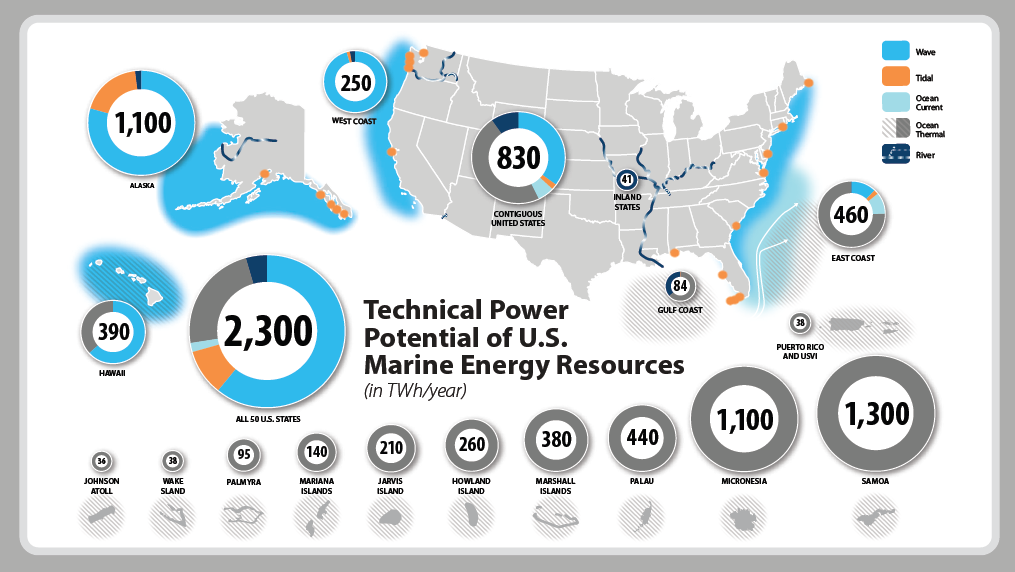 However it shows that blue power is a really valuable asset and should be utilized in the fight against climate chaos that we face. One of the major benefits of a lot of this type of energy is its predictability: tides come in twice a day, in contrast to wind and solar. Water is more dense than air so turbines produce much more power per unit. The disadvantage is that salt water is corrosive. The best tidal streams are far away from population centers. This makes maintenance costly and difficult.

This is putting turbines either on the seabed, or anchoring them as a floating resource in the fastest tidal race. This is the most mature technology: around the world several tidal arrays have been working for years, providing electricity and helping engineers overcome the challenges.

This is a well-proven technology. France has had a functioning tidal lagoon at La Rance since the 1950s. More recently a consortium proposed several tidal lagoons around UK shores which could have generated up to 10% of the country's electricity. Despite a favorable report, the conservative government canned the proposal, for unknown reasons.

These could be a plentiful source of energy. Some detailed modeling has been performed for tidal arrays around Florida, and also off the North Carolina coast. However, understanding currents is complex, and more research needs to be done.

This is more of a theoretical resource. Although the differences in temperature at different parts of the ocean could supply a lot of energy, harnessing it could be difficult and there isn't much in the way of pilot projects as yet.

A 2012 DOE-funded river resource assessment looked at more than 71,000 river segments throughout the United States. Micro-hydro run-of-river turbines are usually small, and can be operated and maintained relatively easily, so this is a rich resource waiting to be tapped.

Several countries with excellent marine power potential are moving forward with the technology. As stated above, the USA has a top quality resource. Other countries include Australia with its long coastline, South Korea, China, and the UK. Britain has the potential for a fine blue energy resource and has the European Marine Energy Center (EMEC) located in the north of Scotland for testing and refining designs. As with many emerging technologies, marine energy needs government support, capital investment and a proven design before it can be rolled out at scale, and the industry is not quite there yet.

Julian, Water is powerful and all around us. I have been trying to get my Arizona Government entity not for profit SRP Salt River Project to upgrade the turbines in their 7 large dams that are over 50 years old. I feel they could produce twice the power they do now by changing them to new more efficient equipment. This would work well with the daily Solar power they also get since hydro is 24/7 power all year long.

That sounds like a sound project. The capital costs of the old turbines are long gone: it would seem sensible to upgrade them. Good luck with that! :-)

The ocean is a pretty tough place to build generating facilities. Rivers are also not easy places for energy facilities. Throw in environmental regulations as well as wildlife impacts and costs ballon up to very high levels.