Everyone is probably familiar with natural gas which is generally regarded as a fossil fuel and rightly so. Massive deposits of natural gas whose chemical composition is primarily methane and other hydrocarbons and compounds were formed over millions, if not, billions of years in the Earth's crust. This resource was created when billions of tons of ancient microscopic life were deposited at the bottom of oceans and subjected to considerable temperatures and pressures. Over eons, these substances were converted into what we now refer to as "fossil fuels" which generally include oil, natural gas, etc. It is notable that the formation of these fuels took millennia. Consequently, replacing these fuels is not easily achievable unless one can devise a means for accelerating reactions that require geologic timescales concomitant with the application of copious levels of heat and pressure. Sustainably replacing Nature's processes seem daunting, perhaps even impossible. Or is it?

A cadre of dedicated professionals, The Coalition for Renewable Natural Gas, is advocating for the adoption and proliferation of the use of renewable natural gas that is usually generated using some form of a biochemical process that uses anaerobic digestion.

So just what is "renewable natural gas"? Here's a hint. It's the same chemical fuel (methane) but made using a different production process.

Both processes make the same compound using biomass feedstocks. So why is methane considered a fossil fuel with one process but labelled as a renewable with another process?

The answer is time. Using microbial processes enables one to leverage enzyme chemistry. Enzymes are an elegant means to effectuate and hasten chemical reactions.

OK. We get it. Biochemistry makes methane more efficiently than geochemistry. Now what?

The RNG manufacturing strategy has to consider the following basic elements that consider:

Logistics and other basic manufacturing considerations are fairly similar in the process industries. The focus will be on the other two aspects of RNG Manufacturing Strategy when RNG is made using anaerobic digesters.

The Significance of Biomass as a Feedstock for RNG Production

Biomass is broadly defined as any material that is produced by the growth of microorganisms, plants, or animals. Biomass is readily converted to RNG, fertilizer, and water using bioconversion systems. Biomass feedstocks have the added feature of being able to be a "multi-tasking" renewable resource. These materials can be processed to create renewable energy, fertilizer, and water. This multi-tasking feature gives an advantage to bioconversion systems because the adroit design and operation of these processes enables a user to create multiple renewables, energy, water, and fertilizer, from one feedstock using only one process. Many renewable systems are designed assuming the production of only one renewable product. The economic integrity of these projects is such that a developer has to "bet the farm" on the resilience of one renewable product.

Consequently, a "one product" renewable initiative can have deleterious implications for project financing efforts since all revenue hinges on one price point.

In contrast, a biomass feedstock can be processed to make multiple green products:

There is growing need to manufacture the base bellwether fertilizer compounds, such as ammonia hydroxide, phosphoric acid, etc. organically using renewable feedstock. Without availability of organic versions of these compounds, industrial-scale production of organic food is less realistic. 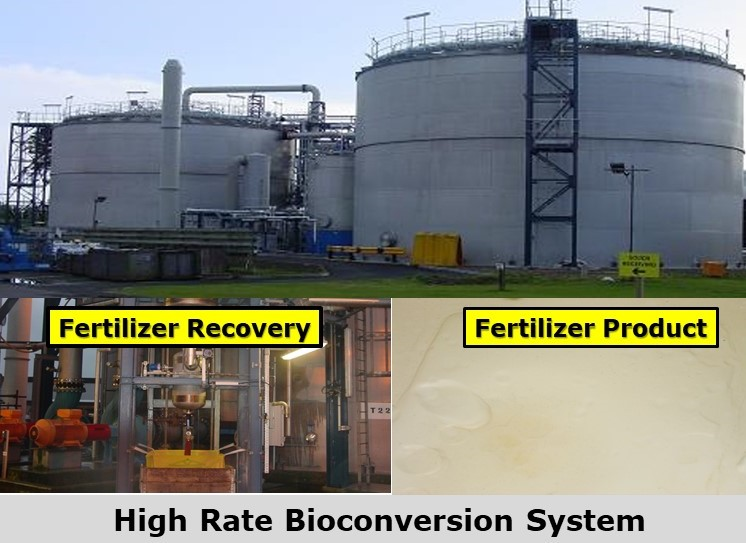 Production Multi-Tasking and Commercial Viability in the New Era

"Greed is good." Never were words more timely in the renewable and environmental space.

However, it is suggested that, as John-Paul Rollert put it, listen to your inner voice that tells yourself, "Yes, greed is good, but can’t we do better?" Of course, we can.

Renewable resources and products are no longer a "nice thing to do." They ARE "the thing to do." Advocates in the trenches should proceed with unbridled vigor without having to kowtow for consideration. Renewable resources and products are here to stay. There is no more need to kowtow. Sustainability and economic forces have spoken. This is not a government mandate. It is the confluence of trends for human population growth combining with increased levels of societal functionality making fossil fuel and other associated resources more expensive because of their finite supplies. Gordon Gekko would appreciate this straightforward logic.

The Age of Renewables is so named because a renewables-driven economy is being thrust upon us. Arguably, a version of Gordon Gekko that brings a vaulting ambition for a sustainable economy but one that supplants his inner demons with a sustainability gravitas and ethos may be just what we need.

Production multi-tasking is really about commercial viability which is heavily related to project financing. Love it or hate it, the reality is that without financing, the renewable economy will stall. Deal with it. With multiple renewable products, there is flexibility in crafting a value proposition that has robust financing characteristics and that also mitigates investor risk.

For RNG projects using biomass as a feedstock, there are a plethora of renewable product options.

Project financing is often the major impediment for proliferating renewable technologies unless there is government intervention or the presence of a savvy, intuitive financier.

Been there. Done that. Have way too many T-shirts.

By embracing the funding conundrum and recognizing that your project has the economic and fiscal gravitas to produce a plethora of renewable products, one creates a juxtaposition and turns the "financing problem" into an opportunity to close a project. With multiple off-take contracts now possible, the cadre of potential funders has significantly increased. These parties may need one or more of the renewable products. Many potential funders have other commercial interests which call for a renewable product in lieu of a fossil fuel product. Those commercial interests can gestate an interactive discussion with the project development team. The discussion is largely catalyzed by the fact that renewable initiative is using a multi-tasking feedstock in a process that can produce a diverse menu of valuable renewable products.

Current Status of RNG Production in the US

A database that provides data for RNG production systems in the US is provided through the Argonne National Laboratory.

In 2018, total annual RNG energy production was about 46 million MMBTU which averaged about 517,000 MMBTU per project for 89 projects. This equates to 1,416 MMBTU/installation/day.

The current situation for RNG in the US is a mixture of good news and bad news. The good news is that a report by the Bates White Consulting Group shows that demand for RNG will be significant largely due to the transportation sector. The bad news as noted by M. J. Bradley & Associates is that numerous economic barriers exist that the proliferation of RNG. It is crucial to address those economic barriers in order to be able to make RNG a player in the renewable economy. Additionally, as noted in an article in Vox, "There isn't enough RNG to go around". The article went on to say that, "The main question facing RNG is simple: Is there enough of it to decarbonize existing uses of natural gas, like buildings? Several states have looked into this closely. The answer, in a word, is no." As noted previously, there are strategies that can be utilized with bioconversion systems that use biomass as a feedstock that turn to the answer to this question to be "Yes".

Follow-up articles to this piece will address:

If RNG is a mixed bag of good and bad news in the U.S., I'm curious how it's looking globally? Are there any regions that are leading in these types of opportunities?

Thanks for your comment and question. I am not sure how RNG is doing around the world. I know that the folks with the RNG Coalition are very committed. Here's my two cents on your regions question.

I think any region is a good bet. Based on work we're doing now in Texas, it is obvious that anyone that is producing organic by-product (biomass) can be a profitable renewable products generator if they go the "full monty." That is, instead of just making biogas, make multiple renewable products out of the feedstock and make little or no digestate. Converting the digestate solids to biogass and fertilizer is a much better value proposition. The logjam with anaerobic digesters is that they get at best 55% converion of biomass. If you get that conversion up to 80 to 90%, you produce much more energy and you can harvest water and fertilizer as discussed in the article. Now, one has multiple products that are all green that can make a project quite profitable. Economics 101. Some of the products such as green ammonia are in great demand by organic farmers so that can have high quality fertilizers that are also organic. This is needed so that their foods can get the "organic" stamp (see article).

Many thanks for your interest,