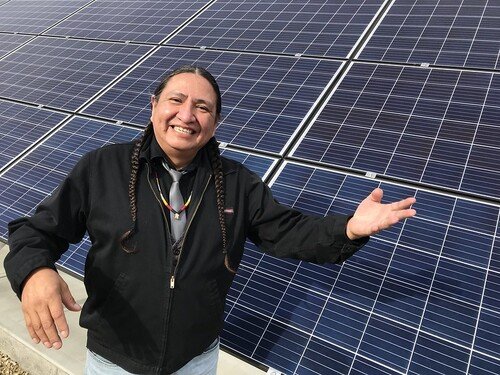 Indigenous communities in Canada are leading the way on the transition to clean energy by using renewable energy microgrids (REMs) as a pathway to community and energy sovereignty, said panelists at a COP 26 workshop session last week.

Renewable energy is a centerpiece of the global carbon-free transition, but clean energy projects by themselves “don’t necessarily achieve goals,” said Mihskakwan James Harper, an NRStor Inc. analyst from the Sturgeon Lake Cree Nation in Treaty 8, Alberta. “They help us reduce our emissions…but it’s how they’re done [that matters].”

He added that, when clean energy projects are done justly, they have “the ability to bring the [energy] generation closer to where [it is] being used, closer to the community. And this technology fosters a pathway for communities to own these assets, be a part of these energy systems.”

Harper is one of three delegates at COP 26 affiliated with Indigenous Clean Energy (ICE), a social enterprise non-profit that aims to advance Indigenous inclusion and leadership in the clean energy economy.

More than 70% of remote Indigenous communities in Canada use diesel generators for power, writes the Pembina Institute. On top of the negative impacts on health, environment, and climate, community autonomy and economic stability are stifled without alternative sources of power. Many Indigenous communities are looking to cut their dependence on diesel by switching to renewable energy to further their goals of self-governance and energy sovereignty.

The communities are now leading the way to a clean energy transition, said ICE Managing Director Eryn Stewart. Across Canada, there are 197 medium-to large-scale projects that have 25% equity ownership by Indigenous communities, far more than the number of projects in Canadian municipalities.

One of those communities is the Kiashke Zaaging Anishinaabek—Gull Bay First Nation in Ontario, where the Giizis Energy Solar Storage Micro Grid Project supplies 25% of the energy previously generated by diesel fuel, explained Mashkawiziiwin Energy Projects Coordinator AJ Esquega. The project is entirely owned by the community.

Another streamed video featured Dana Tizya-Tramm, chief of Vuntut Gwitchin First Nation in Old Crow, Yukon, discussing a similar project that he says is “just the tip of the iceberg.” The community drafted documents and negotiated with a local power company to outline “the first electricity purchase agreement and independent power producing frameworks of their kind.” Under that deal, C$410,000 per year will be diverted back into the community instead of being exported to shareholders in a utility.

But the projects are about more than just energy sovereignty, said Tizya-Tramm. “It touches every sphere from economics, industries, leadership, and governance” to help support the community. And “one thing that I think is the panacea to climate change is community,” he emphasized.

“Our community members are already beginning to experience the shift towards a clean energy future, with many of our homes experiencing lower energy bills, better air quality, and more efficient homes and heating systems,” she said. Heiltsuk First Nation is also exploring options for engaging in carbon markets and harvesting kelp as feedstock for biodiesel.

Community REMs in Action was one of three sessions ICE delivered during COP 26 to draw global attention to the power of microgrids. The purpose of that presence is to “bring forth Indigenous clean energy voices at the heart of a clean energy transition,” Freddie Huppé Campbell, global hub program coordinator for ICE, told the Globe and Mail.

“We also would like to hold governments accountable to their words,” Campbell added, “and really push forward and hope to impact systems of change and policy.”

But the projects are about more than just energy sovereignty, said Tizya-Tramm. “It touches every sphere from economics, industries, leadership, and governance” to help support the community.

This aspect is the beauty of the increasingly decentralized energy sector-- democratizing many of the benefits. It's terrific that the indigenous communities can especially identify and take advantage of these aspects.