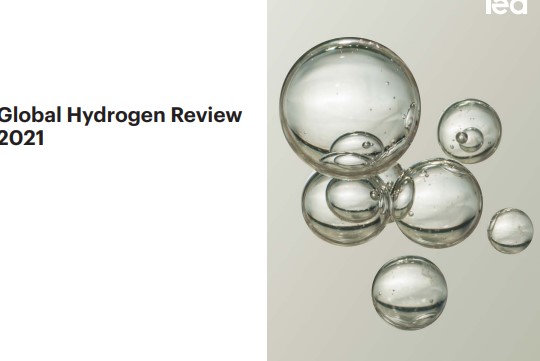 Executive Summary After several false starts, a new beginning around the corner The time is ripe to tap into hydrogen’s potential contribution to a sustainable energy system. In 2019, at the time of the release of the IEA’s landmark report The Future of Hydrogen for the G20, only France, Japan and Korea had strategies for the use of hydrogen. Today, 17 governments have released hydrogen strategies, more than 20 governments have publicly announced they are working to develop strategies, and numerous companies are seeking to tap into hydrogen business opportunities.

Such efforts are timely: hydrogen will be needed for an energy system with net zero emissions. In the IEA’s Net Zero by 2050: A Roadmap for the Global Energy Sector, hydrogen use extends to several parts of the energy sector and grows sixfold from today’s levels to meet 10% of total final energy consumption by 2050. This is all supplied from low-carbon sources. Hydrogen supplies are becoming cleaner … too slowly Hydrogen demand stood at 90 Mt in 2020, practically all for refining and industrial applications and produced almost exclusively from fossil fuels, resulting in close to 900 Mt of CO2 emissions. But there are encouraging signs of progress. Global capacity of electrolysers, which are needed to produce hydrogen from electricity, doubled over the last five years to reach just over 300 MW by mid-2021.

Around 350 projects currently under development could bring global capacity up to 54 GW by 2030. Another 40 projects accounting for more than 35 GW of capacity are in early stages of development. If all those projects are realised, global hydrogen supply from electrolysers could reach more than 8 Mt by 2030. While significant, this is still well below the 80 Mt required by that year in the pathway to net zero CO2 emissions by 2050 set out in the IEA Roadmap for the Global Energy Sector. Europe is leading electrolyser capacity deployment, with 40% of global installed capacity, and is set to remain the largest market in the near term on the back of the ambitious hydrogen strategies of the European Union and the United Kingdom.

Australia’s plans suggest it could catch up with Europe in a few years; Latin America and the Middle East are expected to deploy large amounts of capacity as well, in particular for export. The People’s Republic of China (“China”) made a slow start, but its number of project announcements is growing fast, and the United States is stepping up ambitions with its recently announced Hydrogen Earthshot. Sixteen projects for producing hydrogen from fossil fuels with carbon capture, utilisation and storage (CCUS) are operational today, producing 0.7 Mt of hydrogen annually. Another 50 projects are under development and, if realised, could increase the annual hydrogen production to more than 9 Mt by 2030. Canada and the United States lead in the production of hydrogen from fossil fuels with CCUS, with more than 80% of global capacity production, although the United IEA. All rights reserved. Global Hydrogen Review 2021 PAGE | 6 Executive summary Kingdom and the Netherlands are pushing to become leaders in the field and account for a major part of the projects under development.

This week, Policy Dispatch chats with Agora Energiewende expert and FORESIGHT's own Michaela Holl about the EU's response to the ongoing energy crisis.

Toward a cross-border, global hydrogen commodity market For the hydrogen traded market to develop, key market mechanisms and structures will be required. These may evolve in line with other commodities, but with key differences. In parallel..

The Brande project will inform our technology roadmap as interest and capabilities in the entire green hydrogen production value chain. We are investing internally, talking to governments and regulators and are engaging across the entire ecosystem Larry commented on ...
Puerto Rico needs an underground transmission system
Henry: Thanks for posting this. A couple of years before Hurricane Maria, my firm was pursuing a renewable energy project for a larger private...

Xavier commented on ...
Puerto Rico needs an underground transmission system
Thanks Henry for your post!