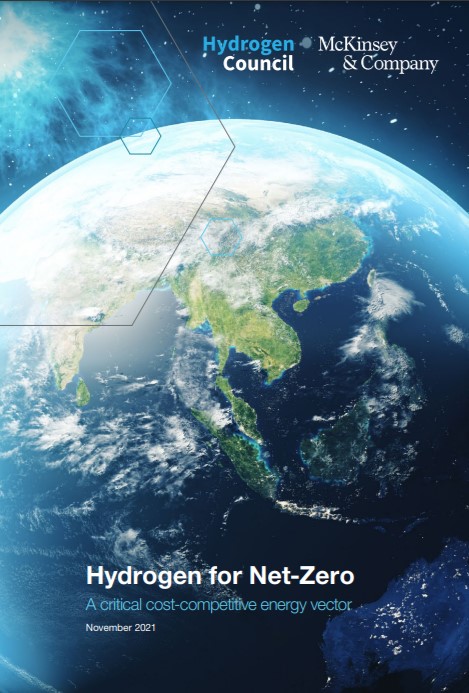 Current industrial uses: A large share of the decarbonization will come from current industrial uses of hydrogen with 270 MT of CO2 avoided a year, particularly from the decarbonization of refining and ammonia synthesis. These applications are among the most attractive uses for early deliverable low-carbon hydrogen, at carbon abatement costs for high-purity emission streams of USD 50 to 100 a ton in most regions. Ground mobility: In the ground mobility sector hydrogen could avoid about 90 MT of CO2 emissions in 2030.

By about 2030, hydrogen-powered vehicles (e.g., heavy-duty trucks, coaches, long-range passenger vehicles, and rail) could achieve cost parity with internal combustion engine (ICE) vehicles, leading to a significant scale-up. Given heavy payloads and long distances traveled, trucks account for the biggest share of the abatement. With a share of about 11% of global heavy-duty truck sales in 2030, emissions of about 60 MT of annual CO2 emissions would be avoided – as much as 22 million battery-electric passenger vehicles. Hydrogen-based fuels: Fuels based on hydrogen, e.g., ammonia, methanol, e-methane, e-kerosene, or liquid hydrogen, are the most promising scalable alternatives to decarbonize aviation and maritime applications above and beyond biofuels where feedstock availability is limited.

The early adoption of hydrogen in these sectors will be driven by regulators and industry commitments, and while hydrogen adoption in 2030 will be relatively low in these segments at about 1% and 6%, it lays the foundation to decarbonize these sectors longer-term by up to 60% by 2050.

Steel: While requiring larger initial investments, the use of hydrogen in steel represents a large, cost-effective decarbonization lever for 2030, with 880 MT of CO2 abated by then. A carbon cost of less than USD 50 to 100 a ton can make hydrogen-based steel production competitive in many locations due to the significant emissions of 1.85 tons of CO2 per ton of steel produced from coking coal. Steel could account for about 4% of hydrogen demand in 2030 while driving nearly 20% of emissions reductions that year.

The early adoption of hydrogen in these sectors will be driven by regulators and industry commitments, and while hydrogen adoption in 2030 will be relatively low in these segments at about 1% and 6%, it lays the foundation to decarbonize these sectors longer-term by up to 60% by 2050.

These are long-term investments, definitely can be a challenge to get businesses on board when the pay offs are that far out. That's why a policy backing can be so critical

Matt, the "payoffs" are deliberately predicted that far out for a simple reason: not only will they never happen, they were never meant to happen.

Hydrogen is a fraud, intended to maintain dependence on natural gas. The only responsible policy would be prosecuting those making obscene promises they never intend to keep. I will stand by that conviction until presented with conclusive evidence to the contrary.

Bob, how do we fully decarbonise electricity generation, transport, and heat without hydrogen? What's the alternative?

"...how do we fully decarbonise electricity generation, transport, and heat without hydrogen? What's the alternative?"

Nuclear energy, generated as needed. Everything else is an expensive distraction.

If a clean liquid fuel is needed in the short term to de-carbonize transportation, making hydrogen from water using renewable energy is probably the worst way to go about it. We would be using the most diffuse sources of energy to make the least energy-dense fuel of all - a fuel that can power an infinitesimal fraction of vehicles on the planet.

There are several energy-dense liquid fuels that wouldn't need to be refrigerated to -253°C and/or pressurized to 10K PSI to be mobile, and could power (with some modification) existing gasoline-powered vehicles:

Made with captured carbon/nitrogen, water, and nuclear energy, they're 100% carbon-neutral.

Bob, what's the alternative in a country where nuclear power is constitutionally banned, and un-banning it is in all probability, next to impossible?

Good question, Daniel. IMO there is no alternative.

That doesn't mean it's impossible anywhere, or even improbable. New nuclear was all but banned in the Netherlands for fifty years, when in December a new coalition government reversed course. Now, the country plans to have two large-scale plants in service by 2025.

And it's not only happening because of climate change. The situation in Ukraine is showing countries in Western Europe how dangerous energy dependence can be.

This claim seems particularly fanciful.  There are Japanese power companies which are being pressured to keep their existing (safe, clean, zero CO2-emitting) nuclear plants off-line and pursue other options instead.  Some have offered to keep burning dirty coal, but to "co-fire" the coal with a small fraction of carbon-free imported ammonia.  By increasing the ammonia fraction over time, they can forecast modestly decreasing CO2 emissions and air pollution deaths (and steadily increasing per-kWh costs) for many years, reaching perhaps 30% reduction for each coal-fired plant.  That's a completely insane solution (ammonia costs much more than coal or gas) compared to the obvious alternative: use nuclear instead of fossil fuel.

Advocates will ask, why not just use renewables instead?  There are only two ways to use (variable) renewables in a power grid while addressing the variability: blended with (dirty) fossil fuel, or massively over-built, with the excess used to make hydrogen.  The problem with the hydrogen route is that in all plausible scenarios, the resulting "green" hydrogen costs more than hydrogen made from fossil fuel, and much more than burning fossil fuel directly.

So the offered solution is to kick the can down the road, and say, we won't use hydrogen, but our grandkids might.

We should admit that variable renewables are a relic of the fossil fuel era, and instead take the technically easier solution (even though for some it will be emotionally harder): nuclear.  With nuclear, we can decarbonize our power grids with less over-building and therefore less hydrogen that needs a buyer.  We can use waste heat from nuclear plants to power district heat networks to provide space heat to our cities.  We can use heat from high-temperature nuclear plants to replace fossil fuel heating in many industrial uses.  Nuclear powered tugs can move cargo ships across the seas.  And what little hydrogen/ammonia fuel that is produced from the excess nuclear electricity (which exceeds the needs of the fertilizer industry) can be used, not to replace cheap coal and gas, but expensive gasoline and diesel for buses, airplanes, ships, trains, long-haul trucks, and construction equipment.