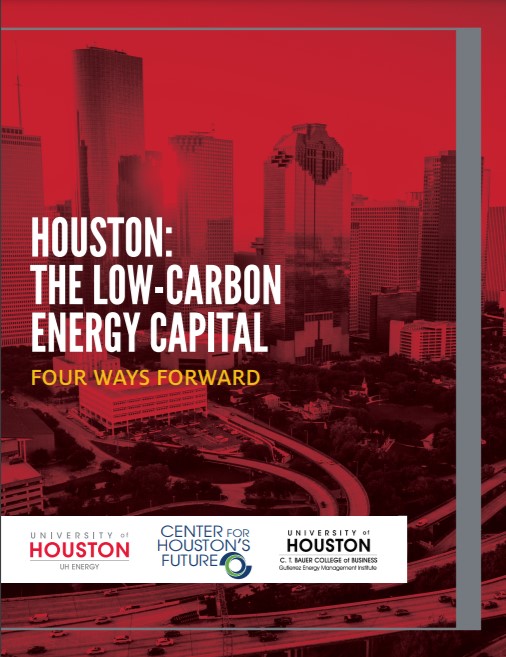 As this report, emanating from the University of Houston and partners, states, the world is moving to an energy future that involves reducing the environmental impact of energy use while ensuring modern energy access for a growing global population. This will require reducing the emissions of existing hydrocarbon fuels, developing renewable energy sources and deploying new energy use and energy efficiency technologies.

The Houston region can lead the global energy transition while reducing the region’s carbon emissions, which are estimated at around 50 million metric tons per year for the industrial sector alone.

Among the report's key findings:

• Carbon management technologies could remove more than 12 million tons of carbon per year by 2030, focused on industrial sites in the greater Houston area. CCUS also will be a crucial enabler of other emissions reduction strategies, including hydrogen, petrochemicals and renewables integration.

• Houston, already anchoring the world’s premier hydrogen system in terms of production and pipeline and storage infrastructure, has the potential to globalize its leadership by exporting clean hydrogen to meet growing demand stimulated by decarbonization initiatives globally.

• Texas can reduce the carbon intensity of the grid by 78% by 2050, even without energy storage, with 55% wind, 19% solar and 6% nuclear generation. With the addition of lithium ion battery storage and compressed air energy storage, the grid could be almost 90% carbon-free.

• Chemical and heat-based methods of breaking down plastics for recycling could provide an alternate route to produce feedstock for chemical and petrochemical facilities across the Houston region. The effort could remove 10 million metric tons of CO2 by 2030, while supporting 100 advanced recycling facilities by 2030, each capable of processing 25,000 tons per year and supporting a total of 15,000 jobs and half a billion dollars in payroll.

The Houston Region as a Global Hydrogen Hub

Hydrogen is generating increased attention for its significant potential as an anchor in a low-carbon future, amid growing momentum for decarbonization around the world. Since the start of 2020, regions and countries have detailed critical roles for hydrogen in meeting decarbonization goals, including the European Commission, Germany, The Netherlands, Norway, Portugal, Spain and France.

Preeminent energy companies such as Shell, BP and Repsol have announced hydrogen plans to help meet their low carbon goals. As such, the global hydrogen market is expected to grow by some $800 billion by 2050. Total market projections, including hydrogen gas and related technologies such as electrolysis and fuel cell equipment, are estimated by the Hydrogen Council as $2.5 trillion in 2050.

Greater Houston already anchors the world’s leading hydrogen system, which produces approximately one-third of the country’s total hydrogen gas annually. It’s built on an expansive network of more than 900 miles of hydrogen pipelines – more than half of the country’s hydrogen pipelines and one-third of hydrogen pipelines globally – and geologically unique, substantial salt cavern storage capacity. The system primarily serves Gulf Coast refining and petrochemical operations. By leveraging this system, the area has the potential to bring substantial volumes of hydrogen to new markets rapidly and at scale and doing so in ways that would curb regional emissions. Our research identified additional promising early targets including regional trucking – cutting emissions by replacing diesel with hydrogen - and exporting to markets that offer incentives to use hydrogen such as California.

To help catalyze local efforts, we propose demonstration pilots in the next few years that would focus on our existing hydrogen system, which primarily uses steam methane reformation technology, or SMR, to separate hydrogen from methane. That results in grey hydrogen. Applying carbon capture, utilization and storage (CCUS) technology to the SMR process pulls out carbon emissions, creating what is referred to as blue hydrogen, which would reduce carbon emissions by 15 million tons per year if installed across the existing grey system. Over time, a blue system anchored in Greater Houston could be a major hydrogen exporter as several markets across the world are projected to not have enough hydrogen to meet their decarbonization goals.

The Greater Houston area is also primed to create no-carbon green hydrogen, produced by splitting a water molecule via electrolysis, which is a power-intensive process. Texas is the No. 1 state in installed, low-priced wind power and has a growing solar market that could help expand low price hours and support more electrolysis. As well, using hydrogen as a means of energy storage offers the potential to add more renewables onto the Texas power grid by balancing renewable power intermittency.

These initiatives could cost between $600 million and $900 million by 2030 and require targeted policy and public funding to allow for new infrastructure, equipment incentives and permitting. Building on these activation efforts – as part of a three phased approach to activate, expand, and rollout the H2 economy – Houston could capture further value from both new regional and export markets by expanding the CCUS system to add additional existing Gulf Coast SMRs – as well as building new grey hydrogen capacity, potentially using newer technology such as autothermal reforming (ATR). This would further leverage the Houston region’s extensive scale and cost advantages across the chain: proximity to reservoirs for carbon use in enhanced oil applications or for carbon sequestration, access to low cost methane, abundant hydrogen storage capacity, and extensive port commodity export capabilities.

Houston has the potential to globalize its leadership in hydrogen, becoming the leading global hydrogen production and trading hub as blue and green technologies advance and costs decline – presuming that appropriate policy frameworks are created to incentivize nascent carbon and hydrogen markets.

By 2050, those impacts could grow by at least a factor of three. Houston already has a highly skilled energy workforce, along with the academic institutions that can prepare the workers of tomorrow.

The region also has the initial infrastructure in place, the technology innovation and policy innovation pipeline and the global partnerships to do this at scale and with urgency. The assessment identifies what’s feasible and lays out a pathway to decarbonize the region and maintain Houston’s role as the world’s energy leader during the energy transition.

Curiously the report, built around its four pillars, doesn't cover the glaringly obvious tie-in presented by offshore wind and 500GW being explored by BOEM. Click the link below for this overlooked fifth way forward which, in the interests of low-carbon thoroughness, I add to the Houston equation:

Stay informed through me and industry trailblazers at the: Hydrogen for America Professionals Group